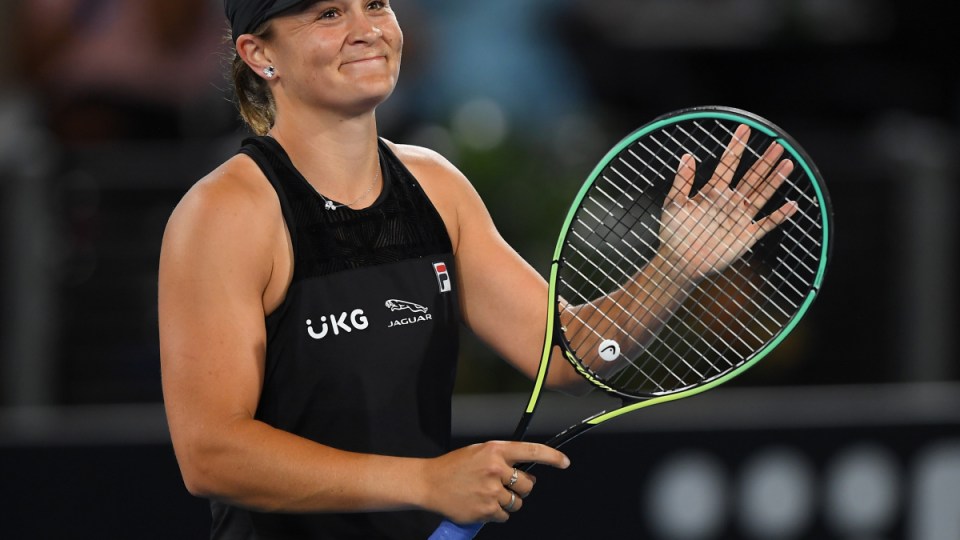 Should Ash Barty lift the Daphne Akhurst trophy, the celebrations will trump all that has gone on elsewhere this month. Photo: Getty

This year is not, should we forget, the first time Tennis Australia has misread the public mood on vaccinations.

“With vaccinations on the way, rolling out in many countries around the world, it’s now a time for optimism and hope,” Ms Hrdlicka said. Roundly booed, she then thanked the state government.

“Without you we could not have done this.”

It was comical then and now, the Open that ended on a sour note morphing into a larger 2022 mess much of TA and governmental making.

However, there is hope. Dig beneath the Djokovic debacle and this Australian Open is shaping up as a belter.

Let’s start with the absolute.

Should Ash Barty lift the Daphne Akhurst trophy on Saturday week the celebrations, in Australia at least, will trump all that has gone on elsewhere this month.

It is the great ‘get out of jail’ card for everyone.

And she has a cracking chance.

The first three rounds, with respect, are no-brainers before defending champion Naomi Osaka looms in the last 16.

They stand at two wins apiece against each other although no match has yet been tight.

Barty, who turns 26 in April, is arguably at her peak. She has been a genuine, yet strange world No.1, topping the rankings for aeons yet with just two major titles in her bag.

But, and this in no nationalistic hubris, she is unquestionably the best woman out there.

She has never shone in Melbourne but seems more assured and knowing this time out, everything has been mapped out mentally is the feel and, one set dropped to Coco Gauff at the Adelaide international two weeks ago aside, was flawless in winning that WTA 500 tournament.

She is vulnerable – her unexpected quarter-final loss last year to Karolina Muchova was as much driven by nerves as gamesmanship from the Czech — but then Osaka and the Spaniard Garbine Muguruza, perhaps her two biggest rivals, have had their wobbles before. Go Ash.

For sheer star power though, check out Emma Raducanu, the teenage Pom who remarkably took out the US Open title as a qualifier last September and is a template for focus and self belief.

Seeded 17 here, it’s a huge ask for a Raducanu repeat this month, but compose herself as she did in New York and you never know.

The 2017 US Open champion Sloane Stephens is match number one for Raducanu.

Sam Stosur won’t win the AO crown, this year or ever, but in her final singles appearance at Melbourne Park she faces fellow wildcard Robin Anderson.

It’s low calibre in theory, Anderson is ranked 172 with Stosur languishing at 480.

Stosur is our under-the-radar superstar, her achievement in beating Serena Williams in her backyard to win the US Open on the 10th anniversary of 9/11 is one of Australia’s outstanding sporting feats and she should be feted far more in retirement than she has been in playing.

To the men, where ‘he who shall not be named’ notwithstanding, one man can dominate.

Runner-up here 12 months ago, Daniil Medvedev is the current US Open champion and will rise to No.1 in the rankings if he is crowned champion next week.

An immense talent, nicely quirky and fully vaxxed, the Russian will take some stopping.

There is a consensus that Alexander Zverev and Stefanos Tsitsipas, with his enormous swell of local partisan support, will forge the next rank of contenders but they are mere minnows when set against the two giants of any sport still in this field.

No man has more major titles ever than Rafael Nadal.

He has underachieved in Melbourne, just one crown in 2009, but has contested four more finals, two of which in 2012 and 2017 he may still feel aggrieved he didn’t win.

He can play on the blue cushion courts beautifully and has an ATP 250 title, in Melbourne, already this year. Don’t discount Rafa – there would not be a more popular men’s champion.

Andy Murray is a longer shot.

Three years ago in the media room at the AO, the Scot was teary as he talked about the pain and difficulty of playing on with his disintegrating hip. It was deeply affecting: A great champion (and runner-up at Melbourne Park five times) on the very cusp of calling it a day.

Staggeringly, after various hip surgeries and rehabilitations, he is back and reached the Sydney International final last Saturday. As with Stosur, he is unlikely to win but remains a colossus.

Every year the first week of the AO is the Nick Kyrgios show, as part of the furniture as Djokovic is to the final few days.

This year the consummate entertainer has COVID. Will he, won’t he, make it? Probably. Kyrgios is a godsend to the tournament, bringing the infuriating, raised and dashed hopes, and dabs of genius.

Last year, Nick tagged up with his buddy Thanasi Kokkinakis, in the doubles at Melbourne Park. It was a hoot, faux seriousness, exhibition stuff and they didn’t get far.

Kokkinakis is 25 now and probably known more for his injuries and setbacks than his achievements.

This though, is changing fast. A blistering week at the 250 Adelaide International saw him clinch his inaugural ATP title on Saturday evening, his high-profile victims including Marin Cilic in a thrilling semi-final that went into the early hours on Saturday.

“The biggest thing for my confidence is just being able to back up and do it match after match,” he said. “That’s something that I haven’t proven in a long time.”

Momentum is on his side with eight wins over the past two weeks (across two tournaments), one more than it takes to win a major.

“I’m happy, I’m on the front foot, my body feels great. Onwards and upwards,” said Kokkinakis, who plays the German qualifier Yannick Hanfmann first up with Nadal due in round two, a banker for night-time on Rod Laver Arena.

Nadal has had enough of the vaccination saga, he says.

We all have and, thankfully, it’s now up to the players to reclaim their sport’s standing.

The Stats Guy: What does tourism in Australia look like now that travellers are returning?
Novak Djokovic has flown out of Melbourne. That won’t end the saga
Today's Stories

Beneath the Djokovic saga, the Australian Open shapes up to be a classic