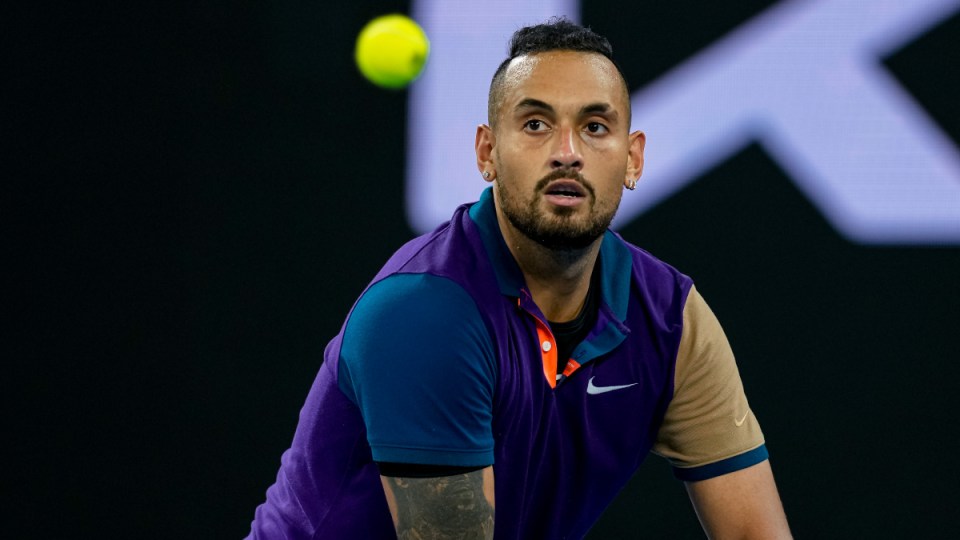 Kyrgios is a godsend to the tournament, bringing the infuriating, raised and dashed hopes, and dabs of genius. Photo: Getty Photo: Getty

Controversial tennis star Nick Kyrgios has claimed the 2022 Australian Open should be cancelled, declaring it is “morally wrong to force someone to be vaccinated”.

Australia’s former No.1 ranked tennis player, Kyrgios said his home grand slam should be scrapped to “send a message” to Melburnians, after a prolonged two years of COVID-19 lockdowns in Melbourne.

“I don’t think the Aus Open should go ahead, just for the people in Melbourne – you’ve got to send a message,” Kyrgios told his No Boundaries podcast.

“How long did [Melbourne] do in lockdown? 275 days or something?”

Kyrgios showed support for his on-court rival Novak Djokovic, who remains silent about his vaccination status, and other unvaccinated sportsmen, including Melbourne-born basketball player Kyrie Irving.

Kyrgios added that he was double-vaccinated.

Djokovic has long resisted revealing his coronavirus vaccination status, saying it is a “private matter”, while Brooklyn Nets star Irving has been banished from playing in the NBA as he remains unvaccinated.

“Kyrie, Novak … These guys have given so much, sacrificed so much. They are global athletes who millions of people look up to,” Kyrgios said.

“I just think it is so morally wrong to force someone to be vaccinated.

“I’m double vaccinated, but I just don’t think it’s right to force anyone [to be vaccinated] and say ‘you can’t come and play here because you’re not vaccinated.”

In 2021, the Australian Open was contentiously delayed a fortnight as a result of quarantine issues for international players.

Midway through the Open on February 12, Melbourne was forced into a snap lockdown for five days.

Victorian Premier Daniel Andrews has repeatedly denied exemptions for unvaccinated players for 2022, as part of the state’s strict vaccination rules.

As a result, Djokovic is unlikely to play when the Australian grand slam begins on January 18.

Kyrgios said there were “other solutions” to allow unvaccinated players to play in the tournament safely.

“There are other solutions around it, [such as] to get tested every day,” he said.

“In the [United] States I know they’ve got rapid tests, and it’s coming to Australia. It’s 85 per cent success rate, you wait 15 minutes and then you’re allowed to play.”

Dennis Atkins: Morrison lost an election he should not have lost. And he still doesn’t get why
Roger Federer likely to miss Australian Open
Today's Stories

‘Send a message’: Kyrgios says Australian Open should be scrapped