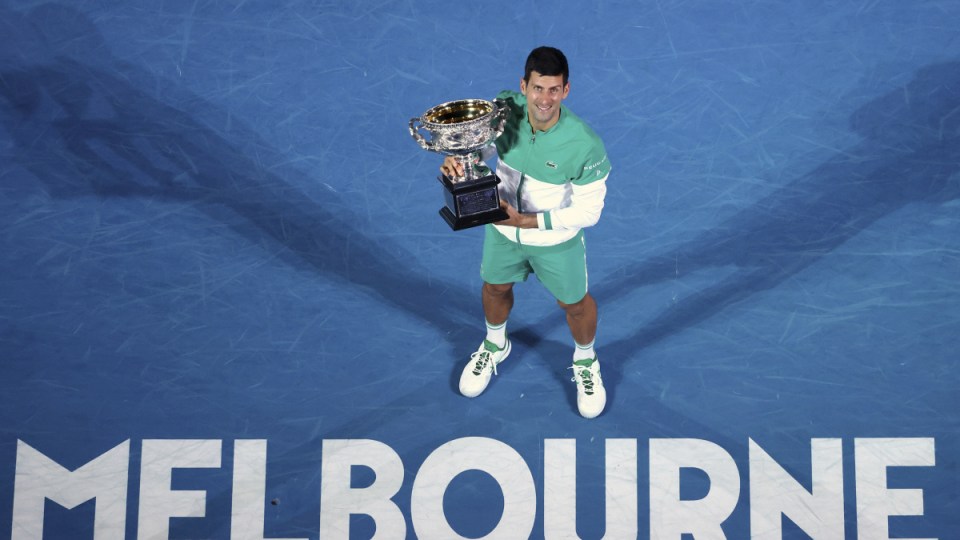 Then and now: Novak Djokovic was celebrating his latest title in 2021. Now the champion is an outcast. Photo: AAP

Novak Djokovic remains in doubt for the Australian Open, saying he’s awaiting a final announcement on travel and entry requirements before committing to another title defence at Melbourne Park.

But Victoria Premier Dan Andrews slammed that door shut, insisting — just like unvaccinated fans — that unjabbed players would not be allowed into Melbourne Park.

Djokovic, who tested positive to COVID-19 last year, has repeatedly declined to reveal his vaccination status.

Victoria has introduced a vaccination mandate for professional athletes as it battles a resurgence of coronavirus cases.

Djokovic was non-committal when asked on Sunday in Paris about the likelihood of contesting the Open.

“Well, I’m going to decide on whether I go to Australia or not after I see the official statement from Tennis Australia,” the world No.1 and nine-time Open champion said, in his first press conference since his US Open final loss to Daniil Medvedev in September.

“Right now, we don’t have any official announcement or statement. So until that’s out, I won’t be talking about this anymore, because I don’t want to be part of the stories about the assumptions and what-ifs.

“When official condition requirements to travel to Australia and play in Australia are out, then obviously I’ll see what I personally do with that, and also the bigger group of the players, you know, because the situation is obviously different in Australia than most parts of the world.”

Djokovic was forced to apologise after staging a charity event in Serbia in 2020 with no social-distancing measures in place, after which a number of players, including the 20-times grand slam champion himself, tested positive for the virus.

Making his return at this week’s Paris Masters, Djokovic is focused on finishing as year-end No.1 for a record seventh time.

“The year-end No.1 is on the line between Medvedev and myself,” he said.

“So that’s obviously the goal for the end of the season, other than trying to do well in the Davis Cup with the national team.”

Runner-up in this year’s Australian Open final to Djokovic, a coy Medvedev also wouldn’t confirm his participation at Melbourne Park.

While eager to play, the Russian is also refusing to disclose his vaccine status.

“I always said it, that I really like Novak’s answer about this. No matter if it’s about vaccine, leg injury, head injury … I want to keep my medical private for a reason,” Medvedev said on Sunday.

“I feel like tennis is such a brutal sport where you’re always one on one against your opponent, and any information you give him can go against you.

“But I won’t say if you’ll see me there, but we’re going to see in January.”

Medvedev, who will finish his year after the Davis Cup Finals in early December, called for officials to shorten the length of the season and reduce the workload of players.

“We’re probably the only top sport that is playing 11 months a year,” he said.

“So you’re going to have like two-and-a-half weeks of the off-season to prepare for Australian Open, which is obviously not enough.”

Western Australia: The state that made Anthony Albanese Australia’s next prime minister
Unvaccinated stars may still be at Australian Open
Today's Stories