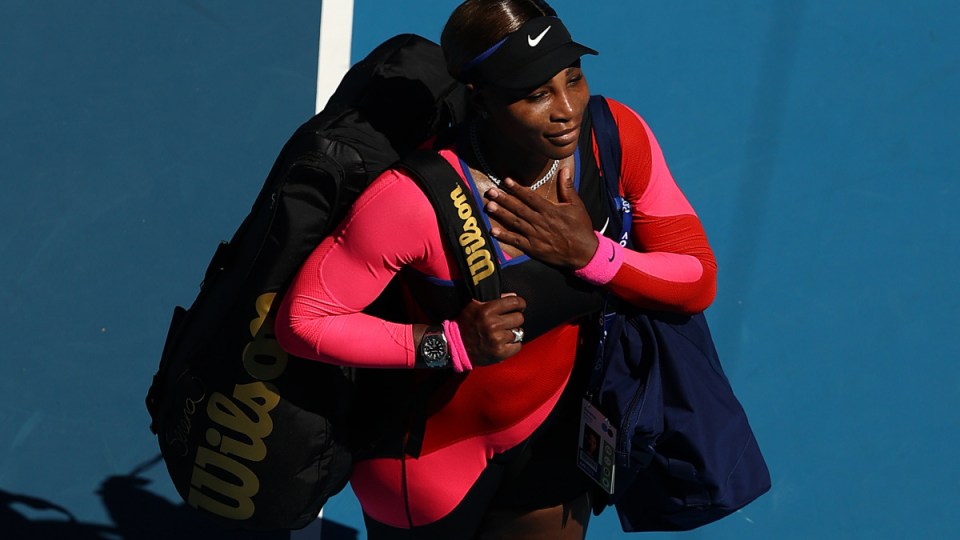 Serena Williams just played in her 20th Australian Open. Could it be her last? Photo: Getty

As Serena Williams stepped off Rod Laver Arena after a crushing semi-final loss to her heir apparent, Naomi Osaka, she stopped for more than a few seconds to soak in the ovation from a rapturous Melbourne crowd.

They had just watched the seven-time Australian Open winner once again fall devastatingly short of adding to her remarkable tally and a chance to rewrite history as her 77th grand slam tournament came to a close.

Williams stood still, hand on heart, eyes closed; a gesture to a crowd that both said so much and so little in unison.

Was this a moment hinting this could be the last time Melburnians would ever see a living legend play on the True Blue plexicushion?

Or was it simply a mark of appreciation of their support in a match where her killer instincts and supreme athleticism – omnipresent in her opening five matches on centre court – abandoned her?

Williams revealed little – or perhaps even more – when she faced reporters and a legion of Microsoft Teams talking heads in her post-match press conference.

When asked whether the touching moment was her saying goodbye to the Happy Slam, Williams – who appeared guarded throughout her three-minute interview – was coy.

“I don’t know … if I ever say farewell I wouldn’t tell anyone,” she said.

Was this just a bad day at the office?

“I don’t know … I’m done,” she said tearfully and then abruptly cut the conference short.

The 39-year-old later took to Instagram, as any world-beating athlete in the age of social media would, to address Melbourne’s devotees directly, along with an image of her arms outstretched like a goddess.

“I am so honoured to be able to play in front of you all,” she wrote.

It was a poignant response compared to her previous losses in Melbourne. And her hesitance to directly address the elephant in the room only inflamed discussions around her future.

“You start to think: If not now, when? She’ll still be 39 at Wimbledon. But now it’s four-plus years since her last major. You can see Osaka is 16 years younger than she is.”

With that said, it’s worth remembering the longevity of Williams’ career is almost unrivalled.

Although names like Osaka and Barty – more than 15 years her junior – are her on-court contemporaries, her actual like-aged rivals (with the exception of sister, Venus) are well into retirement.

Justine Henin, who retired in Melbourne a decade ago and is a mother of two children, told Eurosport yesterday there was “no way, no chance” of her ever producing results like Williams again, according to The Guardian.

Although Williams was unable to actively work on her movement in the off-season (thanks to an Achilles injury sustained in New York last year), her defensive work and hustle through the last fortnight was at its best since her comeback.

However, grand slam number 24 has proven elusive since winning the Australian Open while pregnant in 2017, as her traditionally clutch play deep in major tournaments has given way to uncharacteristic meekness.

She’s made four major finals since, losing each in straight sets. And after going 21-4 in her first 25 grand slam finals, her final record sits at 2-6 since the 2015 US Open.

With internal and external expectations weighing heavy, the pursuit of ultimate success may be undone by her knowledge of the legwork and mental drive it takes to win seven matches in a row at a major.

“When you’re chasing big things that are related to the history of the sport, obviously it has a lot of weight, a lot of pressure. And regardless of the amount of years that you have played on the tour and the experience that you have, you still feel it on your shoulders,” Novak Djokovic, who is also closing in on an all-time record, said on Thursday.

“I know that when you lose a big match you’re frustrated. You’re pissed off and you’re emotional. Of course, it’s completely understandable.”

During her on-court interview on Sunday following her stunning straight-sets victory over Simona Halep, Williams let slip to Nine’s Jim Courier she may be working on a follow-up to her documentary Being Serena, which chronicled her career since motherhood.

“There could be something in the works on the low, we’re just deciding the best way and the best time to release it,” Williams said.

With videographers following her moves through Melbourne Park, on the practice courts and a stint in hotel quarantine, Thursday’s events may have just unveiled the true nature of what could be a final project.