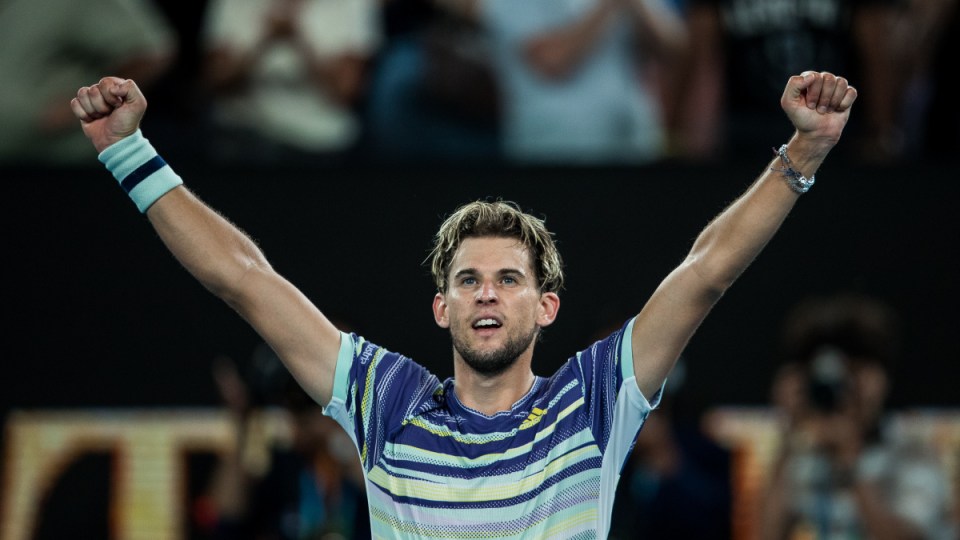 Dominic Thiem conquered recurring nerves and the hangover of his heroics against world No.1 Rafael Nadal to settle a bout with Novak Djokovic for the Australian Open men’s singles title.

The fifth seed toughed out a gritty 3-6 6-4 7-6(3) 7-6(4) victory over fellow next-gen phenom Alexander Zverev and again proved his credentials as a tiebreak specialist.

And it could prove to be Thiem’s breakthrough. While the Austrian trails the Serbian world No.2 in their head-to-head 6-4, those four wins came in the last five tries — the last, tellingly, on hardcourt at the ATP Finals.

But he’ll want to avoid the shaky start he put forth against Zverev.

In a match played mostly under the coolness of Rod Laver Arena roof, Thiem withstood a red-hot serving performance from the German, who averaged 81 per cent first serves over four sets.

“It was an unreal match. Again, two tiebreaks, so tough and so close. It was almost impossible to break him. But to be in the Australian Open finals is absolutely unreal,” Thiem told Nine’s John McEnroe.

The Austrian was slow to fire and was broken immediately as he struggled to find rhythm with his laser-like forehand and Zverev opted for reliable consistency.

He attributed his sluggish first set to the energy-sapping duel against Nadal.

“I was playing four hours against Rafa, who is the most intense guy on tour … so I was in bed at around 5:00am two days ago. So it was not easy to recover,” Thiem said.

However, as has been the trend in Melbourne, Thiem’s brave play eventually struck gold.

Breaking early in the second set reinvigorated the Austrian as he gained the ascendancy in longer, bruising rallies to level the match at one set apiece with an ace.

Both players were playing lights out tennis in a game that featured smash returns from the bleachers and back-court improvisation, and soon the stadium lights blew out.

“I like that song. I felt like I’m in Austria on skiing holidays. That’s where they play that song all the time. It was loosening me up a little bit,” Thiem said.

Back on, and a Thiem backhand passing shot handed him to a break. Zverev then won one of the most thrilling exchanges of the tournament, tracking a diving Thiem volley to launch a three-game blitz.

Thiem held his nerve to push the set to a tiebreak but then gestured to his stomach while looking towards his coaches.

“Yeah, I was feeling nerves. I was putting so much energy and effort in. My stomach was not ready for that, I think it was rebelling,” Thiem said.

“But I had a great start in all the tiebreaks. I think I was almost all the time 2-0 or 3-0 up and that gives you so much confidence.”

Combatting his internal angst, Thiem strode ahead in the tiebreak off a deft half-volley, before a blistering backhand gave him the two-sets-to-one advantage.

The final set played out like a war of attrition, with rallies going longer yet neither player able to find an inch on return. And again, Thiem stood up to the challenge.

Thiem’s final assignment is seven-time Melbourne champion Djokovic, a man he calls the “king of Australia.” And it’s familiar territory, given he’s lost to claycourt royalty at the final hurdle in Paris — twice.

“[Djokovic] won seven titles here I think, most more than any other man, so I’m always facing the kings of this Grand Slam in a final.

“But I mean I try my best and of course I try everything to win.”

Alcott one win away from sixth Australian Open crown

Alcott says he has newfound motivation after Lapthorne thwarted his bid at achieving the elusive ‘Grand Slam’ (all four major titles at once).

“I had a really tough loss at the US Open when I was trying to get the Grand Slam and I was devastated,” Alcott told Nine.

The Australian wheelchair tennis great says he enlisted the support of Ash Barty’s mindset coach to rekindle his winning ways.

“I had really high expectations of myself, but now my expectation is that I just want to be the best version of Dylan when I get out on the court and just play as well as I can,” Alcott said.

Alcott’s mission to build on his legacy starts around 3.00pm local time on Saturday afternoon.

Second seeds Kristina Mladenovic and Timea Babos went one better than their loss at the final hurdle last year, thrashing the top pairing of Barbora Strycova and Hsieh Su-Wei 6-2 6-1.

The French-Hungarian pairing followed up their win at the WTA Finals by securing their second title as a pairing at Melbourne Park, and third grand slam title overall.

And they looked unstoppable in the process — breaking their opponents’ serve half a dozen times in the 72-minute encounter.

“She’s my best friend and we go through absolutely everything together. There’s expectations, we lost early in the singles and it’s tough because we’re competitors and we wanted to do better,” Mladenovic said.

“Through doubts and whatever, I’m so lucky to have my best friend, who happens to be my doubles partner, outside of tennis.”

Sofia Kenin gears up for ‘full house’ on RLA

Before Sofia Kenin shattered the Great Australian Dream in the semi-finals, the 14th seed flew largely under the radar.

Kenin streaked to the final four without facing a seeded opponent and dropped the lone set of her campaign to 15-year-old wunderkind Coco Gauff.

Now the 21-year-old has brokered her inaugural grand slam final appearance, the average Australian may wonder: who is Sofia Kenin?

For stats nerds, Kenin stormed onto the scene in 2019, notching up three maiden titles (Guangzhou, Mallorca and Hobart), registered wins against two No.1s in consecutive weeks (Barty and Naomi Osaka), and was named the tour’s most-improved player.

Putting it bluntly, she’s no slouch and this showing is no fluke.

But of course sports fans love a good narrative. And on cue, numerous outlets have procured footage of a Moscow-born phenom meeting the sport’s biggest stars in the mid-2000s.

“It’s great to see the future of tennis, especially because she might be one of the new big stars when I’m [retired],” Clijsters said.

Wonder what else the former world No.1 envisions in her crystal ball?

As a seven-year-old, Kenin was quizzed on how she would tackle the breakneck serve of countryman Andy Roddick (for reference, his fastest-ever delivery clocked in at 249 km/h).

Hey @AndyRoddick, Sofia is into the Final.
Think she can return your serve now?@SofiaKenin | #AusOpen pic.twitter.com/0eeDTP2Tzg

Kenin could cap off her stellar fortnight by dispatching Garbine Muguruza and becoming the first American without the surname Williams to lift the trophy since Lindsay Davenport in 2000.

Quote of the day

Coming up on Saturday …

Rod Laver Arena, not before 3.00pm

Rod Laver Arena, not before 7.30pm