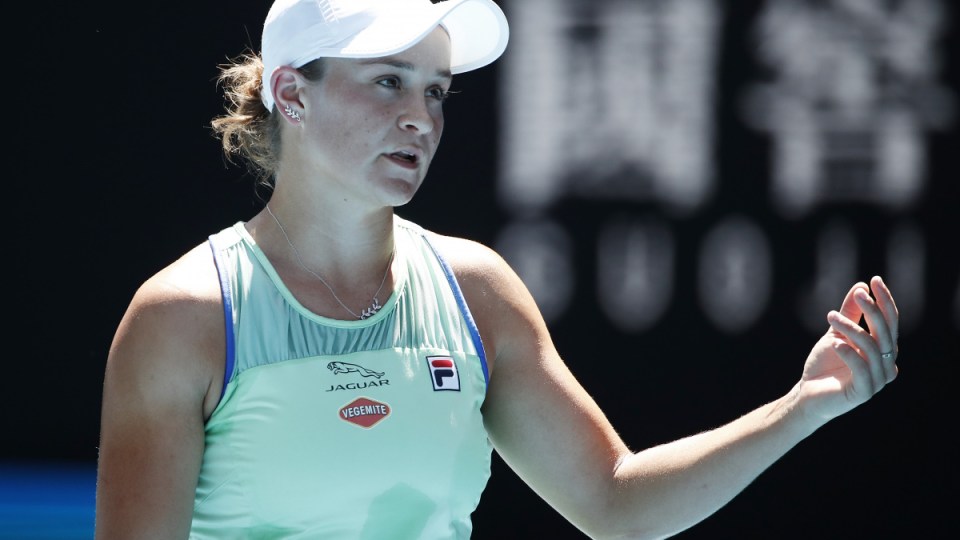 Ash Barty appeared to struggle in the Melbourne heat during the opening set of her semi-final. Photo: Getty

The Great Australian Dream of a grand slam singles winner on home soil has gone begging for another year.

Barty looked well below her prime, striking 36 unforced errors for the match and only finding her first serve 50 per cent of the time.

In contrast, the 21-year-old Moscow-born Kenin was unflappable under the pressure of her first grand slam semi-final.

Clutch Kenin@SofiaKenin collects a 7-6(6) 7-5 win over world No. 1 Barty to reach her first Grand Slam final and become the youngest Melbourne finalist since 2008.#AO2020 | #AusOpen pic.twitter.com/vPxrtFzgZU

She showed remarkable consistency in drawn-out baseline rallies and grit under pressure to book a spot in her maiden major final.

“She’s such a tough player, I know she’s playing really amazing and I needed to find a way to win. It really wasn’t an easy one, but I’m so grateful and thankful for this moment,” Kenin told Nine post-match.

“She came out with some really great shots, it was really tough, She [was never] going to give it up to me [easily].”

Barty was endeavouring to become the first Australian women’s finalist since Wendy Turnbull in 1980 – and the first since the tournament moved to Melbourne Park.

“I felt like my first plan wasn’t working. I couldn’t execute the way that I wanted. I tried to go to B and C,” Barty said post-match.

“[The loss is] disappointing. But it’s been a hell of a summer. I mean, if you would have told me three weeks ago that we would have won a tournament in Adelaide, made the semi-finals of the Australian Open, I’d take that absolutely every single day of the week.”

Thursday’s semi-final kicked off with temperatures nudging 39 degrees, and it was the world No.1 who blinked first.

Barty appeared edgy from the outset, striking nine unforced errors in the first six games – many coming off the backhand wing, as her lethal slice missed its mark.

However, first serves at integral moments saved the Australian from early trouble.

Barty only lost one point on her first serve leading into the tiebreak – despite only 53 per cent of those landing – and was the first to six games with her seventh ace.

Kenin, who helped dethrone Barty as the world’s best player by winning their encounter in Toronto last year, displayed the talent that bestowed her the title of the tour’s most improved player.

She remained consistent from the back of the court with margin-filled tennis, and chose her opportunities to strike smartly.

Following some miraculous defensive play on serve, it was Barty who had the only break point opportunities of the set.

All three went begging with a handful of unforced errors.

What defence! Ash had no right to win that point!!! Kenin can't believe it!

Crucially, the world No.1 chose not to challenge a Kenin forehand that appeared to soar long at 6-5.

Hawk-Eye later indicated that had she challenged the call, she would have brought up a set point.

And she was made to pay in the tiebreak.

Having blown two set points at 6-4, it was a Barty return error dumped into the net that gifted Kenin the set, and an almighty American roar.

The world No.1 appeared revitalised upon resumption of play, speeding out to an early break as her exasperated younger opponent spent any spare moment drawing in long breaths in the stadium’s shadows.

Fabulous! Ash finds the mark with the backhand slice!

Barty’s momentum was building, and the attentive local crowd was lifting.

A third set appeared a foregone conclusion at 3-2, with three confidence-building backhand slice winners in a row suggesting the winds of change were blowing through Melbourne Park.

But Kenin’s nifty play helped her rback into the match.

Swatting away two Barty set points at 5-5, the American rising star conjured an outrageous angled backhand passing shot on the stretch, giving her an opportunity to break back.

Barty’s dumped forehand volley the following point made it a reality.

Holding serve, the pressure was on the world No.1.

And after a double fault, some unreal returning from the American and one plucky match point save from the Australian, Kenin stamped her final claim on the semi-final.

Kenin becomes the first American woman without Williams as her last name to reach the singles final since Lindsay Davenport in 2005, and will break into the women’s top 10 next week.

“You have to give credit where credit is due. She played the bigger points better today,” Barty said.

“In saying that, I was also a couple of points from winning the match in straight sets. That’s disappointing. But we live and we move on.”

As one player announced herself on the biggest stage of all, Garbine Muguruza – unseeded at a slam for the first time since 2014 – reminded tennis circles of the form that steered her to two major titles.

The Spaniard wound back the clock, weathering Simona Halep’s relentless counterpunching to topple the fourth seed 7-6(8) 7-5 in a high-quality clash and seal her place in a third major final.

Counted out by many tennis pundits following a disastrous year that included two first-round exits at majors, Muguruza said she never believed she would figure on the final Saturday.

“You don’t think like that [being in the final], that’s two weeks ago. You go day by day, you take each match as it comes,” Muguruza told Nine post-match.

Muguruza hoisted the French Open title in 2016, and followed it up with victory at Wimbledon the following year.

She will be bidding to become only the third unseeded player in the tournament’s history to lift the Daphne Akhurst Memorial Trophy, after Chris O’Neil in 1978 and Serena Williams in 2007.

The second semi-final pitted two former world No.1s and two-time slam champions against each other, and it was Muguruza – who now boasts a 4-0 hardcourt record against Halep – who struck first.

The physicality of the match took its toll on Muguruza as she served for the first set at 5-3, with Halep digging out a number of seemingly impossible balls to get the first set back on serve.

Muguruza saved two break points in her final service game of the set with some assertive plays, halting the Romanian’s building momentum and sending the first set into a tiebreak.

The tiebreak reflected the seesawing nature of the set.

Halep wrested back an early deficit before Muguruza conjured two set points with a centimetre-perfect serve.

Reflecting the tension, rallies grew louder, and Halep batted away the second set point with a ripping forehand down the line.

The Romanian then had her own two chances – the second lost on an exhausting 20-shot rally – before bravery at the net granted Muguruza the set.

The Venezuelan-born Spaniard would run on to win 20 of 30 net points for the match.

Halep stormed out to an early break in the second set, which Muguruza immediately countered, before the world No.4 again gained the upper hand the following game.

Serving for the set at 5-3, Halep withstood three break points, but Muguruza converted on her third, kicking off a run of four straight games to close out the match.

Playing in conditions that nearly prompted the Rod Laver Arena roof to close – the Australian Open Heat Stress Scale hit 4.9, 0.1 shy of the highest rating – Muguruza is thankful she has two days rest.

“Luckily I have 48 hours now to recover and get ready for the last match. We train all of our career to be able to play on this court, in front of this crowd,” she said.