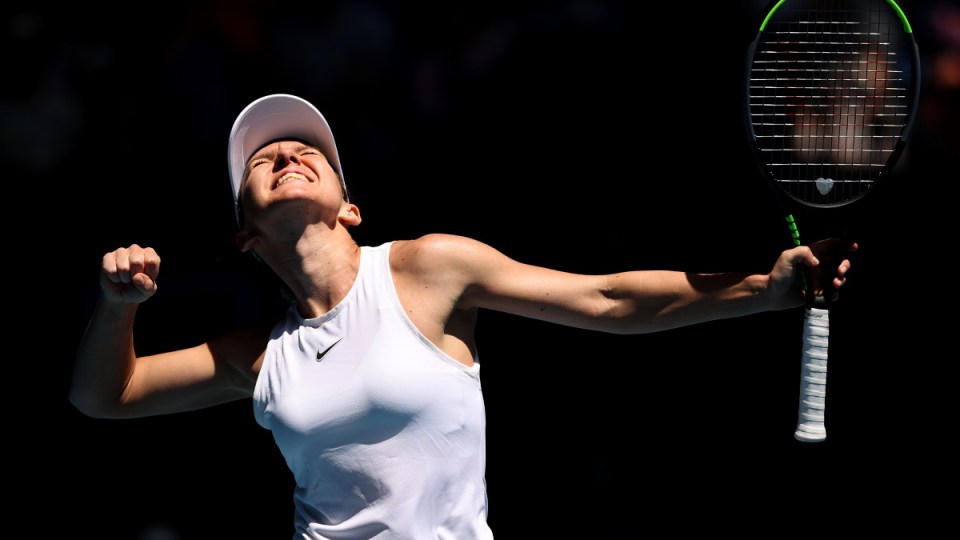 In ominous signs for Australian world No.1 Ash Barty, Simona Halep is a woman on a mission, and heads into the women’s semi-finals as the only player yet to drop a set.

But first, Halep will have to contend with raging-hot Garbine Muguruza for a finals berth.

In careers that strike remarkable similarity, the semi-final contenders have been ranked world No.1, and both hoisted their pair of grand slam singles titles at Roland Garros and Wimbledon.

The Romanian champion Halep looked simply irrepressible in a businesslike 6-1 6-1 rout of Estonian 28th seed Anett Kontaveit that was shorter than most corporate meetings.

Kontaveit, a first-time grand slam quarter-finalist, started the match on a high, securing the opening game with a perfect four from four on first serves.

From there, Halep reeled off 11 straight games, before sealing the match with two unreturnable serves.

“I felt great today on court. I feel my game, strong in my legs and I knew how to play against her,” said Halep, who now enjoys a 3-0 head-to-head record against Kontaveit.

The reigning Wimbledon champion found plenty of positives, and was bolstered by a renewed emphasis on fitness during the off-season, after reviving her partnership with Australian coach Darren Cahill.

“I worked a little bit more in the off-season; first time in my life away from home so I could be focused on what I had to do every day with no days off. I’m feeling much stronger than before,” Halep said.

“We work hard on my attitude and game and I’m now a better person and a better player because of [Darren].”

The opening break goes the way of the No. 4 seed for the 2-1 lead. The 🇷🇴 is the only player in the women's quarterfinals yet to drop a set.#AO2020 | #AusOpen pic.twitter.com/0el7MTDqKR

The fourth seed, one of the women’s game’s premier point constructors, began to run Kontaveit ragged as rallies grew longer and more physical – scuppering the Estonian’s preference for quick-fire exchanges.

Kontaveit found her one and only break point chance at 4-1 down, but a searing Halep forehand down-the-line foiled any hopes of a first-set comeback.

The former world No.1’s unrelenting ways continued into the second set, as Kontaveit grew hapless attempting net approaches, angles – anything – to try and stop the rot.

But luck was firmly on Halep’s side as she raced to a double-break lead, with the bruising blow coming in a 25-shot rally that ended on a dead-ball net-cord winner.

No luck at all for Anett Kontaveit. 😔

Back in the semi-finals for the first time since her marathon three-set loss to Caroline Wozniacki in the 2018 decider, Halep can return to the second Saturday with victory over Muguruza.

Although only striking 56 per cent of first serves, Muguruza won three in four of those points and was ruthless on return, only allowing Pavlyuchenkova three second-serve points for the match.

Her accomplishments are made more stunning, considering she lost her opening set of the championships to American Shelby Rogers 6-0 while battling a viral illness.

Integral to the Spaniard’s stunning resurgence is the return of former grand slam champion-turned-coach Conchita Martinez to her player’s box.

The pair partnered up to achieve ultimate glory on the grasscourts of Wimbledon in 2017, one year after Muguruza hoisted her maiden grand slam title in Paris.

“It’s like couples – we all want Brad Pitt and Jennifer Aniston to get back together, right?” Martinez told reporters on Tuesday about them reuniting.

Both Muguruza and Pavlyuchenkova looked dicey on serve under the devastatingly harsh midday Australian sun, trading early service breaks in the third and fourth games.

But it was the Russian, making her third Australian Open quarter-final berth in four years, who rediscovered the advantage courtesy of some stellar improvisation.

And similarly, Pavlyuchenkova relinquished the break in the following game as her serving went awry – a common theme when she found herself pressured by her opponent’s onslaught.

Serving to stay in the first set, the 32nd seed served three double faults – she would tally eight for the match – handing Muguruza the first set, who committed 16 unforced errors in the opener.

However, the Spaniard showed the temerity of a two-time major champion, tidying up her first-strike game and playing with greater confidence as the match wore on.

In similar scenes to the opening set, Pavlyuchenkova found the breakthrough but immediately imploded, and would only win another two games as Muguruza notched five breaks for the match.

The Spaniard’s third win over a seed in succession marks her deepest run at Melbourne Park, and next plays Halep for a chance to add a third major title to her cabinet.