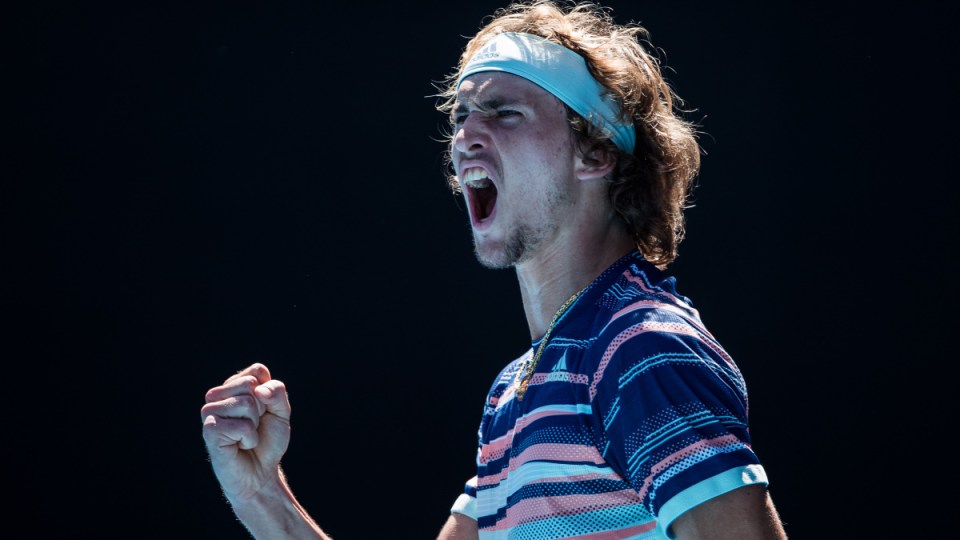 Allegations against Alexander Zverev of domestic abuse, which he denies, are being investigated. Photo: Getty

It’s counterintuitive to call a seventh seed’s triumph over the 15th an upset.

But when those two people are Germany’s Alexander Zverev – tennis’s “next big thing” who has a reputation as a damp squib at grand slams – and 2014 champion Stan Wawrinka, you may understand the rationale.

Even more so, when you consider Zverev faced serious questions over his credentials at the inaugural men-only ATP Cup only three weeks ago.

The world No.7 was second-rate.

His serve struggled to land, and so did his shots. In fact, he notched 31 double faults over the course of seven sets. Disastrous numbers, in anyone’s books.

He looked forlorn as he was wiped by peers Denis Shapovalov, Stefanos Tsitsipas and Alex de Minaur, with little fight.

He came to Melbourne despondent, and trained seven hours a day to try and shake off the yips.

The situation was so head-scratching that following his scrappy opening-round win against Marco Cecchinato, the 22-year-old pledged to donate his cheque to Australian bushfire relief, if he won the title.

Every single one of those 4.12 million Australian dollars.

Bold, but since it was seemingly out of possibility’s reach, it was an oath to be easily broken, right?

Well, Zverev finds himself within two victories of losing the biggest windfall of his career, weathering an early Swiss barrage to book a maiden grand slam semi-final berth 1-6 6-3 6-4 6-2.

Wawrinka came out swinging, as the 2014 champ wanton does. He clubbed seven winners, lost only three points on serve and had his younger counterpart on the ropes in 24 minutes.

It was dire and familiar territory. Speaking to John McEnroe post-match, Zverev said he was already mentally preparing to “talk to the press why I lost in straight sets“.

“I was not quite used to his ball because I always played at night, which was much colder and, all of a sudden, his ball was much quicker than the previous matches that I played,” he explained.

Then, the gas Wawrinka expended in his marathon escape against world No.4 Daniil Medvedev ran dry, and Zverev lifted.

He went 18 for 20 on the first delivery, and failed to lose a single service point in the second set. Wunderbar, indeed.

Zverev started countering the pace off his highly-touted opponent’s racquet, absorbing the blows and redirecting with interest.

He only hit two unforced errors to Wawrinka’s 11, quelling the bloodbath.

Dialled in, he started playing the game on his terms, throwing his 198-centimetre frame to all corners in desperation.

Wawrinka stood there resembling a winded boxer dreading another round as his preferred backhand wing – such a weapon on his best days – misfired.

The final three sets were wrapped up in under two hours, capped off with a daring serve-and-volley off a second serve. It was that kind of day.

“You guys can’t imagine what this means to me. I hope this will be the first of many,” Zverev told the Rod Laver Arena crowd.

Reminded of his serving woes before jetting into Melbourne Park, Zverev scoffed, joked that he forgot about them, before crediting the work he and his coach, Alexander Sr, drilled before this fortuitous fortnight.

“You know, this is a grand slam. This is where you’re supposed to play your best tennis,” he said.

“I am doing that … I [was] struggling not only with my serve, with my forehand, my backhand, my volleys, my drop shot, my slice, my return.”

That’s the thing. Tennis is a funny game that rewards at curious times.

And about that promise, if he so happens to cradle the Norman Brookes Challenge Cup come the conclusion of Sunday’s final.

“It was easy to say in the first round, right? I hope I can make it happen. I made the people of Australia a promise. I will keep that promise if it happens.”

Standing in the way of his final push towards fundraising success is world No.1 Rafael Nadal or Dominic Thiem. It’s an encounter with one guarantee – brutal physicality.

And it’s a tasty prospect for the surging Zverev.

“I will have a cold glass of Coke, sitting in my hotel room, with A/C watching them hopefully play for six hours and just hopefully they will get as tired as they can.“