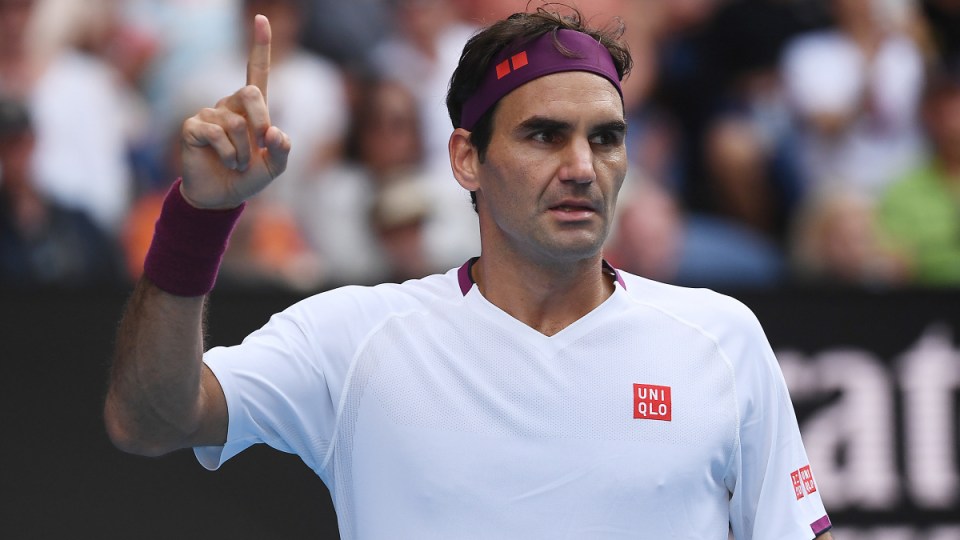 Roger Federer is likely to miss the Australian Open again as he continues his rehab after surgery. Photo: Getty

Never count a 20-time grand slam champion out, no matter how mortal he may appear.

There was some early brilliance, an injury timeout, a mid-match temper tantrum, allegations of ballkid sabotage, a bushel of match points, and yet, Roger Federer survived a major quarter-final scare to down American Tennys Sandgren in a five-set epic.

Federer struggled with his side-to-side movement, spraying 37 unforced errors before the miraculous turnaround was set in motion.

“You’ve got to get lucky sometimes, I tell you that. On those seven match points, you’re not under control. It might look that way, but I was just hoping maybe he wasn’t going to smash the winner.

“I think I got lucky today. With these lucky escapes, you don’t play with any expectations because you should be skiing in Switzerland. So you might as well make the most of it.”

The six-time Australian Open title winner looked uncharacteristically tepid as he lurched to a two-sets-to-one deficit while nursing the self-described groin complaint.

After Federer questioned the call, chair umpire Marijana Veljovic told the Swiss: “She’s 100 per cent sure … give me a break.”

Federer then called the trainer and was treated to a lengthy off-court injury timeout as his movement hampered his serve — averaging 173 km/h in the third set, compared to 180 and 183 in sets one and two.

Sandgren, the world No.100, powered on, securing the second and third sets in 75 minutes.

He then earned his first three match points on the Federer serve up 5-4 in the fourth set, which he squandered with groundstrokes fired into the net.

Sandgren encountered his own controversy during the ensuing tiebreak, as a ballkid bizarrely collided with his knee on the first changeover, prompting complaints of ‘knee bruising’.

Four additional chances to secure the upset of the championships came and went, as the one-time Australian Open quarter-finalist encountered jitters on his forehand and a resurgent Federer.

Resuming in the fifth set, Federer appeared to shake off his early injury woes, moving more freely as Sandgren grew irritable with off-court distractions and his own drained shot-making.

Sandgren dumping one final return into the netting on Federer’s first match point, quashing his bid to become the first American man to reach the semi-finals at Melbourne Park since Andy Roddick in 2009.

Federer had already rallied two points from defeat to avoid a five-set upset in the third round against Australia’s John Millman.

Federer maintains a 15-0 unbeaten record in Australian Open quarterfinals, and will be pitted against either defending champion Novak Djokovic or Canada’s Milos Raonic in his 46th grand slam semi-final.