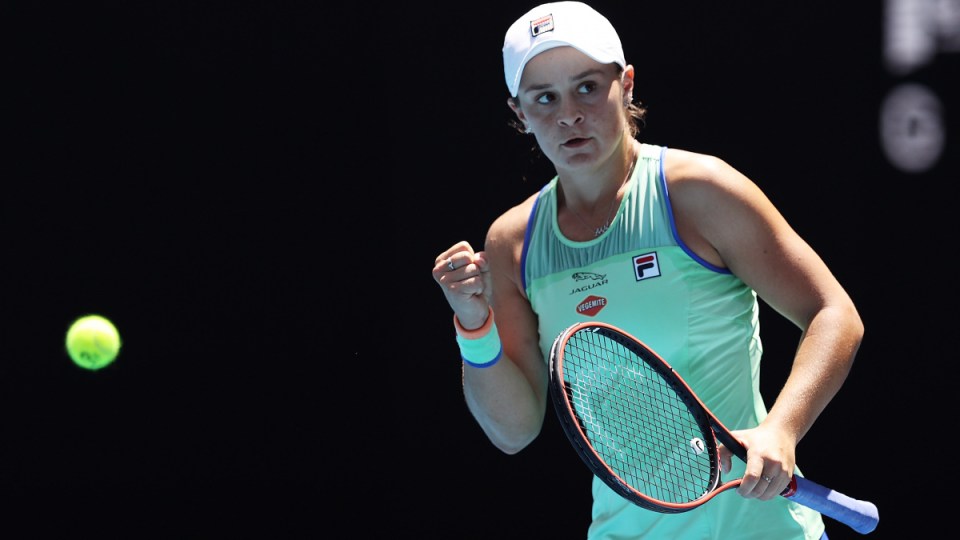 Australia's Ash Barty is through to the Australian Open semi-finals for the first time. Photo: Getty

The world No.1 has secured her first Australian Open semi-final singles berth by outlasting her 2019 conqueror Petra Kvitova 7-6(6) 6-2.

Barty’s quarter-final heroics marks the first time an Australian woman has reached the final four in Melbourne since Wendy Turnbull managed the feat in Kooyong in 1984.

The local hope weathered the Czech seventh seed’s powerful onslaught with some dialled-in counterpunching in a marathon opening set, before her supreme fitness allowed her to run riot in the second.

Barty brought up her first match point with an ace, and booked her ticket in the final four with another sublime serve.

Post-match, Barty goaded former doubles partner Casey Dellacqua to conduct the on-court interview: “She’s got no choice. Get your butt out here, girl.”

“[This tournament’s] been absolutely incredible. I knew I had to bring my absolute best against Petra and that first set was crucial,” Barty told Dellacqua and the Rod Laver Arena faithful.

“Petra in my eyes [is] the perfect competitor. She comes out here. She fights her absolute best. Does everything as best she possibly can … and I love playing against her.”

The seesawing nature of the first set was apparent from the opening game.

Barty immediately ran out to a 40-0 lead, before Kvitova pegged the game back to deuce, and notched up her maiden break point with some trademark strong ball-striking.

Weathering the initial storm with some neat defence, Barty then found herself on the back foot after an aggressive Kvitova return winner granted the Czech a break in the Australian’s next service game.

But the reigning French Open champion, wary of her opponent’s adeptness as a frontrunner, would not take it lying down, storming back to even the ledger the following game.

And so began a tense trading of service games, as Barty’s speedy wheels pitted against Kvitova’s pacy shots created an exhilarating tug of war.

Kvitova’s inability to convert break points – she would only go one from nine opportunities for the set – proved especially costly in the seventh game.

The Australian fought off five break point chances, and added to her highlight reel with a stunning rally in which she backed some desperate defence with a forehand screamer.

WHAT A SHOT FROM BARTY!

The #BartyParty fan club are on their feet.

Into the tiebreak, with Barty’s slicing and dicing ways continuing to stave off any threats from the other side of the court, Kvitova swung her way to an early advantage.

However, Barty produced some of her most remarkable tennis of the tournament to even things back up.

Returning a strong Kvitova serve on the stretch, the Australian proceeded over the 23-shot rally to dig out a number of low balls, recover smashes and chase down shots from side to side to eventually draw an error from Kvitova.

And the crowd was in absolute rapture as the players swapped ends.

Legs heavy and as points continued on serve, Kvitova eventually found herself with a set point on return.

However, a pair of strong serves and steadfast hitting from the baseline brought up Barty’s first chance to secure the opening set, which she converted.

And its impact was not lost on Kvitova, who appeared sluggish at the beginning of the second stanza, as Barty reaffirmed why she’s currently the world’s best player.

Barty found more opportunities to step inside the court, and gained the immediate ascendancy with two consecutive breaks of serve, as Kvitova struggled to hit through the court.

The seventh seed then scuppered the Australian’s raging momentum to secure a break back against the run of play for 4-2.

But that would be the last piece of resistance from last year’s finalist, as Barty raced away with the final two games of the match.

Now one win away from her second grand slam final, the only person standing in Barty’s way is America’s rising star Sofia Kenin.

“She’s a great ball striker who wants to be inside the court taking the ball either way. It’s about me getting my running shoes on [again and] bringing variety.”

If Barty wins through that encounter, she will become the first Australian to feature on the final weekend in singles since Lleyton Hewitt’s loss to Marat Safin in the tournament’s centennial in 2005.

Fourteenth seed Sofia Kenin thwarted the historic Australian Open run of one of the women’s tour’s flashiest players in Ons Jabeur to punch her ticket to the final four.

The 21-year-old American, whose game is trademarked by remarkable consistency, weathered a 10-minute service game in the second set to win the entertaining fourth-round clash 6-4 6-4.

The result continues her best-ever run in a grand slam, besting last year’s fourth-round appearance at the French Open.

“[That service game] was a tough moment, didn’t realise it was 10 minutes, she was playing well. It felt pretty long that game and after that I felt like I was gaining momentum and started playing better.”

Jabeur’s ability to improvise from all corners of the court shone from the first point, rocketing a forehand crosscourt winner on the run, as she endeavoured to become the first Arab – male or female – to make a grand slam semi-final.

Her turbulence proved costly, gifting Kenin an early break for 2-1, before recovering the deficit at 3-3.

With Kenin breaking back immediately, Jabeur’s game came to life, rewarding her with a handful of break point opportunities.

But Kenin’s healthy margin on her shots ensured she consolidated the advantage, sealed with a blistering backhand winner.

Both players began the next set swinging with greater liberty, conjuring rallies that drew gasps from the captivated crowd.

At 2-1, Jabeur improvised drop shot evaded Kenin’s reach at the net, while the American capped off a gripping backhand exchange with a forehand winner into open space at 3-2.

Kenin held her nerve to serve out a 10-minute game, and from there, the momentum distinctly shifted over to her side of the court, as Jabeur’s audacious play yielded more failure than success.

With two unforced errors bringing Jabeur’s tally to 36, Kenin sealed the 92-minute encounter on her first match point with an unreturnable wide serve.

Keen-eyed punters among the Rod Laver Arena crowd may have spotted the Moscow-born Kenin tuned in to the Kvitova-Barty encounter.

“I’d probably [be in the crowd]. It’s going to be a really exciting match. I’m in the semis. At this point anyone I’m playing will play really well.”

Former world No.1 Roger Federer is currently on the ropes in a nail-biting quarter-final against unseeded American Tennys Sandgren, after the pair traded the two opening sets 6-3 2-6.

Melbourne Park is something of a happy hunting ground for Sandgren, who dispatched world No.5 Dominic Thiem and Federer’s countryman, Stan Wawrinka, during his maiden quarter-final run in 2018.

The Tennessean bid farewell to top-seeded Italians Matteo Berrettini and Fabio Fognini during this year’s instalment.

The Swiss ace is appearing increasingly on the back foot as the match continues to wear on, as Sandgren forces the agenda with 19 winners to Federer’s 15.

The winner will face either reigning champion Novak Djokovic or big-serving Canadian Milos Raonic in the semi-finals.