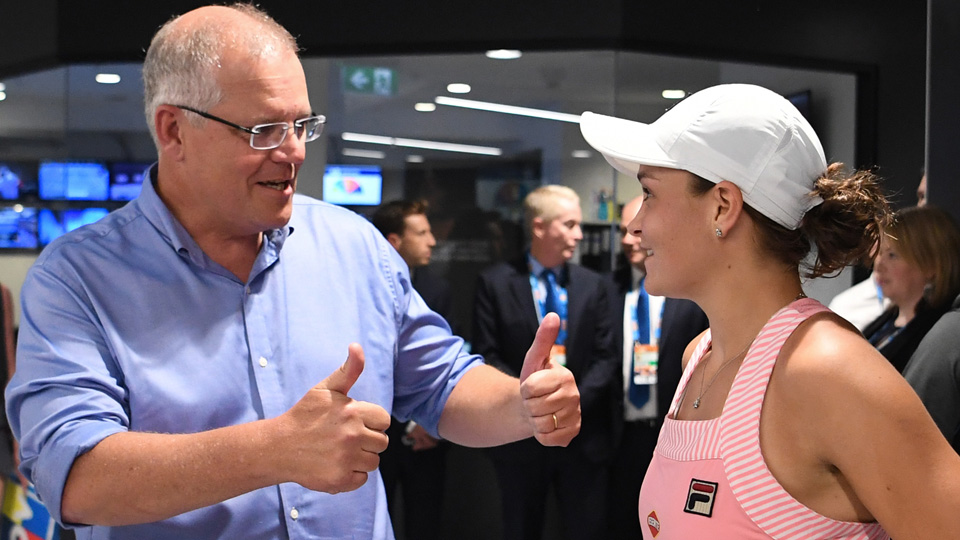 The Prime Minister gives his thumbs up to Ashleigh Barty and women's tennis. Photo: AAP

Prime Minister Scott Morrison backed up his day at the Australian Open on Sunday with a generous gift to the tune of $12 million.

Mr Morrison announced on Monday that the federal government would provide a large cash injection to increase the opportunities available for women and girls in tennis.

A Tennis Australia statement said the money would “go towards providing increased programs to disadvantaged and hard-to-reach communities throughout Australia in order to retain more girls and young women in tennis, open up more opportunities for talent development, while at the same time creating future female leaders in the sport”.

“As a father of two daughters, I want to help tackle the sorts of hurdles that can make it difficult for young girls to stick with their sport.

“That’s why this program will be so important for this and the next generation of female athletes.”

The funding will help provide 3000 girls with a talent development program, give 1000 women and girls the chance to be involved in leadership and mentoring sessions, and help create a 10 per cent increase in the number of female coaches.

Money will also be targeted at increasing the percentage of girls participating in competition play.

Ashleigh Barty is flying the flag for Australian women at the Open, with the Queenslander set to play the Czech Republic’s Petra Kvitova in a quarter-final on Tuesday evening.

Our wrap-up of the weird and wonderful on day eight at the Open starts with Alexander Zverev, who let his temper get the better of him when things stopped running smoothly.

The fourth seed was beaten in straight sets on Monday and was clearly unhappy with his efforts.

BAH GAWWWD HE'S BROKEN IN HALF! 💥

“It made me feel better. I was very angry, so I let my anger out,” he said in his post-match press conference.

Zverev’s feisty mood continued as he was asked: “Do you often smash your racquet?”

“You never watched my matches? You should watch my matches,” he told a reporter.

Serena Williams’ much-anticipated clash against Simona Halep had an amusing start as the American walked on to court as the words ‘the World’s No.1 player’ were read out over a PA system.

Of course, Williams is not the world’s No.1 player any more, with Halep – at least for now – holding onto that.

Williams quickly realised her error and made a U-turn as Halep eventually came onto court.

It's better with sound. pic.twitter.com/xAddacSswz

Now out of the Open, perhaps Zverev could take after Alex de Minaur and find another way to let off steam.

The 19-year-old Aussie, known as ‘The Demon’, showed off his best moves at a Melbourne nightspot after his Open exit.

“He’s up on the bar getting after it. Is that, like, a John Travolta thing?” Jim Courier asked after watching the clip on the Nine Network.

Karolina Pliskova made it nine wins on the trot in 2019 with a 6-3 6-1 thrashing of Garbine Muguruza on Monday.

Pliskova, who is seeded seventh in Melbourne, entered the tournament off the back of a title at the Brisbane International.

But a 10th win in a row will not be easy with 23-time grand slam winner Serena Williams waiting in the quarter-finals.

At least she is maintaining her cool before the pressure-packed game.