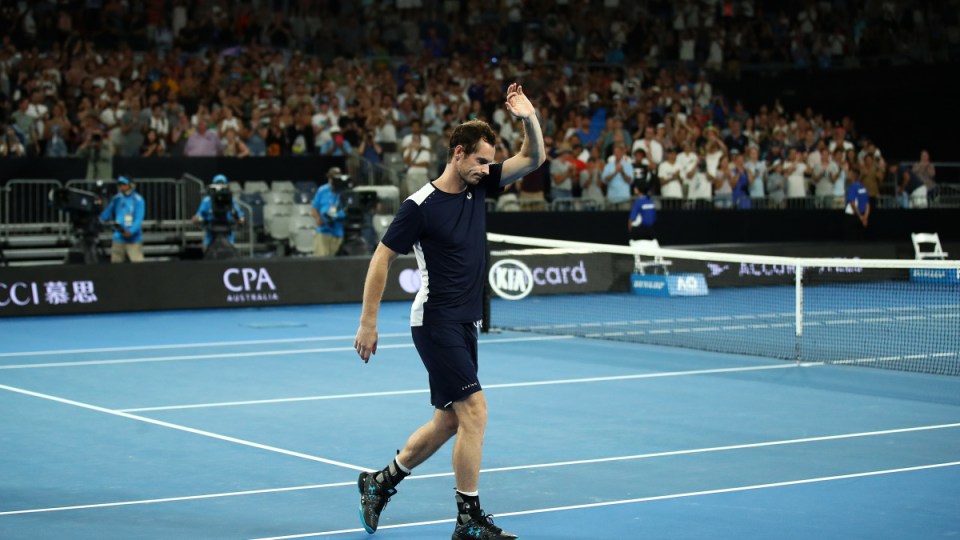 Andy Murray of Great Britain after his first round loss to Roberto Bautista Agut. Photo: Getty

In typical Andy Murray fashion, he gave it everything he had.

Just last week, the 32-year-old said the pain from a persistent injury was “too much” and that he had been “struggling for a long time”. That he was just hoping to make it through to Wimbledon. That there was a chance the 2019 edition of the Australian Open would be his last tournament of his career.

If that is indeed the case, Murray’s exit from tennis looked like being a swift one, Bautista Agut winning the first two sets on Melbourne Arena against a clearly wounded rival on Monday evening.

But urged on by a vociferous pro-Murray crowd, the Scotsman found something in the tank.

He dug deep, winning the next two sets in tiebreaks and producing a handful of strokes that gave us all a glimpse, perhaps for one final time, of his undeniable class.

This was no ordinary first round grand slam encounter and Murray’s emotions were on full display throughout, never more evident than when, after celebrating one of his tiebreak successes on court, he continued to do so when sitting down as the players took a well-earned breather.

Murray – shown a video full of tributes from top men’s and women’s players while he was on court – said in his post-match press conference that he would “probably decide in the next week or so” if he was going to get major hip surgery, something he previously described as “having my hip resurfaced”.

“If I go ahead with the operation [and] I don’t recover well from it, then I don’t play again,” he told reporters.

“I’m aware of that. That is the decision that I have to make.

“I can’t walk properly at all just now … I would like my daughters to come and watch me play a tennis match, hopefully understand what’s happening before I finish.

“But I’m aware that that probably isn’t going to happen now. I’m a bit sad about that.”

Despite losing five men’s singles finals at Melbourne Park, Murray said the place would always remain special to him.

“I have genuinely loved playing here,” he added.

“They support really well, have created some amazing atmospheres for me … there’s a lot of Brits that live here, too.

“Tonight was the most special match that I played [here], even though it was the first round of the tournament and I lost. I certainly won’t forget tonight.”

Introducing Passing Shots, our daily round-up of the weird and wonderful at the Open.

The tallest grand slam match … ever

Americans Reilly Opelka (211cm) and John Isner (208cm) made history on Monday in the tallest grand slam match of all time.

Isner – seeded ninth and ranked 87 places higher than Opelka – smashed 47 aces of his own.

Rafael Nadal saw the funny side of a journalist falling asleep in his post-match press conference.

Nothing gets past @RafaelNadal #AusOpen pic.twitter.com/PebIxmYg4t

Not that Boulter remembered the updated regulations.

The Brit celebrated once taking a 7-4 lead in the tiebreak, forgetting that third set women’s singles tiebreaks at grand slams at the Australian Open are now first to 10.

She wilted from there, losing the next two points before regaining her composure and winning.

“I was in the moment and I kind of forgot that it was first to 10. I’m happy I could dig deep and get through it in the end,” she told reporters afterwards.