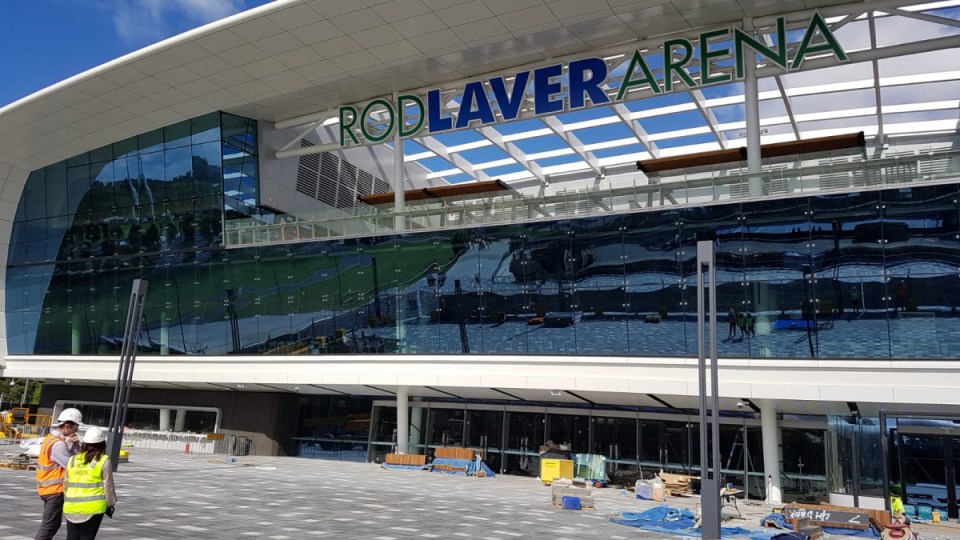 Victoria has spent, or will spend, almost $1 billion to upgrade the complex. Photo: Melbourne Park

Rod Laver is looking different at this summer’s Australian Open.

His old gateway is gone, replaced by a futuristic new front entrance to his arena: A stunning four-storey gateway looking across the Melbourne Park tennis complex, and giving the world’s top players a luxurious home to unwind in between matches.

It’s a dramatic change. Rod’s statue above Swan Street used to look down on the thousands of people climbing up the stairs. But for now, Rod finds himself looking down on a new loading bay for trucks to serve this vast complex, which is getting bigger and busier as the Australian Open crowds swell, and more concerts rock the rafters.

Rod’s statue too will move to the new entrance in coming months, after they’ve covered the loading bay and built a pathway up from Swan Street. It’s the next part of the endless redevelopment of Melbourne Park, as its owner, the Victorian government, seeks to lock in Australia’s biggest international sporting event.

Since 2010, Victoria has spent, or announced plans to spend, almost $1 billion of public money to upgrade a complex that was already arguably the best in the world.

Stage One upgraded Margaret Court Arena in beautiful style, and much else. Stage Two has seen the award-winning Tanderrum footbridge from the city, the Tennis HQ office/media/functions building, and now Rod’s grand new entrance and a major renovation of his arena.

The new entrance will overlook the key features of Stage Three: A new 5000-seat show court, on a raised platform which will also house two minor courts, a far larger function and media centre, and two public terraces between the Rocket’s arena and its deputy, formerly known as Hisense Arena, but for now, just as Melbourne Arena.

That alone will cost $272 million, mostly from Victorian taxpayers. Given all the other pressures on the Andrews government’s finances, the commitment underlines its determination to keep the Australian Open in Melbourne long after the current contract expires in 2036.

It’s telling that potential challengers from Sydney, let alone Shanghai,  don’t even think about it. Melbourne Park, now valued at $2 billion and growing every year, will remain the world’s state-of-the-art tennis complex.

What they’ve been doing to keep it that way

Brian Morris is chief executive of the Melbourne and Olympic Parks Trust, the government body that manages the park. Like his counterpart at Tennis Australia, Craig Tiley, he’s a South African emigré, although his background is in entertainment, not tennis. That’s fitting, because big as the Open is, it’s tours by artists like Pink that make the centre profitable.

We start at Rod’s new front door. It stands at a 90-degree angle to the old front door, on the heights looking across the eastern half of the complex towards the arena formerly known as Hisense.

It’s spectacular, and it’s a lot more than a doorway. It stands four storeys high, housing a swish new “Player Pod”: lounges, ice baths, new restaurant, changing rooms, treatment rooms and gym and a rest room upstairs. And the very top is a super rooftop terrace, with views over the complex.

Why move the front door from Swan Street? Clearly there are several reasons, but Mr Morris says it’s about “reorienting the complex towards the city” to make it “more of an asset to Melbourne”.

Most people now arrive at Melbourne Park on the north side, by tram from the city, he says. Swan Street is now a minor entrance, and it no longer makes sense for it to be the centre’s main doorway.

The arena itself is halfway through a major renovation, with big changes to the roof, the seats, the doorways, and to its capacity to mount sound and light equipment.

The retractable roof was one of the first at any sporting venue in the world, and “a remarkable engineering feat for the time”, Mr Morris says. But it took 25 minutes to fully open or close it. That entire mechanism has been replaced with a new one that can do the job in five minutes.

The original moulded plastic seats in the lower half of the arena have been replaced with more comfortable, slightly wider, padded seats, with armrests and cupholders – because the public is itself, slightly wider than it was 30 years ago. Some aisles have been sacrificed to make room.

The old stairs leading from the concourse to the court have been replaced with a level surface offering wheelchair-friendly entry. There are more and more spectators arriving in wheelchairs but, until now, wheelchairs had to come up in a special lift, resulting in long queues.

The concourses around the arena, which during the tennis become choked with human traffic, have been widened by two metres, partly to slip in more food stalls and bars, partly to allow an improved pedestrian flow.

There has also been a massive ongoing redesign of vast areas that the public never sees, in the two storeys below the concourse level. During the Open, as many as 6000 people work in these underground layers, in kitchens, stacking, storing, loading and unloading, and performing services of all kinds.

The outside courts too have been upgraded. Their new lights are three times as powerful as the old ones, improving the environment for night tennis. Hawk-Eye will be available on all 16 playing courts, with improved TV screens which can also show the action from Rod Laver Arena.

Work on Stage Two will be completed later this year, when the top half of Rod’s arena will get its new seats. The function centre will then be demolished, and work will move on into the $272 million Stage Three of this massive renovation.

The key elements of the next stage are:

There will be some changes to the tennis too. For years, players have been officially required to take no longer than 25 seconds between points, but no one has enforced the rule – particularly against the two worst offenders, Rafael Nadal and Novak Djokovic. This year marks the arrival of the shot clock to keep them honest.

For Nadal, a man of extreme habit, famous for the lengthy routine he goes through before serving, this could be a traumatic experience.

After the debacle Melbourne’s heatwave caused last year, when players visibly wilted on court, and matches became tests of survival, this Open will have a new heat policy based on measuring four atmospheric variables – the temperature, humidity, wind speed and radiant heat – to create an index of heat stress from one to five.

If the index reaches four, players will be allowed a 10-minute break after the second set of a women’s singles match, and after the third set of the men’s match.

If the index hits five, the tournament referee can order the roof closed, or on outside courts, order play to stop at the end of a set, and postpone new matches from starting until the heat fades.

It sounds more scientific. One hopes it will make a difference, both in the interests of the players’ welfare – and of keeping the Australian Open the state of the art.