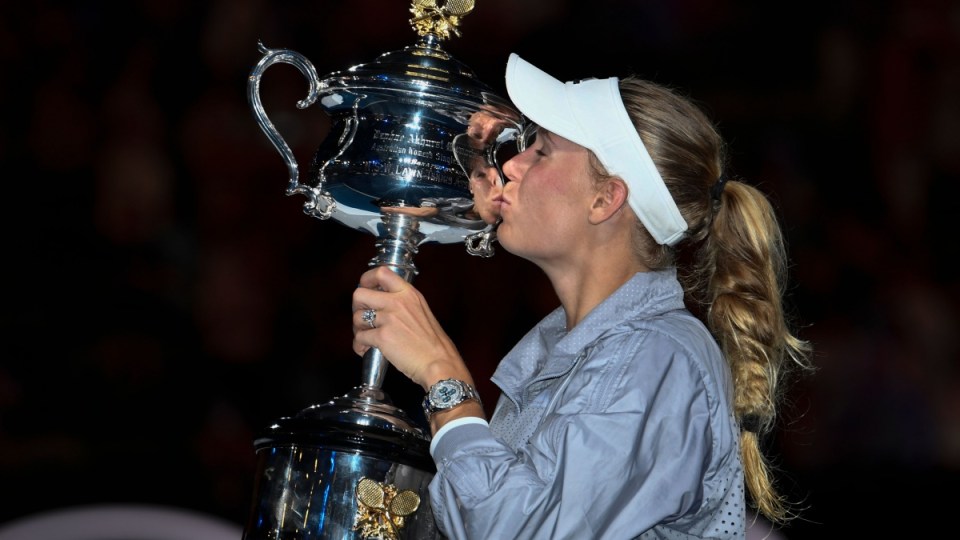 Wozniacki will return to the top of the world rankings. Photo: Getty

We were due a classic.

Consecutive nights of dud semi-finals in the men’s singles left fans at Melbourne Park frustrated, but Saturday evening’s thriller more than made up for it.

In a see-sawing contest between two players yet to win a Grand Slam, Denmark’s Caroline Wozniacki edged it, defeating top seed Simona Halep 7-6 (7-2) 3-6 6-4 in two hours and 49 minutes to be crowned Australian Open champion for 2018.

Wozniacki, who held the world No.1 ranking for 67 weeks between October 2010 and January 2012, had been dogged by her failure to win a Grand Slam. When she slipped to 74th in the rankings less than 18 months ago it looked like her dream would never come to fruition.

But the 27-year-old’s eventual breakthrough at Grand Slam level, which triggered a flood of tears after the final point, was richly deserved after she held her nerve in a 72-minute third set that swung wildly with seven breaks.

Indeed, trailing 3-4 in the decider and with Halep still to serve, Wozniacki was staring defeat in the face.

She took an injury timeout to address a troublesome knee and came out breathing fire, winning the last three games to seal victory in a match described by television commentator Sam Smith as “one of the great finals”.

Halep had problems of her own, telling reporters at her post-match press conference that she was feeling dizzy and suffering headaches throughout a defeat that will spark talk about her own failure to win a Grand Slam.

The Romanian has now lost three Slam finals – one of them a particularly bad capitulation at last year’s French Open.

Halep, who also cried after the match, said it was a “little bit tough” to sit on the sidelines for three minutes while Wozniacki was treated in the final set but “the rule is the rule” and she would not complain.

Wozniacki, who hugged the Daphne Akhurst Memorial Trophy as she spoke during the ceremony, said: “I’ve dreamed of this moment for so many years and to be here today is a dream come true.

“My voice is shaking. I never cry but today is a very emotional moment.”

She later told the Seven Network: “It was a crazy match today. I didn’t know who was going to win. At no point did I feel comfortable.

Wozniacki, who saved two match points against Jana Fett in the Open’s second round, then told reporters: “I think that’s one of the most positive things about all of this … I’m never going to get that question [about not winning a Grand Slam] again.”

The Dane started in scintillating fashion, racing to a 3-0 lead, but Halep came good on her serve before breaking when Wozniacki was serving for the opener at 5-3.

A tiebreak eventually followed and although Wozniacki won it comfortably, the series of long and exciting rallies had fans eagerly anticipating the second set.

The players didn’t let them down, either, with an 11-minute game, which saw Halep save four break points to eventually hold and take a 2-1 lead.

Halep – who called for the trainer at 3-2 with the temperature, at 8.53pm, still sitting at a steamy 29.9C – kicked on from there, breaking to go 5-3 up with a typically powerful forehand before she saved three break points of her own to level it up at one set apiece.

As she did in the first set, Wozniacki started brightly, leading 2-0 before another marathon game. This one lasted 11 minutes and 53 seconds, was chock-full of outstanding rallies, and went Halep’s way.

Wozniacki broke straight back to lead 3-1, but just minutes later she trailed 4-3 in what was becoming a truly gripping final set.

She later admitted thinking “it looks like it may not be my day” but she didn’t let on, showing an abundance of grit and desire in the penultimate point of the match.

Halep should have won that point, with Wozniacki scampering from one side of the court to the other just to keep the ball in play before she produced a stunning cross-court backhand that caught her opponent on the hop and led to a smashed winner.

Wozniacki threw her racquet in the air, collapsed and burst into tears.

The hoodoo was over.