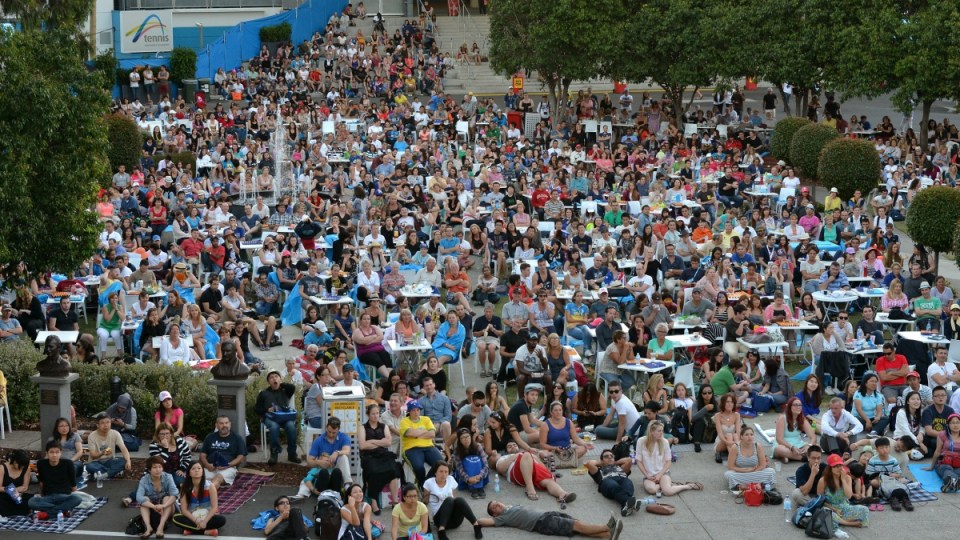 When it comes to the ‘sport event experience’, the Australian Open has stamped itself as the best in the business.

The first Grand Slam of the year is undoubtedly a brilliant sporting event, but it’s now become more than that.

It’s now a festival of sport – and other things, too.

If watching tennis all day is not your thing, there have been plenty of other things to keep tennis fans entertained at Melbourne Park this year.

The ‘AO Ballpark’ is an on-site theme park built especially for young tennis fans, or you could have even ventured to the ‘AO Live Stage’ at Birrarung Marr, which plays host to 15 consecutive days of music.

As Australian tennis great, Pat Cash, put it: “To me, it’s always felt like it’s a festival that happens to have a tennis tournament going on at the same time.”

Of course, this didn’t happen by accident.

Rather, it’s been a very deliberate strategy by event organisers to ensure they get as many people to the event as possible.

And it has definitely worked.

Tennis’ success with the Australian Open – more than 750,000 fans were expected through the turnstiles over the fortnight – has sent a message to other sports.

That message? The actual sport, no matter how good it is, is simply no longer enough.

The ‘event experience’, especially for longer sports such as Grand Slam Tennis and even Test cricket, is now a vital selling point.

Since the Australian Open left Kooyong for Flinders Park in 1988, the transformation of the event has been nothing short of extraordinary.

The last tournament at Kooyong attracted a tick over 140,000 spectators and the first year at Melbourne Park saw almost 245,000 fans attend.

A lot of that growth is a direct result of the product.

The Melbourne Park facility is one of the best in the world, with three main courts, each with a retractable roof.

It’s now marketed as ‘the Grand Slam of Asia/Pacific’. The sponsors have jumped on board, which has driven a significant increase in prize money.

The players love coming which, before the move to Melbourne Park in in 1988, was not always the case.

And so do the fans.

The middle Saturday of the event, for example, is ‘Coopers Saturday’.

You can bet your bottom dollar that more than a few will be there to sample the sponsor’s product, catch up with friends and listen to the music. For them, the tennis will be a sideshow.

Tennis Australia doesn’t necessarily care why you’re there. They would rather you be in the beer garden at Melbourne Park and listening to a band, than at the MCG watching the Big Bash.

This has long been the mantra of other sports, too.

There’s been more than a few revellers who have been to the Spring Carnival of racing without laying an eye on a horse.

And other sports are following suit.

Cricket Australia, for example, is starting to punctuate their matches with various entertainments for their fans to enjoy.

However, it’s something cricket – especially non-Ashes Tests and One Day Internationals – in every city, could do more of.

Regardless of who Australia’s opponent is, the key is to make the ‘event’ unmissable.

Give fans extra reasons to attend, enticing them by showing them a good time both inside the stadium and out.

Make no mistake, the actual on-court action for premium sport events such as the Australian Open is still the main part of the show, but perhaps it’s now the ‘whole show’ that makes a sporting event truly great.

The Australian Open organisers recognised that long ago and have been reaping the rewards ever since.

The purists don’t like it. They argue that if you’re not there for the sport, then don’t bother going. However, the reality now is that in the business of sport more fans means more money.

And without money the game suffers. Or worse still, it doesn’t survive.

Australian Open 2018: How the event became so popular