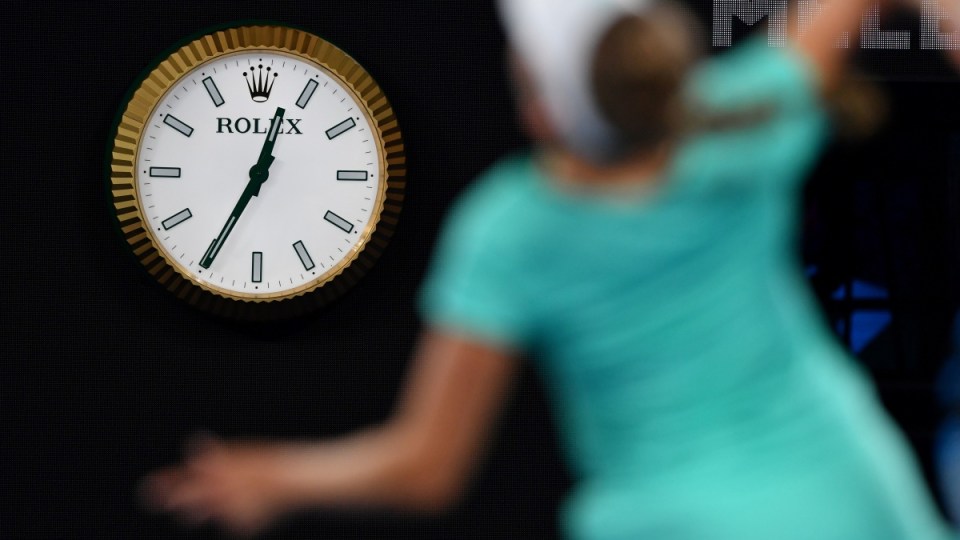 The clock frequently went past the stroke of midnight for female players at this year's Open. Photo: Getty

If you play, coach or enjoy watching women’s tennis, that apology is well and truly overdue.

The times of 10.55pm, 11.30pm and 11.59pm might look like a timetable for trains leaving Flinders Street Station later tonight, but they’re not.

They are start times for women’s singles matches at this year’s Australian Open.

On seven of the first nine nights at Melbourne Park this year, women were scheduled to play after the men.

The result? A series of post-midnight finishes as many of the world’s biggest stars played in front of near-deserted arenas.

The players deserve better, and you can take the case of Karolina Pliskova as an example.

The world No.6 was on court until just after 1.30am in a three-set win over Barbora Strycova on Monday evening.

That meant Pliskova did not get to bed until 7am the morning after her match started, hardly ideal preparation for a clash the very next day against top seed Simona Halep.

“I think just these late night matches they should cancel,” she said afterwards.

Sophoulis, part of the famous Bryan Brothers’ coaching team at this year’s Open and a former member of Halep and Sibine Lisicki’s set-up, told The New Daily: “Most players will ride a bike for anywhere between five to 15 minutes to loosen the legs after a match.

“They will get some food in as they are riding the bike to start the recovery. Then they will go and do their media commitments before stretching for 20 to 30 minutes.

“Then an ice bath for 10 or 20 minutes might follow, and then they will go for a massage … it can take anywhere from one hour to two to three hours.

“[Late matches] are quite challenging in terms of preparation [if there’s a next match]. Playing late at night makes a massive change to a player’s routine … it is difficult.

“It’s not a great thing but it’s normal and we, as coaches and players, don’t worry too much about it.”

No athlete worth their salt skimps on recovery and, as a result, there’s plenty of tired faces around Melbourne Park in the second week of a Grand Slam.

Aussie Daria Gavrilova made Open history this year when her second-round match against Elise Mertens started at 11.59pm – the latest ever.

She said afterwards such a late start is “just annoying”, but that she was happy enough to put up with it given she was playing on Rod Laver Arena.

Why is this happening?

It hasn’t happened much this year, though, with media expert Dr Sam Duncan suggesting that host broadcaster Seven played a key role.

“It’s simply a matter of ratings,” he told The New Daily.

“That’s not to say women’s tennis doesn’t rate well but the big names in tennis are men, particularly without Serena Williams at this year’s Open.

“Seven definitely have a big say … they want the biggest stars playing in prime time.

“They don’t have the only say. Tennis is an international sport with lots of international broadcasters, but Seven want the best-known talent in prime time.”

Dr Duncan also suggested that the surge in popularity of the Big Bash League, with the domestic Twenty20 competition screened almost nightly on Network Ten through the summer, had forced Seven’s hand.

“Last year was a little bit of a shock to Channel Seven, who are so used to winning the ratings easily come tennis time,” he said.

“They were challenged last year and didn’t win every night.

Sophoulis agreed, saying that the “best matches are put on in prime time”, but when contacted by The New Daily, Seven said scheduling was down to Tennis Australia.

Tennis Australia did not respond to The New Daily’s questions on the matter.

Australian Open 2018: An apology to women’s tennis players and fans is overdue