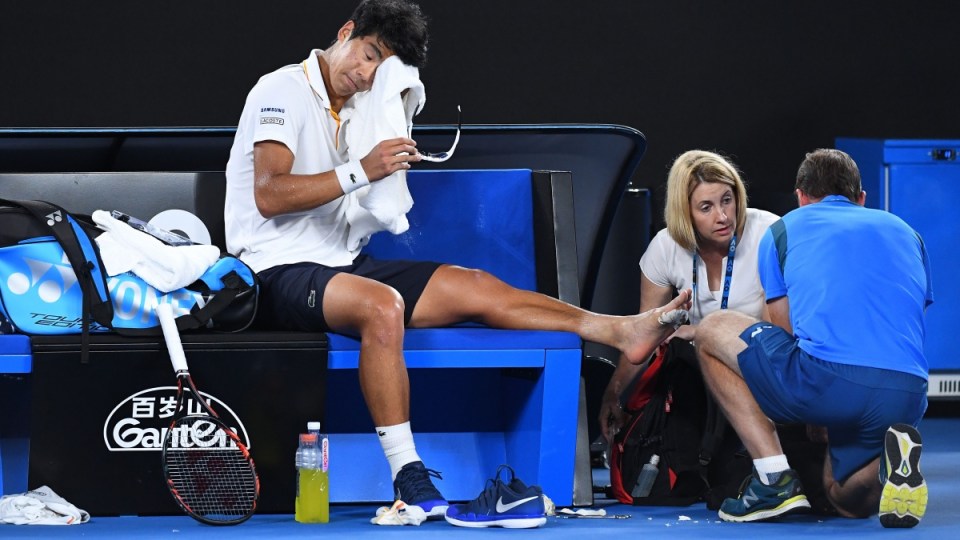 In hindsight, they should have seen it coming.

Hyeon Chung, at 21, could not keep up with Roger Federer, 15 years his senior, and had just taken a medical timeout so blisters on his left foot could be assessed.

But the near 15,000-strong crowd at Rod Laver Arena were still stunned when Chung abruptly called it quits just 62 minutes into his semi-final clash with the Swiss maestro at Melbourne Park on Friday evening.

There were even a few boos as the likeable Chung fetched his gear, but by the time he slung his bag over his shoulder and trudged out of the stadium, those jeers turned into a standing ovation.

Chung had delivered plenty at this year’s Australian Open, including big-time upsets over six-time winner Novak Djokovic and world No.4 Alexander Zverev, but struggling with injury, on this occasion, he had nothing left to give.

And Federer, who led 6-1 5-2, was the beneficiary, leaving just Croatian Marin Cilic in the way of what would be a 20th grand slam title.

As it turned out, Chung’s injury was much “worse than regular blisters”, his agent Stuart Duguid said.

“They tried injections to see if it numbed the pain. It didn’t work.”

For someone who was “really hurt” and couldn’t “walk no more”, Chung was very upbeat in his press conference, happy with his tournament.

Federer was more business-like and in the mood of a man who still has one big match left to win.

“I just have to play a good match [against Cilic],” he said.

“I just hope I’m going to have a good start to the match. I hope I can mix up my game. I hope I can start serving well from the get-go … I can read his serve and all these things.

“I think I’ve done everything pretty well, you know … things must be all right if I’m in this stage right now not having dropped a set and in the finals.”

Federer said on Wednesday evening that he knew little about Chung’s game, but that had clearly changed by Friday as he won the toss and elected to return.

It is not a move that Federer uses often, but Chung doesn’t win many ‘free’ points on serve and his second serves are particularly gettable.

Federer seized on that, breaking in the very first game of the match.

Chung then wasted a chance to break straight back, thrashing a forehand wide before a pair of Federer winners saw him take a 2-0 lead.

Chung was well off his level, shown when he was broken in the fifth game after four errors in five points, and Federer did not let up, even if he needed five set points to take the opener.

“This is pressure that he has never felt before. Federer is just bullying Chung in this opening set,” Todd Woodbridge said on the Seven Network.

Jim Courier added: “He [Chung] is like a fish being baited and just being hooked. That doesn’t feel very good.”

It doesn’t, and nor did Chung’s feet.

He battled on through the second set, before, 1-4 down, he took a lengthy timeout that saw Federer unable to remain still.

He stood and pondered, hands on his hips, before skipping and playing some shadow forehands.

It was just 53 minutes into a Grand Slam semi-final and Federer, like a kid, just wanted to play.

He will get another chance on Sunday.