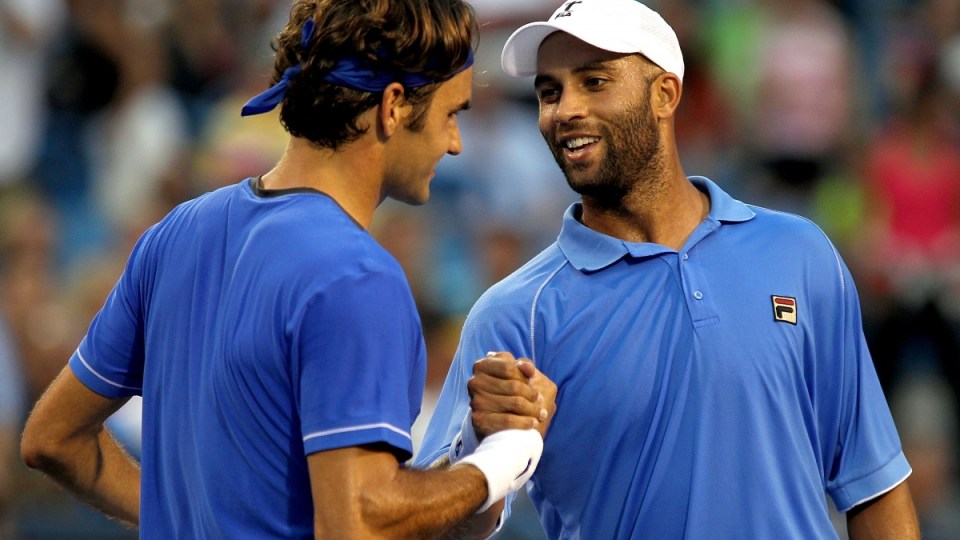 Roger Federer and James Blake have plenty of respect for each other. Photo: Getty

When Roger Federer revealed that he had written to Rafael Nadal only hours after the Spaniard withdrew from the Australian Open due to injury on Tuesday, many tennis fans were left feeling all warm and fuzzy.

The pair have, of course, been huge rivals throughout their career, with many of Nadal’s crowning moments coming against Federer, and vice versa.

They are friends off court, though, and it later emerged that Federer has form for going above and beyond the call of duty with injured players.

Take American James Blake, for example. Blake, who reached a career high singles ranking of world No.4, broke his neck after a training accident in Rome in 2004.

Quoting a tweet mentioning Federer’s note to Nadal, Blake, who returned to the tour after his injury, posted: “I got one note from a player in the hospital when I broke my neck.

“@rogerfederer – Tennis is lucky to have such an amazing ambassador for the game.”

He added: “It was a handwritten note from the #1 player in the world.

“Just something many players wouldn’t take time out of their day to do for a fellow competitor in the middle of a tournament.”

And when someone responded: “So the real @rogerfederer is somehow even more remarkable than the one we see on the tennis court”, Blake responded with: “Tough to believe, but yes.”

It emerged on Thursday that world No.42 Alize Cornet missed three drug tests in a 12-month period and is now the subject of an investigation.

A ban could be forthcoming and Cornet, who lost in the third round at the Open, was allegedly charged with the violation on January 11, before the tournament started.

She attempted to clarify her situation, posting a statement on Twitter that said she had “valuable reasons” for missing the tests.

The ITF disagreed, releasing a statement of its own on Thursday afternoon.

It read: “The Tennis Anti Doping Programme [TADP] points out that, contrary to the implication in Ms Cornet’s statement that the ‘valuable reasons’ for her unavailability for testing at her declared whereabouts went unheard, the process set out in the International Standard for Testing and Investigations for the management of Whereabouts Failures, which includes the right for the player to request an independent assessment of whether the requirements for such failures were met, was followed in all three instances.”

The result that changed Chung’s career

Military service in South Korea is compulsory and runs for 21 months.

One way to be exempt? Win a significant international sporting competition.

That was the task facing Hyeon Chung and Yong-kyu Lim at the men’s doubles in the 2014 Asian Games, as discovered by The New York Times’ Christopher Clarey.

Chung told Clarey: “We saved like four match points in the semi-finals. If I lose that match, maybe I am not here now. I would have go to the army.”

Chung and Lim made it to the final and won, and even though the former did do some military service, it was not for long, allowing him to continue on with his tennis career – a decision that looks pretty good given his run to the Australian Open semi-finals.

Earlier in the tournament, Nick Kyrgios was demanding his box stand up and be more animated.

The same can’t be said for Caroline Wozniacki, who just wanted some peace and quiet from her player’s box in her semi-final win over Elise Mertens.

🇩🇰 @CaroWozniacki tells her players box to calm down… usually it's the other way around!

All eyes will be on Rod Laver Arena in prime time as Federer meets Chung in a blockbuster match-up.

This is the last edition of The Daily Deuce from the 2018 Australian Open. We hope you have enjoyed reading. Catch you next year!