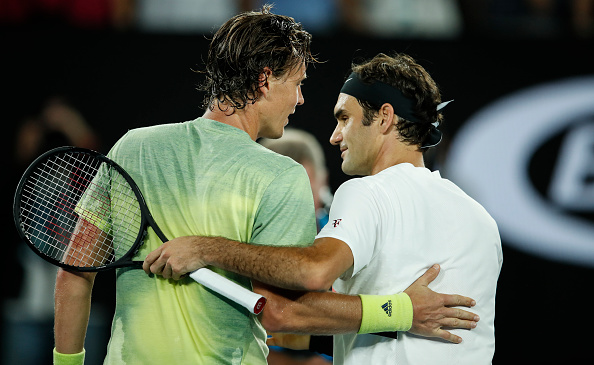 For 11 minutes, Roger Federer was error-prone and beatable.

They are words rarely associated with the Swiss maestro, but eight unforced errors and a double fault in three games are not either.

For his opponent Tomas Berdych, who led 3-0 and 5-2 in the first set, this was his opportunity, a chance to end an eight-match losing streak against the man who had knocked him out of the last two Australian Opens.

Two set points slipped through the Czech’s hands, though, as a confrontation with the umpire provided Federer the spark he so desperately needed.

Federer disagreed with a decision to call Berdych’s serve as ‘in’, so decided to challenge, only to be informed that HawkEye was not working, but that the original call was correct.

“Are you comfortable with this?” he asked umpire Fergus Murphy in a lengthy exchange of views from the usually ice-cool Federer.

Berdych saved the next break point as well, but Federer, now stirred up, eventually claimed the break to level the first set at 5-5.

He never looked back, going on to win Wednesday’s quarter-final 7-6 (7-1) 6-3 6-4 in just two hours and 14 minutes, and later admitted that his confrontation with Murphy was largely a bid to fire himself up.

“I had to get a bit lucky, a bit angry, a bit frustrated, maybe at the umpire,” Federer said afterwards.

“I actually thought the call was good … I was just getting a bit frustrated and antsy.

“I’m happy I got out of the first set. It ended up being the key of the match.

“It could have gone either way. He deserved it … I stole it.”

Federer’s theft was particularly difficult for Berdych to take, given his poor head-to-head record against the 19-time grand slam champion.

When asked about it by The New Daily, he said: “It’s not the best feeling.

“It was a good start. I had good chances, a couple [of] set points.

“I think he just get more confident after he saved the first set. Then it was very difficult with him again.

“After having been basically a whole set down, it gives you a lot of boost [to win one] … I think it was just the deciding thing.

“Winning a first set would be [a] completely different story.”

For Federer and Berdych, the story has been similar for some time.

Federer, who was breathtaking in the tiebreak that ended the opener, carried on where he left off in the second set.

A pair of winners on that glorious backhand of his saw Federer break in the eighth game to take a 5-3 lead and an easy hold followed.

If any point summed up Federer’s last two sets, it was his winner that saw him level it up at 1-1 in the third.

A powerful forehand from Berdych sent the Swiss scrambling and he had to be at full stretch just to make the shot.

Not only did he retrieve it, he thrashed it over the net for a cross-court winner.

This was Federer’s night, and even though he was broken at one stage, he simply got it straight back en route to an imperious victory.

Halep and Kerber do it easy

Top seed Simona Halep was rarely troubled in a 6-3 6-2 thrashing of Karolina Pliskova in her quarter-final on Wednesday.

Pliskova hit 28 unforced errors in defeat, with Halep to face former world No.1 Kerber in the last four.