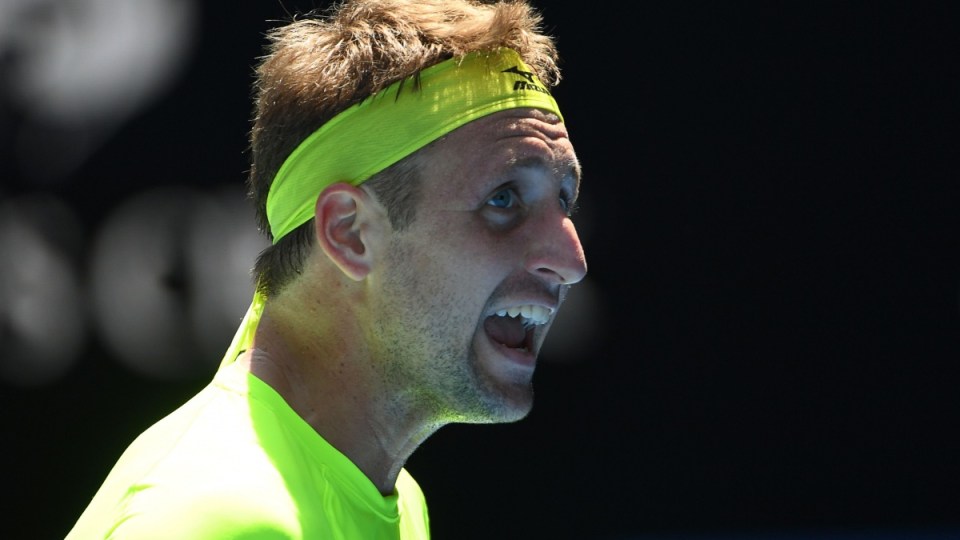 Tennys Sandgren was furious with the press. Photo: Getty

American Tennys Sandgren took aim at the media in an extraordinary press conference following his Australian Open exit on Wednesday.

The world No.97 entered January without a grand slam win but posted four in Melbourne – including the scalps of top-10 players Stanislas Wawrinka and Dominic Thiem – before bowing out in the quarter-finals to Hyeon Chung in straight sets.

As a result of the increased spotlight, Sandgren’s social media activity became big news, and after he passionately rejected accusations he supported the alt-right movement, he deleted thousands of posts he made on Twitter.

He then entered his press conference to read a prepared statement off his phone that was dripping in anger.

"With a handful of follows and some likes on Twitter, my fate has been sealed in your minds."

“You seek to put people in these little boxes so that you can order the world in your already assumed preconceived ideas,” Sandgren said.

“You strip away any individuality for the sake of demonising by way of the collective.

“With a handful of follows and some likes on Twitter, my fate has been sealed in your minds.

“To write an edgy story, to create sensationalist coverage, there are a few lengths you wouldn’t go to to mark me as the man you desperately want me to be.

“You would rather perpetuate propaganda machines instead of researching information from a host of angles and perspectives while being willing to learn, change and grow.

“You dehumanise with pen and paper and turn neighbour against neighbour. In so doing, you may actually find you’re hastening the hell you wish to avoid, the hell we all wish to avoid.”

You can hear the rest of Sandgren’s statement in the video above.

He then said he would only answer questions about his match, but later veered off course and said that the increased attention on him would see him “go home and enjoy time with my family, turn off my phone, you know, just really reflect on the last two weeks”.

Women’s tennis legend Serena Williams seemingly weighed in to the Sandgren debate too, posting “Turns channel” on Twitter just before his match started.

Social media sleuths came across two now-deleted posts Sandgren had made on Twitter about Williams in the past.

First, in January 2013, he commented that it was “always a good day when Serena goes down”, referencing her quarter-final defeat to Sloane Stephens at the Australian Open.

And in 2015, Sandgren tweeted an article titled ‘Do you understand what Serena said after winning a point against Vinci?’ before adding the comment “disgusting”.

When asked by Seven Network commentator Jim Courier who was in his team, world No.58 Hyeon Chung obliged.

So, who was there?

Some friends, agents and a coach, and, of course, his mum.

She was delighted to be identified and sent her son a big love heart which we just loved.

For the past week-and-a-half, Hisense Arena has hosted many of the world’s best tennis players.

But when the Open is not on, the stadium hosts basketball matches and concerts, and, as part of a cross-promotion with the NBL, is staging Melbourne United’s home clash against Cairns during this year’s tournament.

Have a look at how the venue was transformed from tennis court to basketball court here.

Enjoy the tennis and the basketball at the #AusOpen tonight.

A ground pass gets you access to Hisense Arena for the AO Game: Melbourne United v Cairns Taipans, Margaret Court Arena, outside courts and all the music and entertainment on site: https://t.co/38hcmBogHu pic.twitter.com/TglUfwGBp0

Fans with tickets to the day session on centre court will start with a doubles clash before Caroline Wozniacki’s bid for a first grand slam title continues when she takes on Elise Mertens.

Top seed Simona Halep will then come up against Angelique Kerber for a spot in the decider.

Australian Open 2018: US star aims fire at the media in angry attack