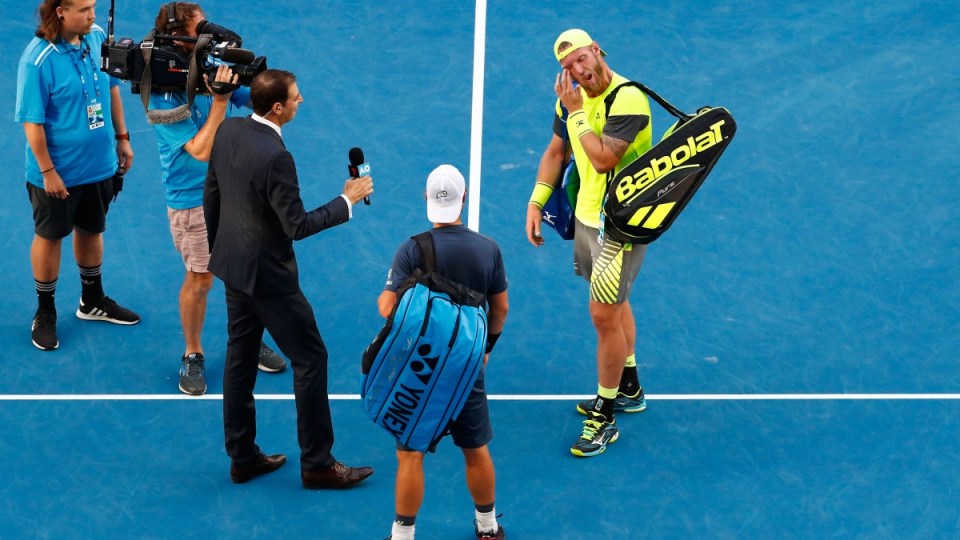 Groth could not hide his emotions after the defeat. Photo: Getty

Lleyton Hewitt said it was “pretty special” to play in Sam Groth’s last match of professional tennis, even if it was in a defeat.

The duo – who seemed like real darkhorses for the men’s doubles title after stunning third seeds Jean-Julien Rojer and Horia Tecau – were knocked out in the quarter-finals of the Australian Open on Wednesday.

Colombian pair Juan Sebastian Cabal and Robert Farah were too good for Hewitt and Groth, winning 6-4 7-5 in one hour and 29 minutes.

The 11th seeds were better in the key moments, much to the disappointment of a big crowd inside Margaret Court Arena.

For Groth, that is it, the big-serving 30-year-old having already announced his retirement before the Open started.

He was emotional and struggled to hold back the tears when interviewed on court after his loss.

“First, I’ll just say thanks to Lleyton for coming out and playing with my last [tournament],” he said.

“Obviously it’s not the way we wanted to go out.

“And thank you to all my team, everyone who’s worked …”

Groth then broke down, leaving Hewitt to speak about his contribution to the sport.

“We’ve played some big matches together,” the former world No.1 said.

“That was one of the main reasons why I came back [out of retirement] to play.

“I loved playing Davis Cup with this fella. He wore his heart on his sleeve.

“He would do anything for the green and gold.

“For me to come out and play alongside him in his last event was pretty special.

“We had a great tournament … we didn’t come into it with a lot of expectations but, you know, we had a great week and a half.”

Groth regained his composure before paying tribute to those close to him.

“Thanks to my fiancee, Britt, obviously my family and all the coaches that have worked with me over the time,” he said.

“And especially the Aussie fans. I appreciate everything that you guys have done for me so thank you to everybody. I appreciate it.”

The Aussie pair did not start well, broken in the very first game with Groth serving three double-faults.

That break proved crucial, as despite Hewitt’s excellent returns and a pro-Australian crowd, the local pair could not force a break of their own.

That saw the Colombians take the opening set in 43 exciting minutes and the second set dished up more of the same.

Thrilling rallies and smart volleys were again forthcoming, but there was no early break.

Instead, it came at 5-5, with Groth serving, and that gave Cabal and Farah the chance to serve for the match.

They needed no second invitation, either, with the victors, who made just nine unforced errors in the match, holding their nerve to claim victory.

Groth reached a career-high singles ranking of world No. 53 in 2015.

He turned professional in 2006 and was named Newcombe Medallist in 2015, given to Australia’s best tennis player every year.

His career highlights include playing on centre court at Wimbledon against Roger Federer and reaching the third round of the 2015 Australian Open.

He will continue to write for The New Daily through this year’s Open.