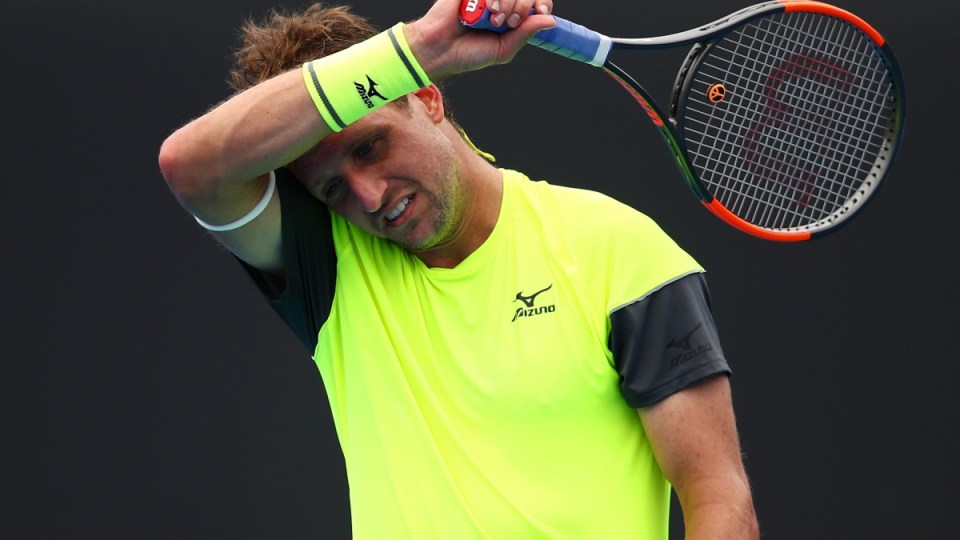 Tennys Sandgren has wiped most of his Twitter history. Photo: Getty

Tennys Sandgren has never experienced the spotlight like this.

The world No.97 entered the Australian Open without a single grand slam win in his career. He now has four, including two top-10 scalps.

Sandgren’s social media activity came under the microscope after his latest win, a five-set triumph over fifth seed Dominic Thiem, when it was discovered that he followed a number of alt-right figures on Twitter.

It also emerged that the 26-year-old American said a conspiracy theory that linked Hillary Clinton to a paedophile ring was “sickening and the collective evidence is too much to ignore”, and that he had re-posted a video from a white nationalist.

When that was put to Sandgren in his post-match press conference, he defiantly responded: “Who you follow on Twitter, I feel like doesn’t matter even a little bit.

“What information you see doesn’t dictate what you think or believe and I think it’s crazy to assume that … I think that’s ridiculous.”

Sandgren was then asked if he felt he supported some of the alt-right movement.

“But no, I don’t, not at all. As a firm Christian, I don’t support things like that. I support Christ and following Him.”

Sandgren’s coach, Jim Madrigal, tried to change the subject in the press conference, and the very next day, astute observers spotted that Sandgren had been on a deleting spree.

In fact, by 8.30pm (AEST) on Tuesday, Sandgren had just one tweet remaining on his profile – a far cry from the 4800-plus that were there earlier this week.

German Mischa Zverev was fined a whopping $45,000 for an unprofessional effort in his first-round defeat to Hyeon Chung.

The fine – almost all of his $60,000 prize money for being a first-round loser – is so big because he retired just 48 minutes into the match due to a viral issue and tennis officials are desperate to see the end of players calling it quits in the opening round.

In previous years, players who retired in the first round were still entitled to prize money, which, in the instance of Spain’s Nicolas Almagro, saw him get $50,000 – or $2173.91 a minute – for his troubles last year.

“Any player who competes in the first round main draw singles and retires or performs below professional standards may now be subject to a fine up to [the equivalent] first round prize money in 2018,” a tennis rule updated in November reads.

The new rule does have an upside for players, with those who cannot compete due to injury or illness getting half the prize money a first-round loser gets if they pull out before their match. It also allows other players to fill their spot.

He had already been fined during the Open for shouting obscenities at fans and Nick Kyrgios was fined $A2510 for not being ready to start his match against Jo-Wilfried Tsonga on time.

Kyrgios was running behind schedule after deciding to change his shirt.

Kyle Edmund’s win over Grigor Dimitrov ensured there will be two unseeded players in the last four of the men’s singles.

An unseeded player will be in the semi-finals of the women’s singles, too – the 10th time in a row it has happened at a grand slam.

After one match during the day, Roger Federer returns to prime time when he takes on Tomas Berdych on Rod Laver Arena.

Sandgren and Hyeon Chung also meet on Wednesday, as do top seed Simona Halep and Karolina Pliskova in the women’s singles.

Former world No.1 Angelique Kerber takes on Madison Keys in the other clash on Rod Laver Arena.

The Daily Deuce: Why a US tennis player deleted thousands of tweets