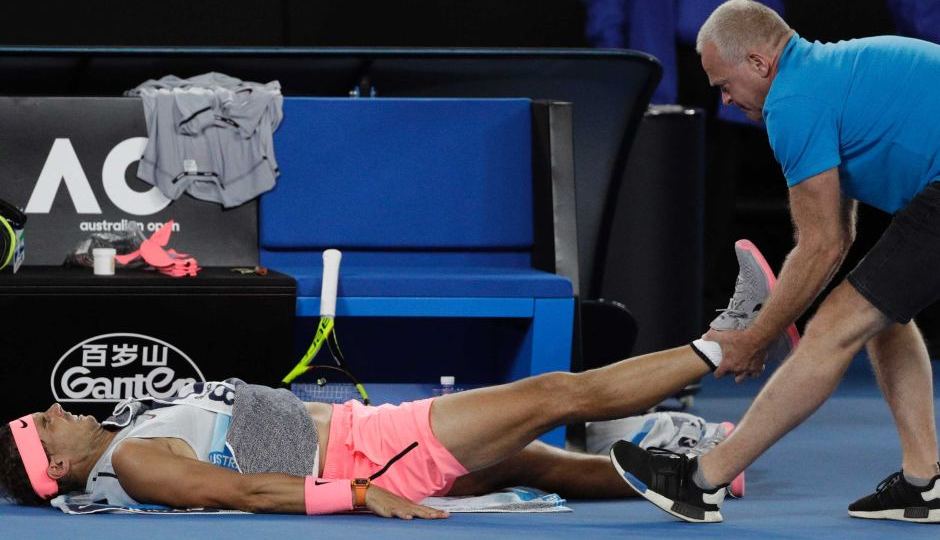 Rafael Nadal was forced to withdraw from the Australian Open on Tuesday evening but delivered a parting shot at the ATP Tour, claiming “very, very hard surfaces” are leaving the sport’s stars worried about their lives after tennis.

Nadal, who had repeated treatment on what he described as a “high in the leg” injury throughout his quarter-final with Marin Cilic, pulled out early in the fifth set when the Croatian led 3-6 6-3 6-7 (5-7) 6-2 2-0.

And the world No.1 was distraught at his post-match press conference, claiming his latest injury was “really tough to accept” before urging those in charge of the men’s tour to consider why so many top players have been battling injuries.

Unfortunate scenes here with the world No.1 Rafael #Nadal retiring hurt in the QF 😥@Cilic_Marin progresses through to the SF. #AusOpen pic.twitter.com/IEjPruzvdi

Novak Djokovic (elbow) and Andy Murray (hip) missed the second half of the 2017 season, with only the former travelling to Australia for the Open.

Djokovic was clearly affected by the problem in his fourth-round loss to Hyeon Chung in Melbourne, while fellow star Kei Nishikori (wrist) did not even come to the Open.

“Somebody who is running the tour should think [a] little bit about what’s going on,” Nadal said.

“Too many people [are] getting injured. I don’t know if they have to think a little bit about the health of the players.

“Not for now that we are playing, but there is life after tennis.

“I don’t know … if we keep playing in this very, very hard surfaces, what’s going to happen in the future with our lives.”

Nadal, who has been battling a knee injury, described his retirement as “an opportunity lost”, but also paid tribute to Cilic for his “very aggressive” style.

Cilic thumped 83 winners to go with 62 unforced errors during a tension-filled encounter.

When told about Nadal’s comments, Cilic responded: “Just in this last year, obviously [the] beginning of this one, we see a lot of top guys that are injured.

“In the end it’s on all of us to try to take care of our bodies, to try to pick the right schedule, to listen to our body, how it feels.

“We are all very different. I also had troubles with my knees in the past because hard courts are different … it’s also on me to try to take care of it and use the schedule the best I can.”

Cilic will play unseeded Brit Kyle Edmund in the semi-finals, after he stunned third seed Grigor Dimitrov in four sets earlier in the day.

The sixth seed gave up seven break points in the opening set, and although his big serve saved him several times, a poor error handed Nadal the initiative.

He seized on it, taking the first set 6-3, only for Cilic to ramp up his aggression.

That approach worked in the second set, sealed with a big ace, but even though he saved a set point at 4-5 in the third, Cilic was undone in a tiebreak briefly – and farcically – paused by a crying baby.

Cilic, who was widely criticised for crying against Roger Federer in last year’s Wimbledon final, stayed calm and composed in the fourth set to make the most of what was a clearly hampered Nadal.

Twice the Spaniard sought medical attention before the start of the fifth set but given Nadal’s propensity to play – and win – injured, it was no foregone conclusion.

Even on one leg, Nadal, who has now retired just twice in 264 grand slam matches, saved five break points in the second game of the final set.

But Cilic eventually took his chance, prompting Nadal to concede and open up the draw even further for defending champion Roger Federer.

Dimitrov could not hide his disappointment.

“I’m very critical with myself. I always want a lot from myself,” he said.

“When I don’t reach a certain goal that I’ve planned, it really drops me down. It makes me sad.”

She will take on second seed Caroline Wozniacki, who reached her second Australian Open semi-final with a 6-0 6-7 (3-7) 6-2 victory over Carla Suarez Navarro.

Wozniacki lost an opportunity to wrap up the match in the second set when she failed to capitalise on a match point.

“I was unlucky not to get that match point to close it out, which was frustrating,” Wozniacki told reporters after the match.

Despite the match starting just after 11.30pm local time and not finishing until after 1.30am, Wozniacki said she had no issue with the scheduling of the match that followed the Rafael Nadal-Marin Cilic quarter-final.