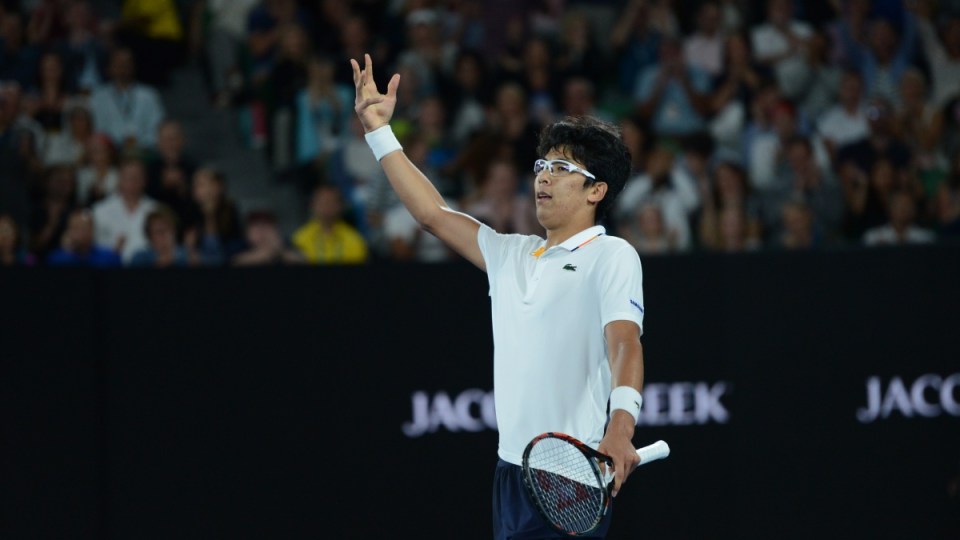 Novak Djokovic and Dominic Thiem were stunned by a pair of unseeded players in a dramatic night of Australian Open action on Monday.

Six-time Melbourne Park champion Djokovic was clearly hampered by a long-running elbow problem but could not even win a set against South Korean Hyeon Chung, who grew up idolising the Serbian and, as a result, played just like him.

Thiem, seeded fifth, saved a match point in the fourth set but was eventually outfought by world No.97, Tennys Sandgren, of the United States.

Sandgren, who thrashed Stanislas Wawrinka in straight sets last week, entered the tournament without a grand slam win in his career.

Now he is preparing to play Chung in an Open quarter-final that no one could have predicted.

“He deserved to win. Whenever he was in trouble he came out with some great passing shots and at the back of the court he was like a wall.”

Chung’s win came just two days after he surprised world No.4 Alexander Zverev and said: “Tennis, not that popular in Korea.”

Even a couple of hours after beating Djokovic, Chung’s official Facebook page had just 7000 followers – a drop in the ocean in light of South Korea’s 50 million-plus population.

When quizzed by The New Daily whether his latest win would make big news back home, he responded: “I think so.

More attention is certainly coming Chung’s way after a win that showed his brilliant skill from the baseline.

“I didn’t know how I’d win tonight. I was just honoured to play against Novak and happy to see him back on the tour [after a long injury lay-off in 2017],” he added.

For those yet to see Chung play, that much was clear from the early stages.

Djokovic, battling an elbow issue that derailed his 2017, made four double faults in his first two service matches, an indication that all was not well.

He soon trailed 4-0 but somehow clawed his way back, taking a 6-5 lead and making Chung hold serve to force a tiebreak.

Chung did just that, and then watched on as Djokovic made four errors and served a double-fault when it counted.

Djokovic required treatment on his feet at the end of the first set and the second took on a similar complexion; Chung dominated early and took a 4-1 lead, only for the Serbian to fight back.

But when it was his turn to hold serve and set up a tiebreak, Djokovic could not do so, broken when, after a 19-shot rally that showcased Chung’s sublime defence, he struck a forehand into the net.

Djokovic faced an uphill battle from there, and although he fought back from a break down, Chung was too strong in another tiebreak.

“It’s not great,” Djokovic said of his health.

“It’s frustrating … I don’t want to talk about my injury tonight [though].

“Because then I’m taking away Chung’s victory, the credit that he deserves.”

The American could have folded after Thiem rescued the match in a gripping fourth-set tiebreak in which he showed nerves of steel to go for big shots at big stages – and make them.

“I definitely had a real pinch-me moment,” Sandgren said shortly after his triumph.

“This is hopefully real … if I wake up now, I’m going to be real upset!”

Monday’s upsets have opened up the draw for defending champion Roger Federer, if he can get past Tomas Berdych on Wednesday.

Both Federer and Berdych won in straight sets, against Marton Fucsovics and Fabio Fognini respectively.

Meanwhile, former world No.1, Karolina Pliskova, is the final woman through to the Australian Open quarter-finals after defeating Czech compatriot, Barbora Strycova, in three sets.

The towering sixth seed fired off 42 winners and held serve in all but two games but was forced by 20th seed Strycova to fight for every point.

Pliskova will face top seed Simona Halep in the quarter-finals on Wednesday.

Halep has a 5-1 record against Pliskova, including a semi-final victory at last year’s French Open.