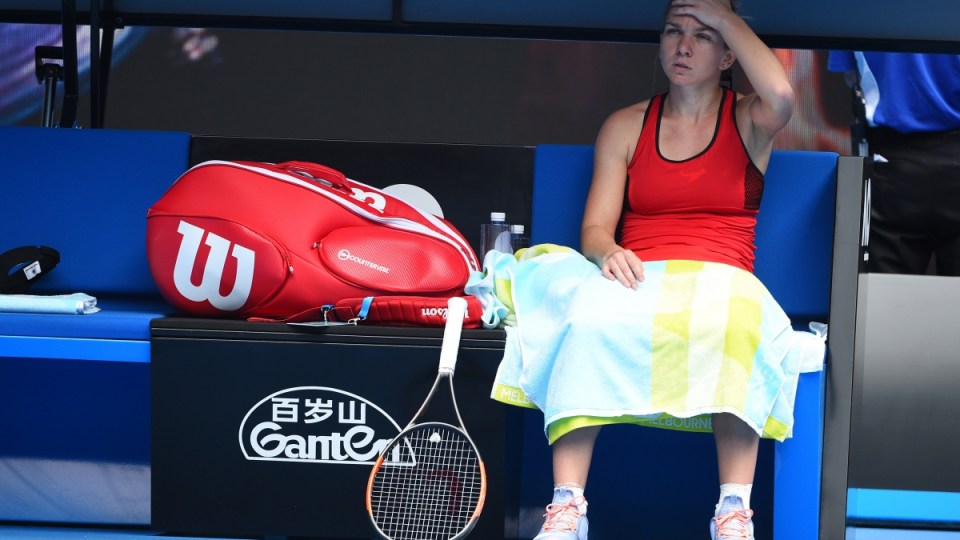 Simona Halep had trouble sleeping after her marathon matches this week. Photo: AAP

Top seed Simona Halep revealed she “couldn’t sleep” due to pain only hours before she booked her spot in the quarter-finals at the Australian Open.

Halep has been managing an ankle injury at Melbourne Park and played out the third-longest women’s singles match in tournament history on Saturday.

And the Romanian opened up on just how much the problem is affecting her after beating Japan’s Naomi Osaka in straight sets on Monday.

“But I slept before the match, two hours … perfect, perfect hours. I was, like, fresh after that. I felt good.

“Ankle is still sore. But, you know, I’m not thinking about that anymore.

“I saw that I can win matches with it, so now I’m not that stressed anymore.

“Maybe I get used to the pain and I’m not thinking that much that something can happen.”

American Tennys Sandgren has been one of the stories of the tournament.

But he was seething during the third set after claiming a member of Thiem’s players’ box was clapping as he got ready to serve.

“When I say someone in the crowd’s making noise, you say: ‘I don’t know’.

Sandgren appears to be accusing someone in Thiem's box of gamesmanship, ie clapping before his second serves. #AusOpen pic.twitter.com/aOKhFBHYG7

When the umpire told Sandgren she could not locate the clapper, he responded: “There’s one person clapping in a sea of 2000 people.

“You have no idea where it came from? Wow … that’s insane.

“You haven’t said anything. Somebody’s done something and you’ve not stopped them from doing it again. That’s what I’m saying.

“Nothing happened … why would he not do it again?”

“My boyfriend was looking [at] her game earlier … I forgot to ask him what she play [like].

“So, I actually have no plan to go on the court.”

Su-Wei Hsieh opened up on her very unique preparation against former world No.1 Angelique Kerber.

Hsieh started brightly, winning the opening set, but was eventually beaten in three.

Just days after Nick Kyrgios met a hero of his, Will Smith, another Aussie sports star experienced the same joy.

This time it was Australia cricket captain Steve Smith, widely regarded as the best batsman in the world.

Smith has been a long-time – and very public – admirer of Roger Federer so he was no doubt delighted to catch up with the Swiss maestro.

Sure there’s a few success stories to swap there…#AusOpen pic.twitter.com/DK0pVwdIaW

Federer’s straight-sets win over Marton Fucsovics was notable for many reasons.

Not only was it the 14th time in 15 years that the 19-time grand slam winner has made it to the Australian Open quarter-finals, but in doing so, he also became the oldest man to reach the last eight since Ken Rosewall in 1967.

The match was Federer’s first against a Hungarian on the tennis tour since 2002.

Top seed Rafael Nadal will face his toughest challenge yet when big-serving Croatian Marin Cilic meets him on Rod Laver Arena in the night session.

Cilic, seeded sixth, has lost his past five meetings against Nadal but will enter the much-anticipated clash in good form.

Grigor Dimitrov will play the unseeded Kyle Edmund in the other men’s singles quarter-final.

The Daily Deuce: Halep sleep-deprived but on a mission