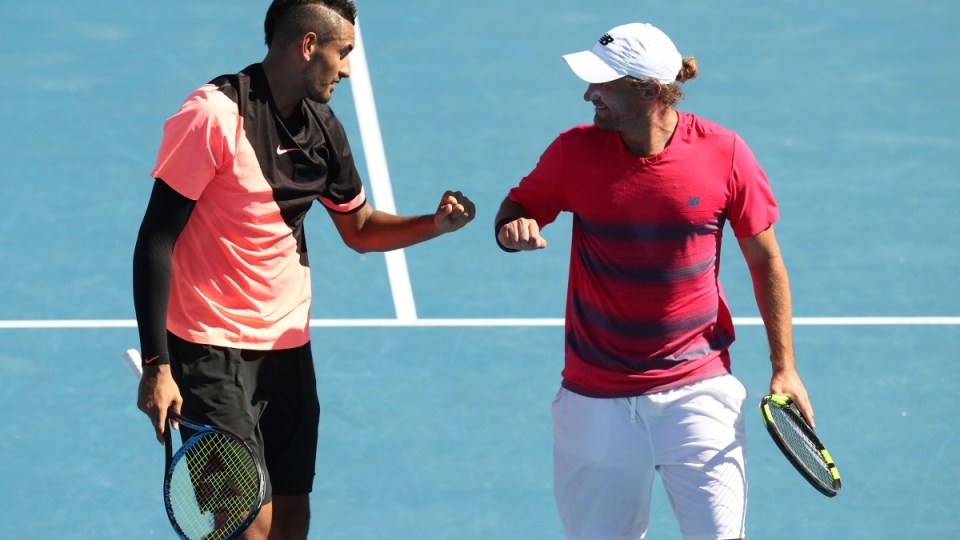 Kyrgios and Reid will play lots more doubles together in 2018. Photo: Getty

Nick Kyrgios’ exit in the fourth round of the Australian Open triggered an outpouring of discussion about how the world No.17 can improve.

Most, including Andre Agassi and Pat Cash, suggested it is time he employs a coach.

But are they missing the point? Does he already have one?

Sydneysider Matt Reid doesn’t exactly fit the bill of a coach, given he is still a professional player who specialises in doubles.

But the 27-year-old has been travelling around the world with Kyrgios since last year, initially as a hitting partner.

Australian tennis great Todd Woodbridge says the relationship between Reid and Kyrgios has grown since then.

“Matt looks like he is transitioning into being a part of that [coaching set-up].

“[For Nick] he is a mate, someone to travel with, someone he trusts, someone that hits the ball really well [so] they can practice together.

“I think as time moves on, it becomes more of that [player-coach] relationship.

While Kyrgios’ off-court set-up is not regular, Woodbridge hailed the impact a settled team around him has had on the 22-year-old.

“What’s been important has been to watch Nick learn and cope with emotion, stress and all of those things, and enjoy what he’s doing,” he said.

“[It wouldn’t help to] have a coach there, telling him he has to do this – because he will retaliate against that.

“Right now he is working out exactly what’s best for him and I think we can see that.

“It’s pretty obvious over the summer that there’s been improvement in that [attitude] space.”

Lleyton Hewitt also backed Reid’s work with Kyrgios, and the arrangement had another supporter in former Wimbledon champion Goran Ivanisevic.

Ivanisevic told The New Daily: “I was very surprised, positively, this time [tournament] about Nick.

“I was hoping that he was going to win [against Grigor Dimitrov] but he didn’t lose because of his head and distraction, he lost because Dimitrov was too good.

“If Nick can be Nick from the last couple of matches, then you can see Nick in the top five very soon. With a coach or without a coach.”

Who is Matt Reid?

Reid, who attended the famed Nick Bollettieri Tennis Academy in Florida in his teenage years, hit a career high of world No.183 in singles.

He has played in the main singles draw at Wimbledon, but most of his success has come in doubles.

In 2008, he lost the boys’ doubles final at the All England Club with Bernard Tomic, and, at his peak, he was ranked 60th in the world in doubles.

He currently sits 92nd and regularly plays in doubles tournaments with Kyrgios, like he did at this year’s Australian Open.

Enjoy this day man, every other day you are too busy being the most selfless human I've ever met, but on this day.. it's all about you. Never enough thanks from me. Happy Birthday @matty_reidy

The pair won their first-round clash in sweltering heat at the Open this year, before withdrawing from the tournament to allow Kyrgios the best possible preparation for his Dimitrov clash.

But it was only at Reid’s suggestion, after Kyrgios insisted he did not want to let his mate down.

In a recent column for Players Voice, Kyrgios said: “Matt is so many things to me: part doubles partner, part coach, part training companion.

“Last year was his first full year travelling with me and I leaned on him a lot.

“He’s a great training partner … above all, he’s a good friend. He tells me the truth. If he doesn’t like something I’ve done, he’ll give it to me straight.”

Reid has won six ITF titles and one Challenger event during his career and, like Kyrgios, looked up to Hewitt when he was younger.

Reid is just five years older than Kyrgios and it is clear that the situation is unconventional.

But it is also working.

Australian Open 2018: What most people forget in the discussion about a coach for Nick Kyrgios