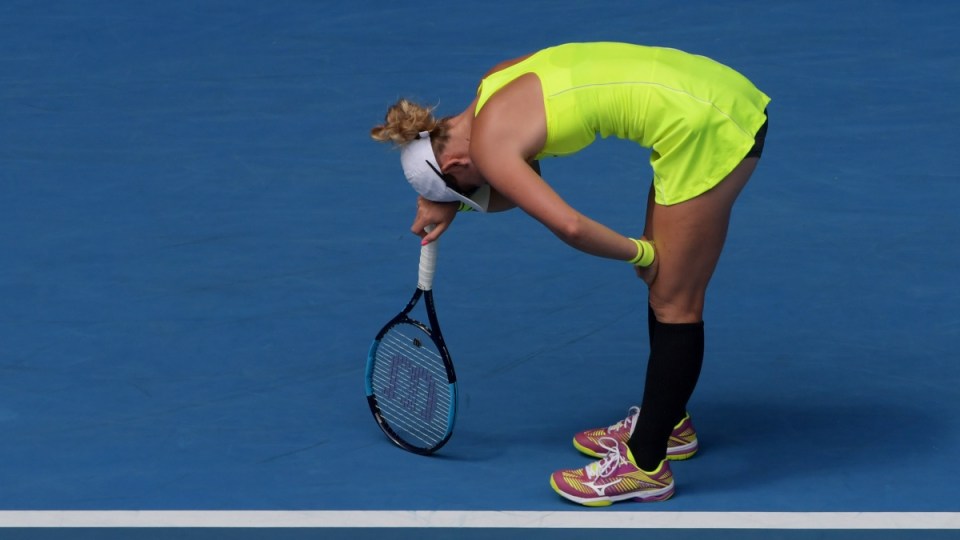 Anastasia Rodionova was gutted after her injury. Photo: AAP

It was impossible not to feel for Australian Anastasia Rodionova at Melbourne Park on Sunday.

Rodionova, a highly accomplished doubles player who has represented Australia in the Fed Cup, suffered a calf injury in the first set of a third-round encounter on Margaret Court Arena.

Rodionova, playing with Nadiia Kichenok of the Ukraine, faced a tough battle against 10th seeds Irina-Camelia Begu and Monica Niculescu, trailing 4-1 in the early stages.

The Aussie then suffered a calf injury, reducing her to tears, before she returned to the court.

However, she was unable to continue prompting another flood of tears as the distraught player informed her partner she could not go on.

Such a brave effort from Anastasia Rodionova, but unfortunately she can't continue on 😔

Begu and Niculescu through to the QF. #AusOpen pic.twitter.com/kzJt6RwNgv

Making up for Rodionova’s disappointment was the fact Lleyton Hewitt and Sam Groth won through to the quarter-finals of the men’s doubles.

Fresh off an exciting three-set win over the third seeds on Saturday, the Aussie pair kicked on – albeit with a slice of luck.

A wrist injury suffered by Spain’s Albert Ramos-Vinolas caused an early retirement, with scores locked at 3-3 in the first set.

Just 22 minutes were played, meaning Hewitt and Groth will be fresh for their last-eight clash against Colombian pair Juan Sebastian Cabal and Robert Farah.

A tweet from the Australian Open’s official account on Sunday highlighted just how durable the Williams sisters have been.

While Venus was a first-round loser at Melbourne Park in 2018, and Serena did not travel to Australia after giving birth last year, both remain key players in women’s tennis.

That is remarkable given, as the Open tweeted, January 21 of 1998 was the first time the sisters met in a professional tournament.

Another special guest drops in …

First there was Will Ferrell. Then Will Smith dropped in at Melbourne Park.

Now, chef Gordon Ramsay is the latest international celebrity to drop by the first grand slam of the year, posting a photo on Twitter of himself courtside.

And, to the surprise of nobody, Ramsay found himself in the Australian Open kitchen, catching up with an old colleague.

“I’ve been playing pretty well and I think you can tell my confidence is pretty good.

“I tried to swing today [for a tweener] and it actually went in. That’s the first time in a match.

“So if I may say so myself, I was pretty proud of that. I’m admiring myself right there. I’m sorry.

“But, you know, I’ve made a few tweeners in practice. But never in a match.”

Caroline Wozniacki thrashed Magdalena Rybarikova 6-3 6-0 to book a quarter-final spot but was most pleased about her ‘tweener’ … even though she lost the point.

It will be the first day of the tournament with no Australian involved in singles action, meaning Novak Djokovic will play Hyeon Chung under lights at Rod Laver Arena.

Roger Federer is also in action on centre court, but has to make do with an afternoon timeslot when he meets unseeded Hungarian Marton Fuscovics.

In the women’s singles, Ash Barty’s conqueror Naomi Osaka takes on top seed Simona Halep on Margaret Court Arena, while Czech pair Karolina Pliskova and Barbora Strycova face off against each other.

Those looking for an Australian flavour to day eight can check out a host of mixed doubles, legends, boys and girls clashes, with Sam Stosur and Groth set to meet third seeds Ekaterina Makarova and Bruno Soares.

Unvaccinated Pauline Hanson has COVID
‘Should have been a penalty’: Boy crash-tackled by PM gives his verdict
Amber Heard’s sister and friend give evidence
Russian Google to file for bankruptcy
Man arrested at NSW school for bestiality
Concern about COVID-19 deaths in aged care
Australian Open 2018: Ashleigh Barty and Maria Sharapova knocked out of the Open
Today's Stories

Australian Open 2018: The moment a local broke down in tears and quit