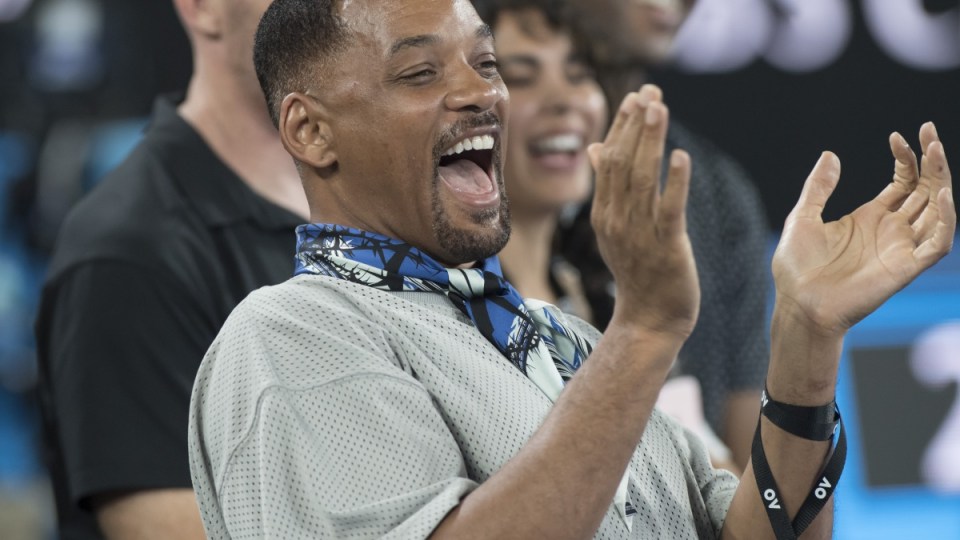 Smith sat court side and loved what he saw. Photo: Getty

Following Will Ferrell’s lead, another Hollywood star dropped in to the Australian Open on Friday evening.

In a match that lived up to its blockbuster billing, Kyrgios showed nerves of steel, first saving a set point in the third before he came back from 5-2 down in a fourth-set tiebreak.

Kyrgios said afterwards that seeing Smith watch him made him “so nervous” – as if he wasn’t enough already against Tsonga, his childhood idol.

So when asked by The New Daily who got him more flustered, Kyrgios struggled to answer.

“I was nervous for both,” he said.

“I shook hands with Jo at the net [after the match] and he was like: ‘Great match.’ I was kind of staring. I didn’t really say anything.

“He kind of just smiled, kind of embraced me.

“[With Will] that was amazing. No joke, he’s like my favourite actor. I get asked if one person were acting your life – I’d always pick him.

“It was surreal seeing him tonight … I kept looking at him.

“I met him after the match. He was really genuine.”

Kyrgios added that he was “really struggling mentally” after last year’s Australian Open but that Lleyton Hewitt’s influence on him had been profound, while he was happy with the way he fought back after losing the second set.

“I thought the level in the third and fourth sets was really high. I responded well,” he said.

Tsonga clashed with a fan during the fourth set for sledging him and explained why after his defeat.

“On the set point, in between the first serve and the second, the guy was talking to me and telling me ‘You are under pressure now’ when I was bouncing my balls,” he said.

“I lost it and I drive [myself] a little bit crazy. It’s not fair … the guy was feeling safe because he was, you know, upstairs.

“I just tell him ‘Come [down here] now to see if you feel the pressure or not’. That’s it.”

A fourth-round meeting with third seed Grigor Dimitrov will follow for Kyrgios, a match sure to be played in prime time on Sunday evening.

His start was less than ideal, hit with a time violation before the first point had even played for not being ready, but it had little impact on the 17th seed, who raced to a 3-1 lead.

The 32-year-old Frenchman broke back, forcing the first of three tiebreaks, but, tellingly, Kyrgios won them all.

It was a double-fault that cost Tsonga the first tiebreak, ironic given how well he served throughout the match, but he roared back into the match in the second to level things at one set apiece.

Smith was noticed by fans on the big screen during the third set, leading some to sing ‘Bad boys, bad boys, what you gonna do?’ at the four-time Grammy Award winner – a nod to the song used in the actor’s popular film series Bad Boys.

Kyrgios, branded with that tag a long time ago, had no answers for Tsonga’s serve but kept holding himself before bravely saving a set point with a stunning forehand.

He kicked on from there, claiming the third, and then, again facing adversity in the fourth, dug deep, winning the last five points to overturn an ominous looking tiebreak deficit and progress.

This was a tough, hard-fought and mature win, one that you just could not see Kyrgios winning 12 months ago.

Easy does it for Nadal

Australian Open 2018: Another Hollywood star watches on as Kyrgios wins a classic