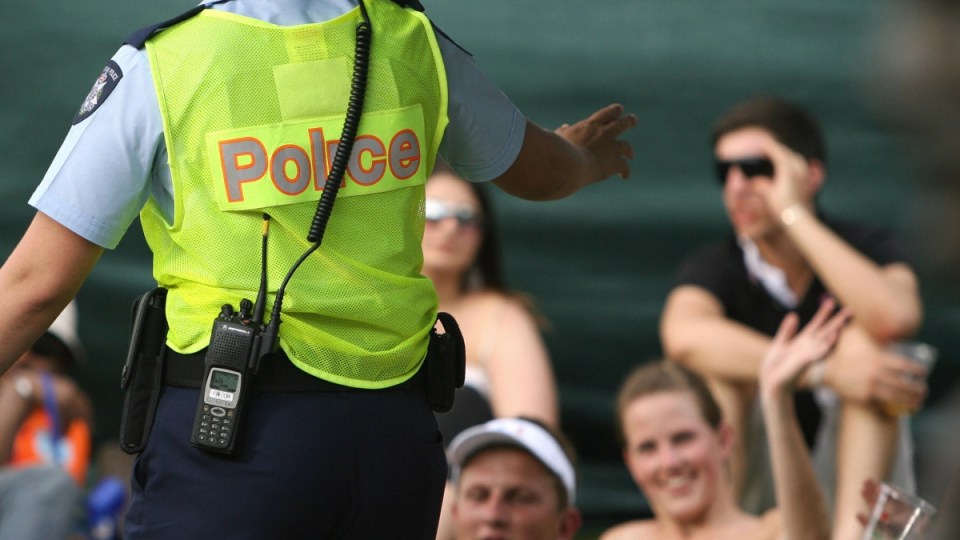 A file photo of a Victoria Police officer at the Australian Open. Photo: Getty

The fortnight of the Australian Open is usually filled with compliments about Melbourne and its friendly nature.

But five tourists – two Americans and three Germans – are not likely to share that view after Victoria Police confirmed they were attacked in the Queen Victoria Gardens on Wednesday night.

The Nine Network reported that the tourists were in Melbourne for the Australian Open and were targeted after leaving the tennis.

“The charges related to an alleged robbery and assault on a 52-year-old man and a 17-year-old boy, both US citizens, in the Queen Victoria Gardens just after 11pm.

Nine said the 52-year-old American, who they named as highly acclaimed physician Edmond Pribitkin, was placed into an induced coma, while his son suffered a broken nose and concussion.

Investigators made five arrests in Birrarung Marr on Wednesday evening.

Three 17-year-old boys were charged with a number of offences, including intentionally causing serious injury with gross violence and affray, and were remanded to appear in court on February 8.

Two girls, both 16, were charged with attempted affray, robbery and assault and were bailed to appear in court, also on February 8.

A caller rang in to debate the topic with him and, just after 12.30am, ’Todd from East Brighton’ was put to air.

After an exchange of views, Moclair quickly twigged it was actually Australian doubles legend Todd Woodbridge on the other end of the phone and asked him if he had “any background with the sport himself”.

Woodbridge responded: “A little … I was driving home and I couldn’t help myself … I thought, you know what, maybe I’ve got to educate Tony Moclair.

“The Woodies [the nickname for the famous doubles pairing between Woodbridge and Mark Woodforde] … they were pretty good … and they were quite entertaining!”

You can hear the humorous exchange here.

The game that just wouldn’t end

Brit Kyle Edmund really had to work in his five-set win over Nikolas Basilashvili of Georgia.

Not only did the match, played in 39-degree heat, run for three hours and 34 minutes, but one game went for a ridiculous 20 minutes.

It featured 15 deuces and eight break points for Edmund, who finally broke to claim a 2-0 lead in the fourth set – which he went on to win 6-0.

And her fans are getting in the act, too.

Is this not the greatest thing ever?! Thank you Vegemite Fam 😍💛 #FuelledByVegemite #Vegemite pic.twitter.com/uovD5xepoi

American CoCo Vandeweghe was fined $US10,000 on Friday – the biggest fine of the Australian Open so far.

In a match in which Vandeweghe refused to return to court until she was given a banana, the 10th seed was also accused of shouting obscenities towards her opponent, Timea Babos.

According to News Corp, video footage of Vandeweghe showed her shouting “F*** you, you f***ing b****,” to Babos.

For the third successive match, Roger Federer will play at night on Rod Laver Arena, with the Swiss maestro to take on Frenchman Richard Gasquet in what should be an exciting clash.

It follows a meeting between two players who held the world No.1 ranking in women’s tennis, Maria Sharapova and Angelique Kerber.