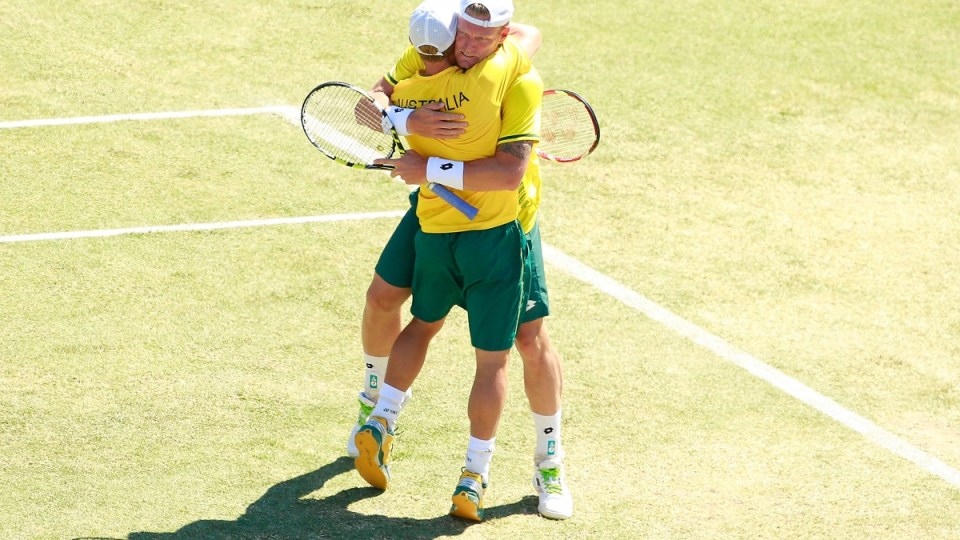 Hewitt and Groth have regularly played Davis Cup doubles with each other. Photo: Getty

I idolised Lleyton Hewitt as a kid.

His performances, particularly for his country, inspired me.

I still remember where I was and what I was doing when he came from two sets down to beat Roger Federer in that Davis Cup semi-final of 2003.

So it was a big thrill to meet him and many years down the line, we are great mates.

We’ve shared a lot of experiences together, from playing together in big Davis Cup and Australian Open matches to trips to the footy and rounds of golf.

That’s why it is so great for me, at my last Australian Open, to be playing doubles with Lleyton again.

Admittedly, he wasn’t a logical choice as partner. He is/was retired, after all.

But I enjoy playing with him and because he is so passionate, it doesn’t take much to get him going.

We’re similar sorts of players, in that we both wear our heart on our sleeve, and that means we feed off each other – and the crowd.

The crowd was fantastic in our first-round win and we’re going to need all of that support against Jean-Julien Rojer and Horia Tecau on Saturday.

They are seeded third and won the US Open last year, so it’s a tough match.

But if we can get through this, who knows how far we can go.

One of the drawcards of playing with Lleyton is that I know every time we walk out on court, a big crowd will be there.

And those fans are always going to be with us, no matter who we’re playing.

I knew that playing in front of them would be a fun way to leave the Australian Open and tennis.

I’m also playing in the mixed doubles with Samantha Stosur and we had a good win on Friday.

It’s great to be back on court with Sam and it is a similar feeling to last year.

Back then, Sam was coming off a tough singles loss and there’s always a lot of pressure on her when she plays in Australia.

So we try and make the mixed doubles a fun environment and hopefully win a few matches.

We made the semi-finals last year and we’re confident we can push towards that and perhaps go even better.

Both of my matches so far have been played in extremely hot temperatures, but for me, it is what it is.

The potential hot weather is one of the reasons we put a good off-season in.

And one of the advantages of being Australian is that we get used to these conditions, at least to a degree, before the tournament starts.

As for my emotions, I’m happy to report that it’s so far so good.

It’s an odd feeling, knowing this is my last tournament, and I did have a few nerves going out before my first match with Lleyton.

But in both doubles matches so far, we’ve won the first set, so I haven’t had the thought of ‘Oh no, we might be going out’.

And because I’m playing in both the men’s and mixed doubles, there is, at least for the moment, still one match to look forward to if I am knocked out.

My view is that there’s plenty of time to rest when you are retired but I might need it after this fortnight.

Between matches, practice, physio commitments, media commitments and a bit of commentary that I’m trying my hand at, it has been pretty chaotic.

Still, if the chaos remains, that means I’m winning matches of tennis.

And that’s always been the way I like it.

Sam Groth won the Newcombe Medal, awarded to Australia’s best tennis player for the year, in 2015. He will write for The New Daily throughout this year’s Australian Open.

Australian Open 2018: What it’s like to play doubles with Lleyton Hewitt