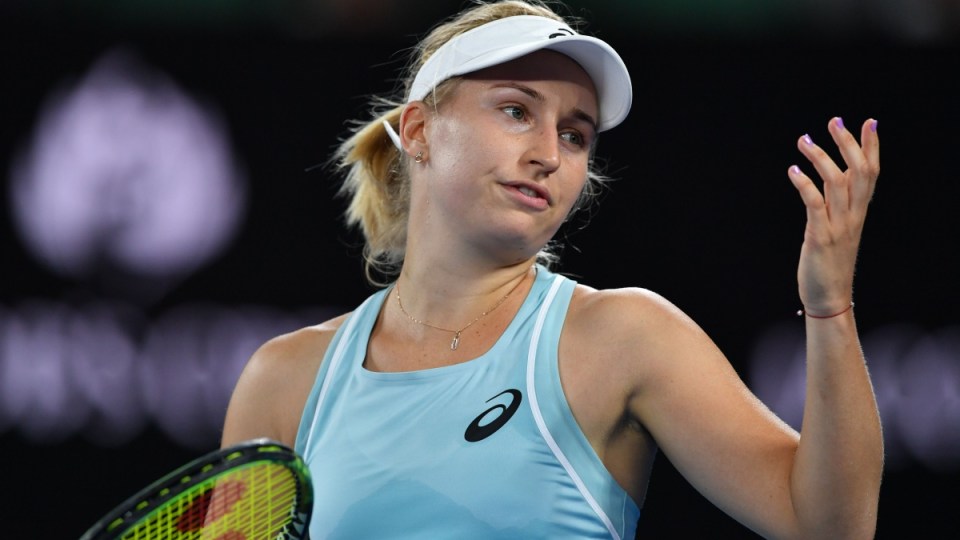 Gavrilova made 40 unforced errors in her defeat. Photo: Getty

The clock read one minute until midnight but somehow it was time to start playing.

A succession of hard-fought battles on Rod Laver Arena meant Daria Gavrilova’s second-round clash with Elise Mertens was the latest starting match in Australian Open history and it did not agree with the 17th seed.

Gavrilova, who raced to a 5-0 lead, capitulated from there, initially blowing eight set points to drop a topsy-turvy opener.

And she grew more and more frustrated in the second set as world No.37 Elise Mertens posted a 7-5 6-3 victory in a match that ended at 1.51am (AEST).

“It is frustrating,” said Gavrilova when asked by The New Daily about the late start.

“But that’s how it is. I just was waiting around.

“It was a bit weird but I’ve had this experience before.”

Gavrilova said she was “ready to go” when pressed further about the timing of the match, saying she preferred to play late than have the match re-scheduled.

She added that “it sucks” to have spurned so many chances to win the opening set.

“I was getting frustrated … I’ve seen it before, girls losing or guys losing from being up 5-0, ridiculous, like I was.

“I was like ‘surely she could have hit a winner or something’ [when watching these matches] but clearly I couldn’t. It’s a new experience.”

Mertens was also diplomatic when quizzed on the scheduling of the match.

“For me, it doesn’t really matter. If the schedule is out, I play,” she said.

“I’m always prepared to play what time, whatever.”

Gavrilova had reached the fourth round in her last two Australian Opens and her exit means just two locals, Ash Barty and Nick Kyrgios, remain in singles contention.

Mertens praised the remaining members of the crowd after her victory and said her belief never wavered.

“It’s almost 2am … [it’s] unbelievable that you still stayed and watched tennis,” she said.

“I know it’s once a year but I’m really grateful that you guys stayed. I’m really glad that I kept on fighting.

“If you believe in yourself, even if you’re 5-0 down, anything can happen.”

At 11.52pm, a young boy named Alex from Brisbane was introduced to the crowd to toss the coin.

It was several hours past his bed time but he fulfilled his duties as Gavrilova won the toss, elected to serve and then held easily.

A marathon 10-minute game followed and although it produced the match’s first break, it proved too long for many, with its conclusion triggering a procession of departures, so much so that the umpire had to ask fans to take their seats given it was not a change of ends.

Around half the crowd piled out when that change came as Gavrilova again held easily, with most fans leaving with the assumption the Aussie would record a routine win. How wrong they were.

Gavrilova’s charge was halted in the sixth game when she wasted four chances to claim the set on Mertens’ serve.

And the Belgian never looked back, saving another four set points throughout a tense opener that lasted 68 minutes.

Just like the first set, Gavrilova begun with an easy hold, but it was her errant backhand that saw Mertens break in the fifth game.

Despite the best efforts of the few hundred hardy souls left at Melbourne Park, they could not rouse Gavrilova, who was most animated when disputing whether she had the right to challenge a line call in the dying stages.

Her match was best summed up when, after breaking Mertens, Gavrilova, serving at 3-5, was broken to love.

It just wasn’t her night. Or morning.