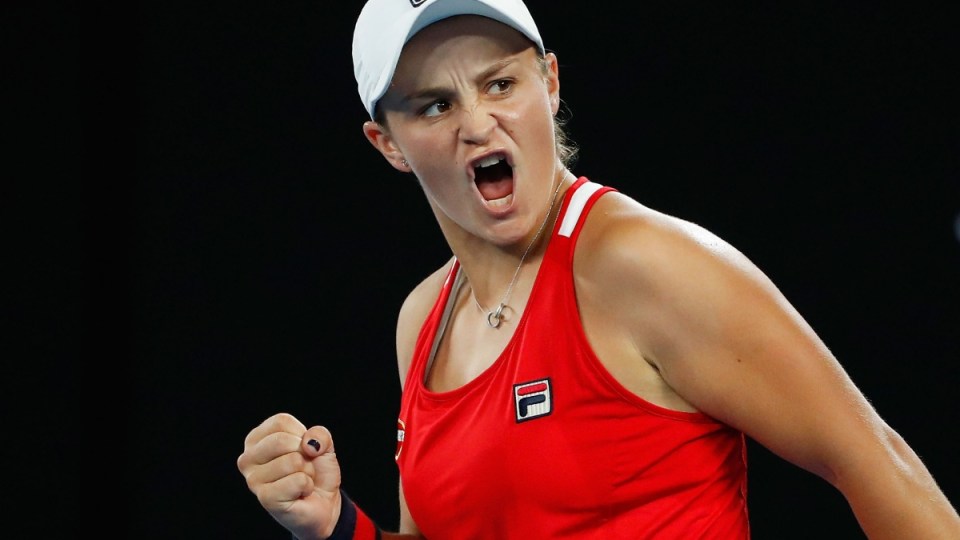 Ashleigh Barty's Open is off to a good start with the draw pitting her against the unkown Thai Luksika Kumkhum, Photo: Getty

How hot is too hot? That was the question on everyone’s lips at Melbourne Park on Thursday as players battled ridiculous on-court temperatures of close to 70 degrees Celsius on Rod Laver Arena.

While the official air temperature hovered around 40 degrees, heat from the stands made life even tougher on court for some of the game’s stars, including Novak Djokovic, Juan Martin Del Potro and Gael Monfils, who all questioned why they were made to play on in the scorching heat.

To be fair, it was still 39 degrees when Barty walked on court at 7.06pm (AEST), but the temperature eased slightly through the match as the 18th seed gradually took control to win 5-7 6-4 6-1.

“There was still plenty of heat in the court, which is sort of the way I like it,” the 21-year-old said afterwards.

“It made it [the court] a little bit more lively … it was sort of nice to still have a bit of heat in the day, even playing so late.

“I probably [have] spent a little bit more time in it than most others [through my life].

“But for me it wasn’t sort of an issue today … sort of fortunate not to get in the middle of the day.”

For Barty, the match followed a similar script to her first-round win over Aryna Sabalenka as she came from behind against a big-hitting opponent.

“It’s nice coming back from a set down [but] you never like being a set down to begin with,” she said.

“[It] certainly gives you some nice satisfaction when you’re able to come back [and] really stick it out.”

Barty will face Japanese teenager Naomi Osaka in the third round on Saturday.

Earlier in the day, Monfils sought regular medical treatment in a four-set loss to Djokovic that was overshadowed by the oppressive heat.

“I’m telling you, I was dying on the court for 40 minutes,” Monfils told reporters.

“It was tough to breathe … I get super dizzy. I think I have a small heat stroke.”

When asked if he thought it was too dangerous to play in that heat, Monfils, who said during the match he felt like was about to collapse, responded: “For sure. You know, we took [a] risk.”

Djokovic, who beat Monfils 4-6 6-3 6-1 6-3, said the conditions were “brutal” and that the match should have been postponed.

“There is a rule [that we use] about index, combination between temperature and humidity,” he said.

“I’m not so sure about that … there are certain days where you just have to, as a tournament supervisor, recognise that you might need to give players [a] few extra hours until it [sun] comes down.

“I think there is a limit, and that is a level of, I guess, tolerance, between being fit and being, I think, in danger in terms of health. It was right at the limit.”

Del Potro beat Karen Khachanov in four sets before he too complained about the weather.

“It was really difficult … almost 40 degrees out there is too much for the health … the weather condition was too high for playing tennis,” he said.

Conditions will only get tougher for players on Friday, with the Bureau of Meteorology forecasting a top of 42 degrees in Melbourne.

Maria Sharapova might not be seeded but she is still a huge chance of winning the women’s singles, as shown in her 6-1 7-6 (7-4) win over 14th seed Anastasija Sevastova.

Third seed Garbine Muguruza’s Open is over, however, after she lost in straight sets to Su-Wei Hsieh, and Stanislas Wawrinka suffered the same fate against world No.97 Tennys Sandgren.