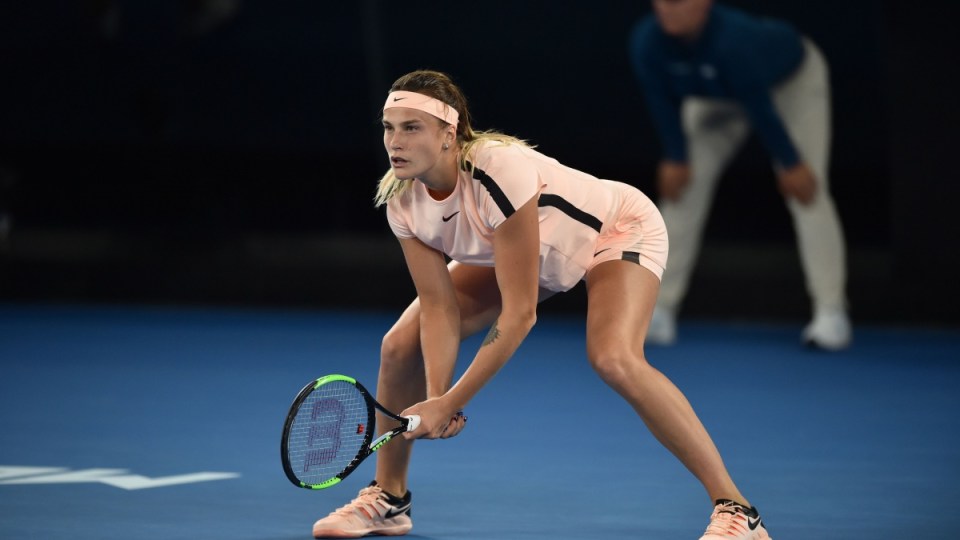 Sabalenka showed why she will be a star of the future with an excellent performance in a three-set loss to Australian Ashleigh Barty on Tuesday evening.

But it was the 19-year-old’s very loud noises throughout the match that angered many as Aussie doubles great Todd Woodbridge – a Seven Network commentator – urged frustrated viewers to “change channel” despite his involvement with the station.

“Nice player Sabalenka but something needs to b [sic] done about her noise and grunting on court!!!!! @WTA change channel #watchsomethingelse,” Woodbridge posted on Twitter.

He later followed up with a message that said he was “so happy” Barty “manages to silence Sabalenka”.

Woodbridge’s view was shared by many, including women’s tennis legend Pam Shriver.

Shriver mused: “Sabalenka has 347 different sounding grunts. What a talent.”

And even current players weighed in, with American Tennys Sandgren – who will play ninth seed Stanislas Wawrinka in round two of the men’s singles – questioning the timing of Sabalenka’s grunts.

“I don’t know how many times this girl has grunted into Barty’s swing, but man it’s really getting to me. It’s clearly affecting her play,” he said on Twitter.

Speaking after the match, Barty said she was prepared and aware of Sabalenka’s loud shrieks but admitted she “was a bit louder than I thought”.

“I knew that I just sort of had to let that go and worry about myself.”

Asked to expand on those thoughts in her post-match press conference, Barty refused to be critical of Sabalenka.

“I knew it was coming … I think if something that small can irritate you, that’s a bigger issue in itself.

“I was prepared for it. I mean, obviously in the first couple of games, you get used to it.”

Barty was far more diplomatic than tennis fans, who were extremely critical of Sabalenka.

Among them was former AFL star Michael Christian, who will begin a new role as the league’s match review officer in 2018.

“Sorry @ashbar96 would love to keep watching and supporting you but can’t take that prolonged screeching from Sabalenka anymore. An absolute disgrace!!! Good luck,” he posted on Twitter.

Fans inside Rod Laver Arena were also angry with Sabalenka, particularly when the umpire told them: “Ladies and gentlemen, please, during the rally, do not scream.”

This produced laughter inside the crowd and then a series of high-pitched shrieks from Sabalenka as she prepared to serve.

“Have the courtesy for the players, please,” the umpire later added.

Aussie wildcard Olivia Rogowska had no answer for 15-year-old Marta Kostyuk of the Ukraine, who made history with her 6-3 7-5 triumph.

Kostyuk is the first 15-year-old to reach the third round of a grand slam since 1997.

Also in the women’s singles, second seed Caroline Wozniacki saved two match points and came from 5-1 down to beat Croatia’s Jana Fett, while Jo-Wilfried Tsonga pulled off a great comeback victory of his own.