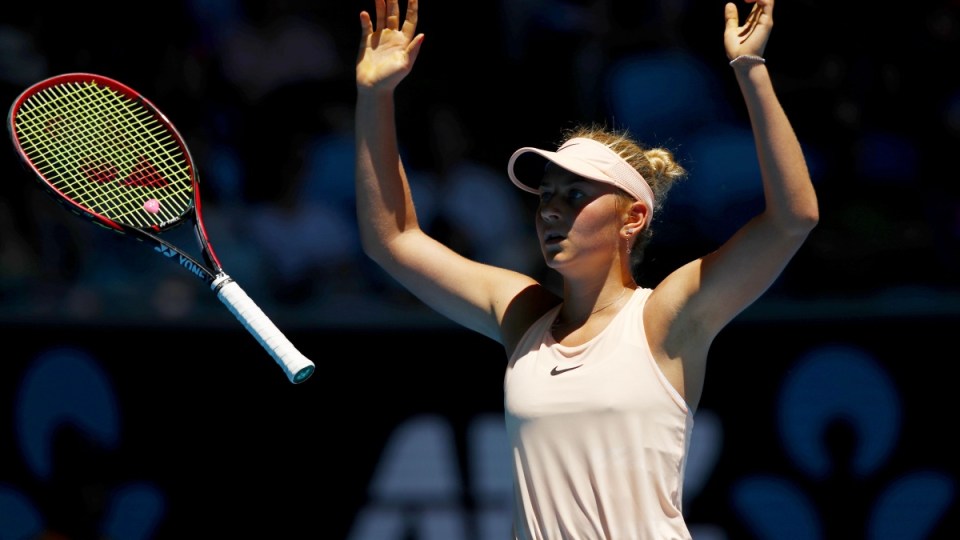 Kostyuk is in a rich vein of Melbourne form. Photo: Getty

Wednesday was quite the day for the Ukraine’s Marta Kostyuk.

Kostyuk became the first 15-year-old to reach the third round of a grand slam since 1997, continuing her remarkable run of form in Melbourne.

She not only won the Australian Open girls’ tournament last year, but Kostyuk also won through three rounds of qualifying last week.

As a result, Kostyuk – whose mother was a professional player – has now won 11 matches in a row at Melbourne Park.

Wednesday’s win was a 6-3 7-5 triumph against Australian wildcard Olivia Rogowska, and she’s now preparing for a third-round battle with compatriot and fourth seed Elina Svitolina.

Her prize for reaching the third round is $A120,000 – not bad for a player who entered the tournament with just $A6505 in career prize money.

Asked what she would do with the money, Kostyuk responded: “I got it and I [will] go and spend.

“Maybe I will get the presents for my family, first of all, of course. Because I have [a] big family.

“And then for myself a bit.”

We think that is the least she deserves.

A day for comebacks

Both Jo-Wilfried Tsonga and Caroline Wozniacki showed their class with outstanding comeback triumphs.

Tsonga trailed 5-2 in the fifth and final set against highly-rated teen Denis Shapovalov of Canada.

Wozniacki also looked like heading for the exit, trailing 5-1 and down two match points against Croatian Jana Fett.

But Fett went into her shell and stopped taking risks, allowing Wozniacki back into the contest.

That’s one way to advertise …

As if betting ads weren’t on television enough, Nick Kyrgios’ older brother, Christos, wore a series of t-shirts with Sportsbet’s logo on them during the 17th seed’s win over Viktor Troicki on Wednesday.

Croatian Ivo Karlovic is no stranger to long matches.

Karlovic’s ace count for the match? 53!

She dropped her 15th consecutive match in round one at Melbourne Park, going down in straight sets to Ana Bogdan.

But if you thought Mladenovic just wasn’t very good, you would be mistaken.

She is ranked 11th in the world, is seeded 11th at the Open and, amazingly, could rise in the world rankings if things go her way over the next fortnight. Incredible.

“I was trying to ask Roger, what hair gel is he using? It keeps his hair perfectly in place every time.”

Fans on Rod Laver Arena are in for a treat with Maria Sharapova to open the day’s action against 14th seed Anastasija Sevastova.

Novak Djokovic will play Gael Monfils on centre court in the day session, which looks to be Thursday’s best match, before Ash Barty and Roger Federer feature at night.

Barty is the only Aussie involved in singles action on Thursday and faces off against unseed Italian Camila Giorgi.

Eugenie Bouchard meets top seed Simona Halep on Margaret Court Arena in another exciting match-up while there is a host of men’s doubles contests that will appeal to local fans.

John Peers – who is seeded second with Henri Kontinen of Finland – is also in action.

The Daily Deuce: The 15-year-old girl who made Open history