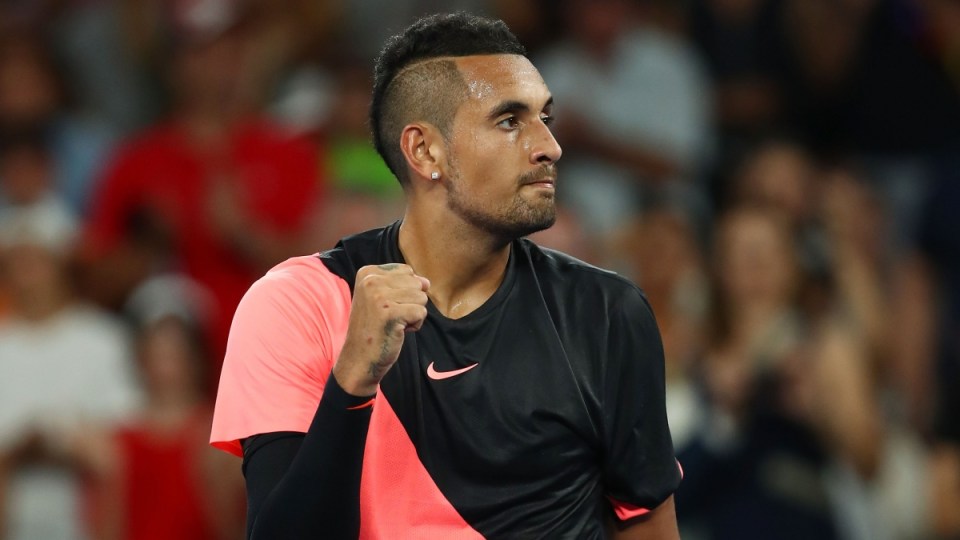 Kyrgios was professional through his three-set victory. Photo: Getty

The top-ranked Australian won 7-5 6-4 7-6 (7-2) to set up a third-round clash with Jo-Wilfried Tsonga. But this match was far from routine. Kyrgios’ matches rarely are.

The 17th seed had to put up with all manner of distractions on Hisense Arena, including a heckler, the court’s PA system failing and a helicopter that hovered above, before claiming a hard-fought victory.

The fact that he overcame all of that and won so comfortably is a feather in Kyrgios’ cap.

He later acknowledged the setbacks may have cost him the match 12 months ago.

“I think last year, the year before, I probably would have been still out on the court right now, could be losing that match,” he told reporters.

“There were a lot of distractions going out there today.”

Most concerning for Kyrgios was the fact the umpire’s score announcements went from muffled to inaudible to not at all.

Due to a speaker failure, for a brief period scores were not announced and music was not played between games, leading Kyrgios to describe the feeling as not like a grand slam match.

“The whole atmosphere changed. I kind of lost my rhythm a little bit,” he said.

Perhaps most bizarre was the self-described ‘social media entertainer’, who walked as close to the court as he could before recording himself screaming repeatedly as Kyrgios prepared to serve.

The fan was swiftly ejected and later boasted on an Instagram story that it “was the greatest thing I’ve done in my life”.

When told that, Kyrgios simply said: “Good on him. Little claim to fame. Let him have it.

“The guy in the crowd was crazy but I didn’t really know what was going on.”

The comment said everything you needed to know about Kyrgios’ mood, with the 22-year-old not prepared to let anything distract him on a night he hit 17 aces and 38 winners.

Kyrgios’ serve saved him when in trouble during the first set, while his powerful backhand won him many points against wily veteran Troicki.

Victory means Kyrgios will face Tsonga – one of his boyhood idols – in round three, a match surely destined for Rod Laver Arena on Friday evening.

“[He is] a guy I looked up to growing up … he made the final [at the Australian Open] in 2008 … I went to all his practice sessions with a new ball. He signed it every day,” Kyrgios said.

Kyrgios was one of five Aussies in action on day three, with John Millman beaten in four sets by Bosnia and Herzegovina’s Damir Dzumhur.

Olivia Rogowska had no luck either, beaten in straight sets by 15-year-old Marta Kostyuk.

Mayer made the world No.1 work for his victory, particularly in the third set, but Nadal thumped 40 winners and made just 10 unforced errors.

Other high seeds to advance included Grigor Dmitrov – who survived a marathon five-set encounter with American world No.178 Mackenzie McDonald – Marin Cilic, Tsonga and Pablo Carreno Busta, while in the women’s singles, Elina Svitolina and Jelena Ostapenko both won.

And the comeback of the day belonged to Caroline Wozniacki.

The second seed saved two match points and came back from 5-1 down in the third set to beat Croatian Jana Fett.