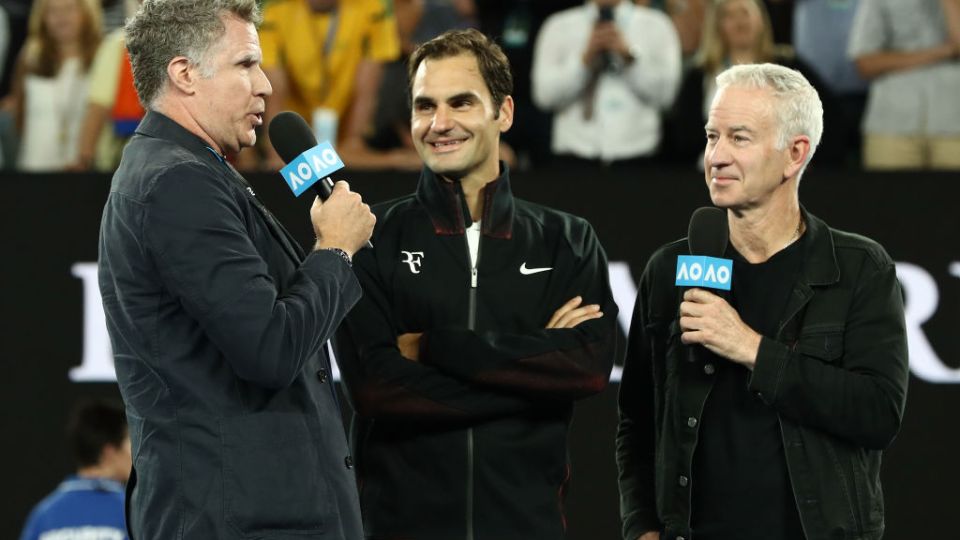 Roger Federer made light work of his first-round clash against Aljaz Bedene at the Australian Open on Tuesday as his trickiest opponent came after the match.

After completing a routine 6-3 6-4 6-3 win on Rod Laver Arena, the 19-time grand slam champion was rendered virtually speechless in a surprise interview with actor Will Ferrell.

Ferrell, in his guise as Anchorman‘s Ron Burgundy, peppered the 36-year-old with questions that included:

– Would you describe your game as [like] a silky gazelle?
– Are you a witch or a vampire?
– There’s a rumour going around the locker room that you only eat wombat meat as your secret to fitness?
– Have you ever tasted it [wombat meat]?
– Do you get tired of fans screaming ‘C’mon, Roger’?

Federer took the questions in good spirits, laughing along with the crowd while confirming that he has never eaten wombat, doesn’t want to be a witch or a vampire and likes being reminded of his name.

"Roger, would you describe your game as a silky gazelle?"

The 36-year-old also showed off some new shoes on Tuesday evening, emblazoned with a picture of Flinders Street Station and the number five – a reference to his five singles wins at the Open.

Is that Flinders Street station we can see on your shoes @rogerfederer? 😍#AusOpen pic.twitter.com/HXQuXjWQ6v

She might not have made it past the first round of the Australian Open but 17-year-old Destanee Aiava still showed enough to be compared with women’s tennis legend Serena Williams.

Aiava gave world No.1 Simona Halep an almighty scare on Rod Laver Arena, leading 5-2 in the first set before suffering what she later described as an anxiety attack.

“She is very talented and powerful. I think she is going to be very good in the future,” Halep said.

“I can say she is a little bit like Serena.”

Aiava told reporters later on: “The fact that she referenced me to Serena gives me a lot of confidence in myself.

“I feel honoured, as well, especially coming from her, being the best player in the world right now.

“I’m going to take a lot of confidence out of that match.”

Of course Maria Sharapova would draw German Tatjana Maria in the first round.

The match-up meant that ‘Maria Sharapova’ was on the scoreboard at all times and made life rather difficult for commentators.

#AusOpen 2018: the first time a player has competed against themselves 😂#MariaVsSharapova pic.twitter.com/fRagfjb48S

“Oh my goodness. I don’t want to talk about it … I went to the supermarket to buy blueberries.

“Literally I only went to buy blueberries. I don’t know where my mind was.

“I was already changed into my PJs [after getting home] and thinking, ‘Wait a second, where’s my blueberries?’”

World No.10 Johanna Konta shared her heartbreak after a recent shopping trip did not go to plan.

Daria Gavrilova gets another chance to show her wares on centre court, facing Elise Mertens of Belgium in the night session.

John Millman will come up against 28th seed Damir Dzumhur on Show Court 3.

The Daily Deuce: Will Ferrell interviews Roger Federer, plus a Serena comparison