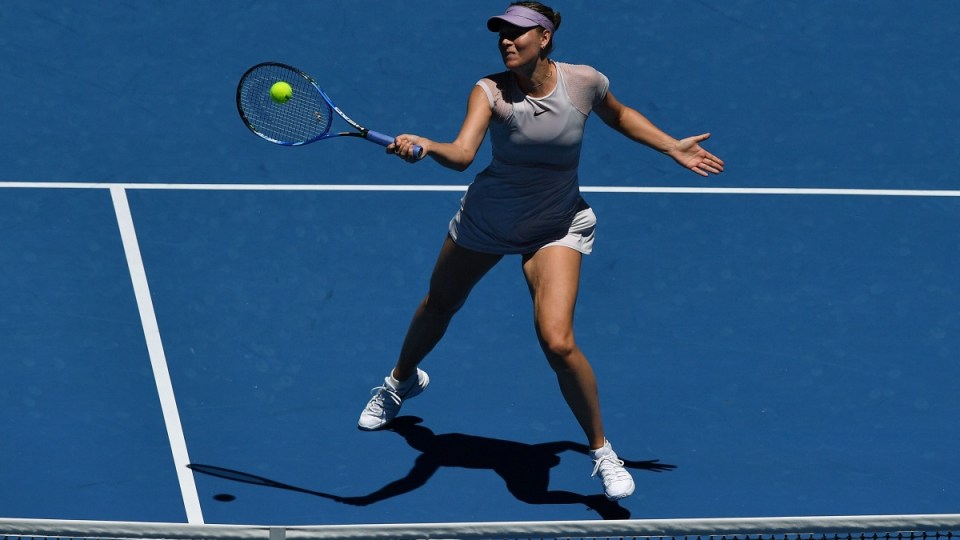 Sharapova's match was her first on the WTA Tour this year. Photo: Getty

Maria Sharapova said things felt “pretty routine” after making her return to the Australian Open for the first time since testing positive to a banned substance at Melbourne Park.

Sharapova was found to have meldonium in her system after a 2016 drugs test in Melbourne, resulting in a 15-month ban from the WTA Tour.

She returned in April but had to wait more than eight months before making her Australian come back.

And Sharapova showed why many consider her a genuine title chance in the absence of Serena Williams, coasting to a 6-1 6-4 win over Tatjana Maria.

The world No. 47 tested her more-fancied opponent in the second set but was outpowered by Sharapova, who struck 22 winners to the German’s seven.

“It felt pretty routine. I have been here a week, practicing on the courts, got used to all the different weather conditions that Melbourne presents to all of us. It’s been good.

“I felt like I have got a lot of things out of the way physically and emotionally and mentally last year … there was a lot of firsts again for me, playing the first tournament [since my ban], first grand slam, and just different feelings.

“But it felt pretty routine today. Just really happy to be back here.”

Despite her involvement in Thursday evening’s draw being widely criticised, Sharapova received a positive response from the Margaret Court Arena crowd who cheered her name as she entered the venue.

The Russian’s trademark shriek was back and so were her powerful returns, giving Maria little chance to settle into the match with some early holds of serve.

Three breaks in the opener set up Sharapova’s win and although Maria improved in the second, the five-time grand slam winner was too good, setting up a meeting with either 14th seed Anastasija Sevastova or Varvara Lepchenko in round two.

Bad news for the locals

Fresh off a first day in which five Australians won through to the second round, hopes were high for further joy on Tuesday.

But at the time of writing, three Aussies had been beaten, with Jordan Thompson the highest profile loser, going down in five tough sets to Argentina’s Nicolas Kicker.

Monday’s tennis news was dominated by reports Novak Djokovic is attempting to lead his male colleagues into forming a breakaway players union, namely to argue for more prize money at grand slams.

His compatriot, Viktor Troicki, shed further light on why the players are unhappy ahead of his second-round meeting with Aussie Nick Kyrgios.

“I talk to Novak a lot about it … if you look at the percentages, what we get from all the income from the grand slams, I think it’s just ridiculous,” he said.

“Even though they say they’re raising the money all the time – they are – but they’re earning much more than they did [in the] last [few] years and that’s a bit of a problem, I think.”