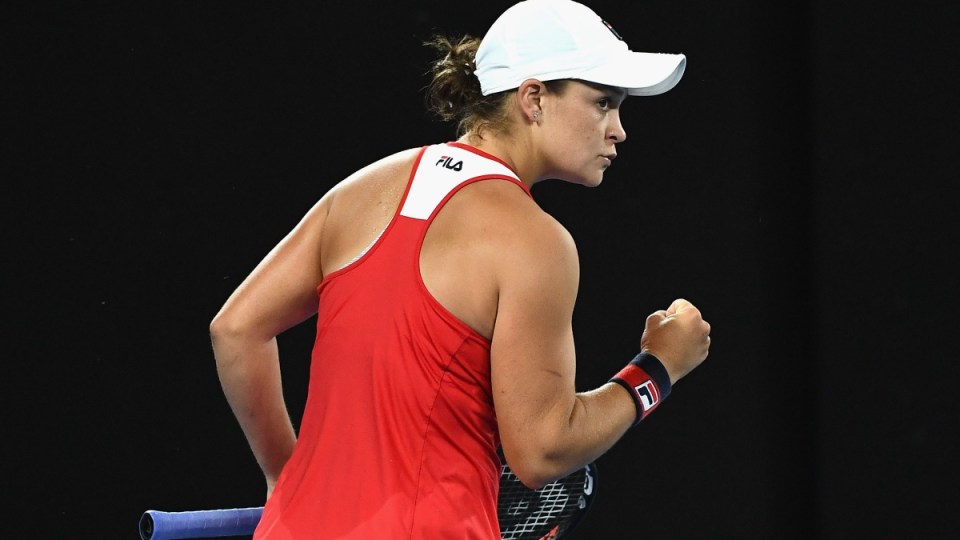 Barty was the only Aussie to taste victory on Tuesday. Photo: Getty

Ashleigh Barty restored some national pride with a hard-fought win at the Australian Open that ended a horror day for local players at Melbourne Park.

Of the eight Aussies involved in first-round singles action on Tuesday, only Barty advanced, thanks to a 6-7 (2-7) 6-4 6-4 victory on Rod Laver Arena against Aryna Sabalenka of Belarus.

The 18th seed had to put up with Sabalenka’s hard hitting and extremely loud grunting throughout the clash, something that she had admitted “was a bit louder than I thought”.

“I knew that I just sort of had to let that go and worry about myself … very happy to get through,” she said afterwards.

When asked by The New Daily about the tough Australian results, De Minaur, who bowed out in four sets to Tomas Berdych, said: “Not a good day at the office.”

“That’s tennis. One day you wake up and you cannot miss a ball. Another day you don’t feel great. It’s tennis.”

Asked the same question, Kokkinakis – who went down in four sets to Sydney International champion Daniil Medvedev – said “it hurts” to see so many Australian players knocked out.

“I didn’t really watch too many of them play … hopefully the guys that lost, we can gel as one and be better,” he said.

The injury-prone Kokkinakis, who was overheard telling the trainer “my whole body is a shambles” during his loss, admitted he was overcome with “emotion and frustration” after suffering calf and shoulder problems during the match.

Despite an outstanding summer which saw him reach the semi-finals in Brisbane and final in Sydney, 18-year-old De Minaur could not upset the 19th-seeded Berdych on Tuesday evening.

De Minaur walked out to INXS hit New Sensation, a nod to his standing within Australian tennis, but he had no answer for Berdych’s serve in an exciting opening set.

The tables turned in the second, as the veteran Czech made 20 unforced errors, but the former world No.4 steadied from there to win well.

“It was a very tough match. He’s a very high-level player with lots of experience … but I’m happy with the effort I put in and the fight,” De Minaur said.

“I managed to get that set but then he was just too good for me. He blew me off the court.”

Earlier on Tuesday, Aiava raced to a 5-2 lead against world No.1 Simona Halep in an encouraging display.

Thompson came back from two sets down to look in control against Argentina’s Nicolas Kicker, 2-0 up in the fifth set.

But a heated dispute surrounding an overrule triggered a Thompson meltdown and he never recovered as Kicker won in five tough sets.

Elsewhere, Popyrin took a set off American wildcard Tim Smyczek before losing while Tomljanovic and Cabrera bowed out in straight sets.

As for the internationals …

In the women’s singles, Garbine Muguruza, Karolina Pliskova, Johanna Konta and Angelique Kerber all progressed without dropping a set.

The women also produced the best match of the day as Andrea Petkovic edged Petra Kvitova 6-3 4-6 10-8 in an epic that lasted almost three hours.

Simon Birmingham: Liberals need to be more proactive on climate and women
French foreign minister hails defeat of Morrison and his ‘notorious incompetence’
Tiger Woods quits PGA tournament after the worst round of his career
COVID claims 45 more lives as nationwide daily cases soar to 18,000
Volodymyr Zelensky: How war will end as Ukraine ‘breaks backbone’ of Russian army
Peter Dutton touted as next Liberal leader as he claimed victory in Dickson
The Daily Deuce: Will Ferrell interviews Roger Federer, plus a Serena comparison
Today's Stories