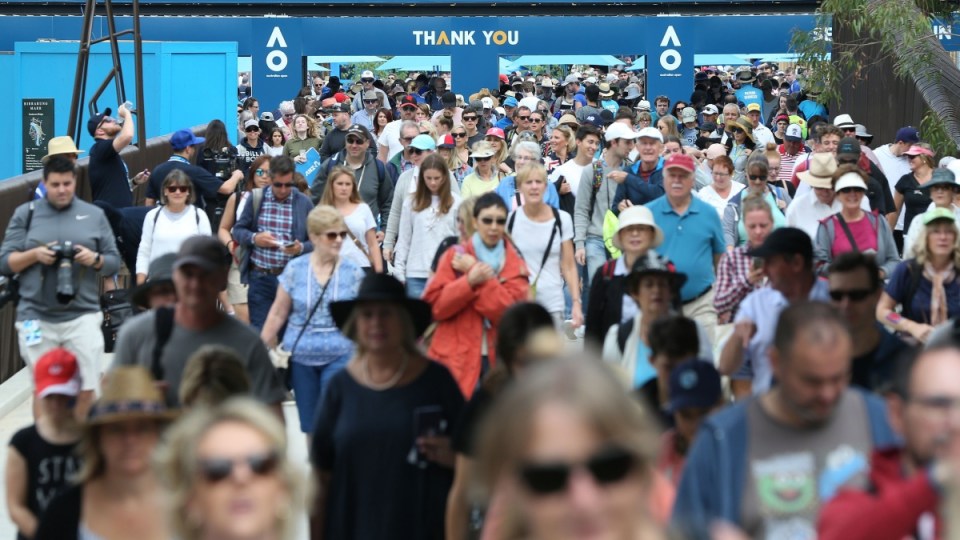 Thousands of tennis fans haven’t let Melbourne’s cold and wet weather keep them away from the Australian Open.

Melbourne’s dreary summer weather has done little to dampen the spirits of tennis fans, with thousands pouring through the gates as the 2018 Australian Open gets underway.

Light showers fell on Melbourne Park about half an hour before the start of play on Monday morning but people still lined up in droves to enter the grand slam site.

American comedian Will Ferrell jetted into Melbourne to catch the first day of the tennis, and is expected to watch No. 1 Rafael Nadal take on the Dominican Republic’s Estrella Burgos and Australia’s home hope Daria Gavrilova against American qualifier Irina Falconi.

A year after clashing in the most anticipated Open final ever, ageless tennis titans Roger Federer and Rafael Nadal are seeded to square off once again for the title, after in 2017 completing the most extraordinary seasons of their decorated careers.

Languishing in the rankings after injury-enforced absences, Federer and Nadal rolled back the years to set up what many believed was one last dance on the big stage.

But after sweeping to all four slams in a wildly retro 2017, the living legends are back in Australia as the world’s top two players and favoured to extend their compelling grand slam rivalry to a 14th year.

With five-time finalist Andy Murray recovering from hip surgery in Melbourne and six-time champion Novak Djokovic and Stan Wawrinka – the only other man to claim the Norman Brookes Challenge Cup in the past decade – also under fitness clouds, Federer and Nadal are the only men under single-figure odds with the bookmakers.

“It’s going to be an interesting first few days of the event,” Tiley said.

“It’s going to be a big-time telling sign for how the rest of the event is going to go.

The world’s best will be playing for a record $55 million in prize money over the next fortnight.

Kyrgios, up against Brazil’s world No.100 Rogerio Dutra Silva, and Gavrilova, playing a qualifier, are among nine Australians opening their campaigns on Monday.

Nadal, Dimitrov, Venus Williams, Caroline Wozniacki and Samantha Stosur are among the other stars in day one action.

Australian Open 2018: Tennis fans and stars turn out on day one