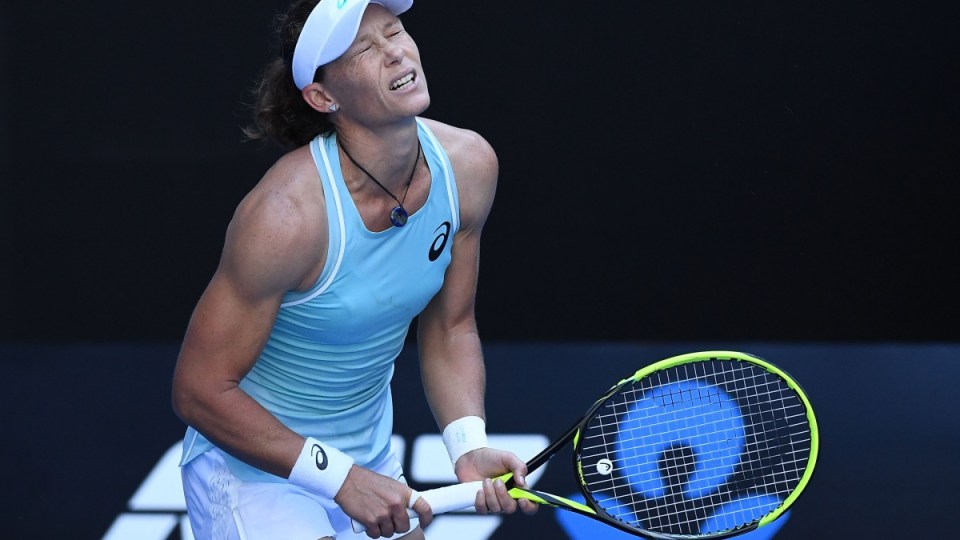 For Samantha Stosur, this was Groundhog Day.

The times might be changing for tennis in this country, shown by the fact five Aussies won singles matches on the opening day of the 2018 Australian Open, but for Stosur, it was more of the same.

The 33-year-old was a set and a break up against Olympic champion Monica Puig, and held a match point in the second-set tiebreak, before falling 4-6 7-6 (8-6) 6-4 on Margaret Court Arena.

Stosur has now been eliminated in the first round of her home grand slam three years in a row and the bigger picture barely makes for better reading.

Despite reaching four grand slam semi-finals, and winning the 2011 US Open, Stosur has never made it past the fourth round in Melbourne.

When asked by The New Daily if she could put her finger on her form at the tournament, Stosur responded: “I just struggle on these hard courts a bit.

“I’m not going to say it’s one particular thing, but if I could play on an American hard court with different balls, then I’d probably be a lot happier here.

“It’s not the same thing over and over again. I think it’s a bunch of different things put together.”

It was impossible not to feel for Stosur in an honestly revealing press conference in which she said she did not feel “ashamed” and explained why she had “courage” and “kind” written on her wristband.

“[It inspires me] just to have courage to be doing what I should be doing out there, not beat myself [up] too much, try to be a bit kind to myself … the things I’ve been working on kind of throughout my game – not the forehands and backhand side of things,” she said.

Stosur’s home record was the elephant in the room during her match against Puig, who even apologised afterwards for beating her opponent.

It was a nice touch from the Puerto Rican, who held her nerve when it mattered to edge what was a tense but sadly predictable encounter.

While Stosur lost, many of her compatriots won in impressive fashion, with Nick Kyrgios cruising to a 6-1 6-2 6-4 win over Rogerio Dutra Silva.

The 21-year-old momentarily lost his cool, yelling “shut the f––k up” to members of the crowd making noise as he served, but it was a minor blip in a win that took just 87 minutes and included 16 aces.

“I thought it was a pretty good performance,” Kyrgios, who admitted to feeling nervous, told reporters.

“I’d like to get on and off the court as quick as possible … save my body for the later rounds.”

Kyrgios will face Serbian veteran Viktor Troicki in round two.

Wildcard Alex Bolt could have joined them on the winners’ list, only to throw away a two-set lead against Troicki, while 10th seed Pablo Carreno Busta needed four sets to see off Jason Kubler.

Labor victory fires up Tamil family’s hopes of return to their Biloela home
ACTU hails Labor’s triumph as the first step to pay raises
Analyst: Sharemarket will be anxious about a Labor pact with Greens
French foreign minister hails defeat of Morrison and his ‘notorious incompetence’
Tiger Woods quits PGA tournament after the worst round of his career
COVID claims 18 more lives as nationwide daily cases soar above 35,000
The Daily Deuce: Coco goes bananas, odd outfits and a teen’s huge payday
Today's Stories