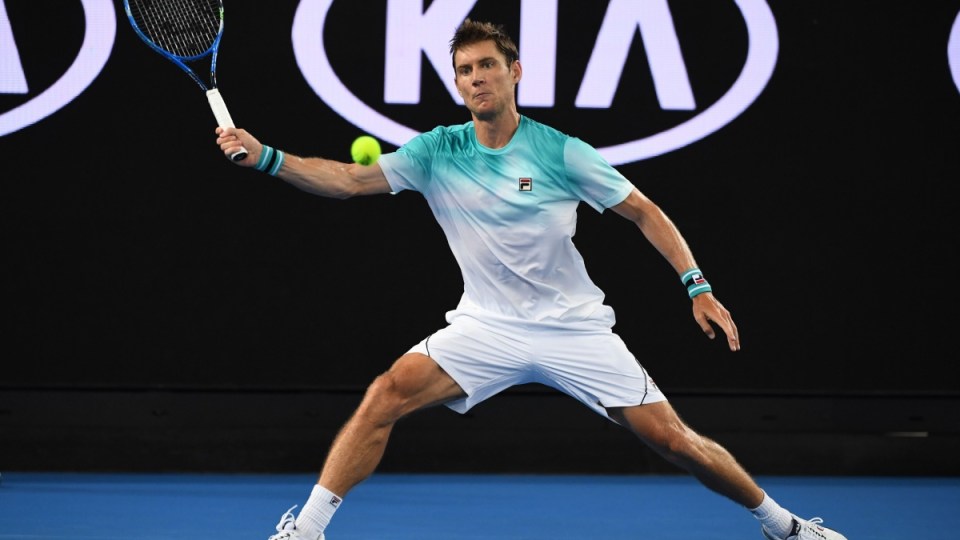 Ebden had great success coming to the net against Isner. Photo: Getty

Local hope Matthew Ebden has pulled off a major shock on day one of the Australian Open, upsetting 16th seed John Isner in four sets at Melbourne Park.

Ebden, ranked 78th in the world, looked comfortable in a 6-4 3-6 6-3 6-3 win over the big-serving American on Margaret Court Arena just hours after reports of a sensational player breakaway hit the headlines.

Isner was one of several players from the United States to suffer surprise defeats on Monday, with seeds Venus Williams, Coco Vandeweghe and Sloane Stephens all sent packing on a day of carnage in the women’s singles.

Ebden had lost all three of his previous meetings against Isner, including a final in the US last year, but he started strongly, winning all 17 points on his first serve in the opening set.

Isner responded strongly in the second but his unforced error count was high from that point as Ebden, spurred on by the home crowd, claimed control of the contest.

He wrapped it up in four sets, in a match in which the longest set took just 32 minutes.

“He’s such a great player and I knew I had to stay composed,” Ebden said afterwards.

“It was a great buzz. Playing at home gives me so much motivation and energy.”

Ebden, Australia’s second-highest player behind Nick Kyrgios, will face Alexandr Dolgopolov of the Ukraine in the second round.

A further eight Australians are in action on day one at Melbourne Park, with Kyrgios set to begin his Open campaign against Brazilian Rogerio Dutra Silva in the night session.

Daria Gavrilova and Samantha Stosur are also in action.

The upsets flowed in the women’s singles on Monday, with fifth seed Venus Williams the biggest casualty.

She was no match for Switzerland’s Belinda Bencic, who smashed 32 winners in an entertaining 6-3 7-5 triumph.

Vandeweghe also lost in straight sets, Hungary’s Timea Babos accounting for her 7-6 (7-4) 6-2, while Stephens threw away a one-set lead against Shuai Zhang of China.

The Daily Mail reported that Djokovic took to a stage in a players’ meeting on Friday to urge his fellow male players to come together and form a players’ union that would be separate to the ATP.

That union could then lobby for additional prize money at tournaments on behalf of the players, who reportedly are keen to see much more offered.

Djokovic’s thoughts about the need for a players’ union echo what tennis insiders have recently told The New Daily.

In its present format, players on the men’s tennis tour are represented by the ATP Player Council.

Djokovic was appointed the organisation’s president in August last year and said at the time he would “do my best to contribute to the evolution of this sport”.

But a move to a players’ union would give the stars of the sport much more power at the bargaining table.

Djokovic refused to go on the record to discuss his reported comments on Monday and Tennis Australia is yet to respond to requests for comment from The New Daily.

Total prize money at this year’s Australian Open is at $55 million, with the winner of the men’s and women’s singles to take home $4 million each.