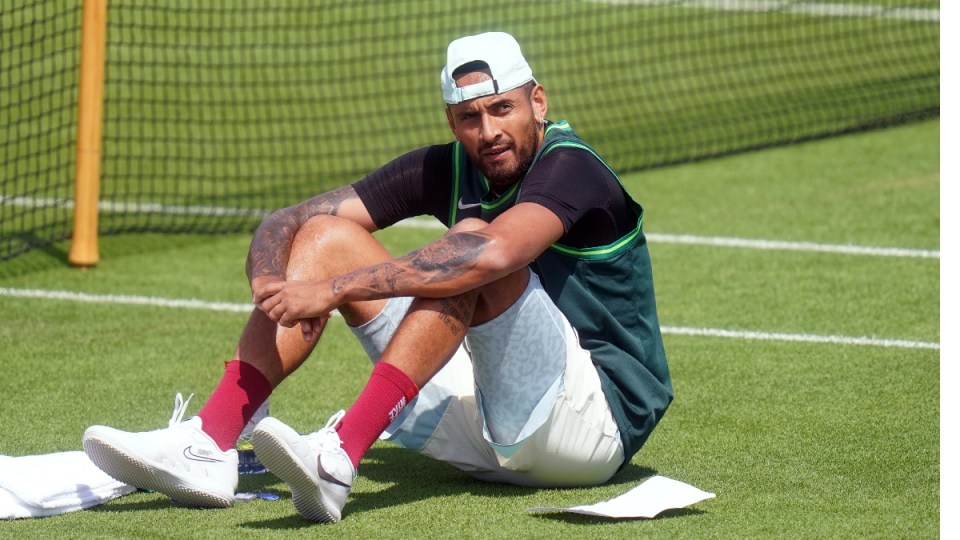 Well, are we ready?

Shortly before 2pm local time on Sunday in London, Nick Kyrgios will emerge from his locker room at the All England Club.

He will not be wearing red Jordans on his feet or sporting a bright red baseball cap as he did before his fourth-round tie this past week. Everywhere he looks there will be officials and uniformed guards to ensure all is whiter than white.

The Wimbledon singles final is a shrine not just to the best tennis players on earth but to history and heritage and, as its members see it, to class.

If he is not already daunted by the prospect of the biggest match of his life, then the walk through the ivy-clad clubhouse to Centre Court will reinforce the enormity of the occasion.

It is a gladiatorial stroll as the finalists, led by a master of ceremonies, shuffle down the long first floor corridor stuffed with trophies and photographs of past champions. A film cameraman records all in one long tracking shot.

At the corridor’s end, the party will turn left and descend a flight of stairs adorned by a couple of large oak banisters – there for the overly nervy perhaps – before pausing before the doors that open directly onto Centre Court. Should Kyrgios glance up, he will see the famous Rudyard Kipling quote of meeting triumph and disaster with equanimity.

It is an adage that targets Kyrgios well. His bearing and behaviour can fluctuate wildly, and there is some irony in that Wimbledon removed the Russians from its tournament, in part, to save the Duchess of Cambridge (Kate, the patron of the All England Club) from the debasement of meeting Moscow’s Daniil Medvedev should he reach the final.

Instead, the Duchess will come face to face with a miscreant of another mould altogether after Sunday’s presentations. But Kyrgios will charm her undoubtedly (you suspect that, secretly, Kate too will relish the intro.)

So, get this. Nick Kyrgios, our man of many characters, is one win from becoming Wimbledon champion, the 13th Aussie male if he makes it.

But it is baggage and not bad luck that has enveloped him these championships. And now the cards, and in the most jumbling of ways, are falling his way.

That he is the first man in the Open era to receive a bye into the final, courtesy of Rafael Nadal’s injured abs, is merely the icing on a fortnight that simply gets ever more surreal.

Just consider what Canberra’s finest has brought with him.

Match one against the journeyman Paul Jubb gave us an average showing from a Kyrgios more focused on outing a line judge as a snitch, wittering incessantly to the umpire and, allegedly, spitting towards a spectator.

‘Why is this most cretinous player at Wimbledon?’ asked a UK tabloid, a not entirely unfair query.

Round four was better if imperfect still – more whinging and cocky from the off, and the red shoes and hat in defiance of Wimbledon’s all-white clothing stance. I know the rules, I wear what I want, smarmed Kyrgios.

His apparel faux pas was as obvious as a strawberry on a fresh bed of cream, but out he strode onto the No.1 show court, not an official with balls in sight.

During the match, two suited and beefed-up bouncers lurked behind Kyrgios at the changeovers, one a near identikit version of long-time BBC Eastenders hard-man Phil Mitchell, the other distinguishable by the range of tattoos stretching upwards over his collar.

And we wondered why no one dared ask Kyrgios what he was wearing.

I’m a fun guy, beamed Kyrgios afterwards. People want to hang out with me. Leave me alone, no, don’t, look at me, no don’t.

On his day, he is near unstoppable, reimagining the way his sport is played – crash, bang, wallop, whinge and repeat. And very quickly too.

As Cash noted in the Tsitsipas match, the ball kids were still haring across the court when Kyrgios began his service motion seconds after the previous point. It was not only professionalism that propelled them so quickly from one side of the net to the other.

Roger Rasheed, an early coach to Lleyton Hewitt, feels Kyrgios is enjoying himself in the latter stages of this tournament.

“Nick has a high tennis IQ, he understands the game and different angles. His big serve is an outlier, he can hit a massive forehand from most parts of the court,” he said.

And don’t be deceived by the dinky backhand approach, this shot is a sure fire winner, says Rasheed.

On a purely tennis level, few will relish facing Kyrgios.

“He offers the unknown, it’s really uncomfortable (for opponents) if he is in his range. He allows them no rhythm on the court.”

Novak Djokovic is the most daunting of foes. The defending and six-time Wimbledon champion is a master of grass, and almost (if not quite yet) at the same level as Roger Federer and Pete Sampras on Centre Court.

Remarkably, Kyrgios has played Novak twice, winning each time, not a set dropped. Despite a public thawing they do not appear to like each other at all. It could get nasty but will be gripping whatever.

Should he win, we may of course see Krygios climb up into his family box where dad Giorgis, sister Halmah, manager Daniel Horsfall, physio Will Maher and girlfriend Costeen Hatzi have been ever present.

Indeed it is these off-court extras about Kyrgios that fascinate. Take his post-match press conferences this Wimbledon.

Before he uttered a word after round one, the tone was set as the ravenous Mr K sloped in with a tray of sushi in hand and proceeded to devour it in front of a befuddled, if unimpressed, paparazzi. He is a large man and the tray was tiny but rather than slurp it down behind the curtain, he decided public consumption was the way to go.

Kyrgios then changed tack with his media call after the straight-sets quarter-final win over Cristian Garin that stunned in its simplicity and power. Engaged but not enraged, this was Kyrgios the humble, the forthright, the expansive, the man.

The red cap and shoes were back but inhabited by an almost entirely different persona as for 15 minutes Kyrgios hardly twitched, fronting up to every question, intelligence and clarity to the fore. Had he been asked his thoughts on the now deposed British Prime Minister Boris Johnson, nothing less than an erudite and insightful response would have been expected. Should the new PM come calling for a new head of communications, then Kyrgios should not be surprised to get the call. He was that good.

The circus never ends, though, as we learned on Tuesday when it was revealed that Kyrgios will face a wholly less appealing court appearance next month.

He is set to appear before magistrates in Canberra in relation to a charge of common assault, a former girlfriend the alleged victim.

Even the obvious interrogation on this topic – and it came right at the start – didn’t outwardly cause any unease in his Garin conference.

“I have been advised by my lawyers that I am unable to say anything at this time – I can’t give you much on that right now,” he said. He seemed genuine.

“It didn’t really affect me at all,” he banged on, before a disclaimer.

“I’m only human. It was hard to kind of focus on the mission at hand.”

Ten minutes in, the probing came back to his legal battle.

“I can’t answer that,” he said, calmness personified, when asked when he heard about the summons.

To his left, the interview supervisor was flapping but Kyrgios was resolute. You had the feeling this was not an avoidance, that he’d have spoken up if he could. In this tuned-down, sombre and reflective mode he was mesmerising.

His last answer was his best. Asked about his mum, Nil, Kyrgios confirmed that she felt it impossible as a parent to follow, let alone watch his matches.

He revealed she has a pacemaker and it’s stressful for her. She has a new grandson, George, a week-old only, and has to feed Nick’s dogs at home in Canberra.

“I’m glad she is able to keep an eye on me from home,” he said before the great understatement.

“It’s been a pretty eventful couple of days for Mr Kyrgios.”