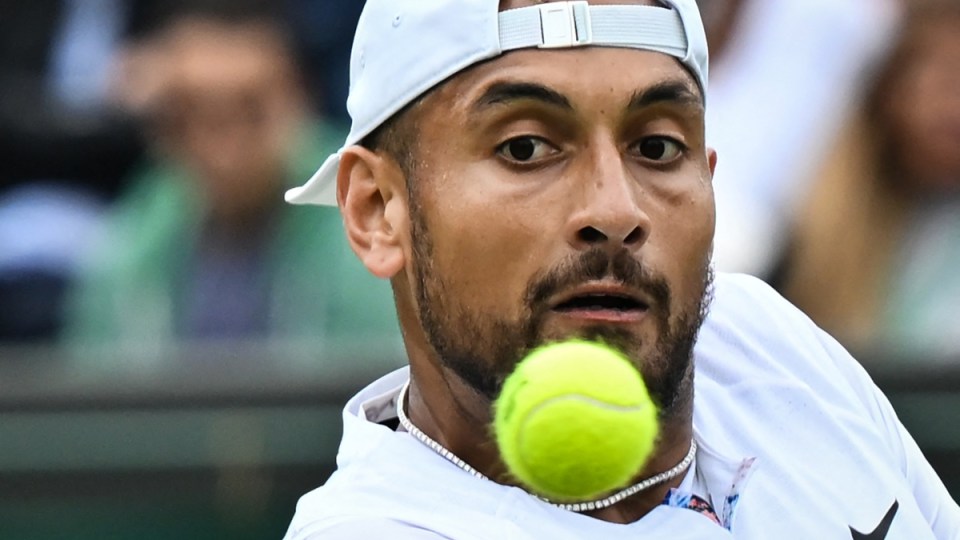 Kyrgios faces Tsitsipas in the third round of Wimbledon on Friday. Photo: Getty
analysis

It is early days still, but should they win tonight, the two highest-ranked men in Australian tennis will be on course for a clash next week that would propel the winner into the Wimbledon singles semi-finals.

The Aussie number one, for anyone confused by the hype over a more combative man from Canberra, is Alex De Minaur, aka Demon, who is seeded 19 and odds-on to overcome British wildcard Liam Broady in Saturday’s third-round encounter.

Whippet quick, pumped yet quietly focused, the 23-year-old Demon has every opportunity to progress deep into a tournament where the draw is opening up nicely. This weekend, though, he will be firmly in the shadows no matter how well he plays.

The reason, of course, is Nick Kyrgios.

Kyrgios grabs the headlines wherever he goes but on Friday he has the chance to hog them wholesale when he faces number four seed Stefanos Tsitsipas for a place in the last 16. It is, without question, the tie of the first week and where, despite his number 42 ranking, Kyrgios has every chance of progressing.

The Greek and the Aussie of Greek and Malaysian heritage have played four times to date with Kyrgios ahead 3-1, the sole victory for Tsitsipas coming in the less-than-serious Laver Cup last year. It will be neither an upset nor a formality whoever wins on Friday.

Kyrgios has enjoyed a mixed tournament so far. He was, by his own admission, off the pace in his first-round win over wildcard Paul Jubb yet was impeccable in seeing off Serbian seed Filip Krajinovic on Thursday in just 85 minutes.

His post-match sparring with the media was just as quick fire.

Take some of these gold-plated prickles from Kyrgios’ press conference after the Krajinovic demolition:

“Super pleased with my performance today. So I’m really interested to see what you have today for me,” Kyrgios began.

“I just feel like I’m comfortable in my own skin. Some people love to just tear me down, it’s just not possible anymore.

“I just want to give people who watch this press conference or watch my tennis to just believe in yourself, be yourself, don’t be someone else up here either. Don’t just say what you’ve been told to say.”

Love him or not, Kyrgios always fronts up.

“I couldn’t care less if there is an investigation about me doing that, to be brutally honest,” he said in relation to his alleged spitting towards a spectator after his round-one match.

“I know what I bring to the sport, one of the most important people in the sport. Do you want to speak about that? Nothing to investigate there because it’s just factual.

“So, yeah, I’m extremely confident in myself, all the challenges I’ve overcome in my life. Proud to be up here and doing it my own way. Being able to produce tennis like that at Wimbledon, it’s a dream come true for any tennis player.”

How do you challenge that?

Tsitsipas will try. Just 23 years old, he appears to have been around forever and is a perennial crowd favourite when playing in Melbourne, attracting partisan and vocal crowds like no other visitor. He has the bearing of a Greek god and plays beautifully, with Roger Federer the closest comparison. Intelligent, pleasant and open, an adman’s dream.

Kyrgios, four years older, is more the rebellious teen, snarling and surly but with the capacity and intelligence to charm too when called for. An adman’s dream also.

The winner is a toss of the coin in many respects but, with a fully focused Aussie, the money would be on Kyrgios.

He will be aided here by his withdrawal from the doubles where he was to pal up with Thanasi Kokkinakis – though even this came with a friction in his press call.

“This is where the media also spin it. I’m a singles player,” Kyrgios said.

“My priority has always been singles. I’ve made quarter-finals here before, I’ve won singles titles. I’ve obviously put singles as my priority.”

Should he win, Kyrgios will face a fourth-round match against an unseeded opponent before a last-eight tie where De Minaur may be waiting. Routes through a draw contain conjecture always but this path is becoming ever attainable.

Remember the ATP Cup? That wondrous new inter-country format that swept through Australian and much of world tennis in January 2020 and briefly threatened to change the face of the sport?

De Minaur, then just 20 years old, was in the vanguard, despatching Alexander Zverev and Denis Shapovalov before teaming up with Kyrgios for an epic doubles win over Great Britain in Sydney. It was raucous, thrill a minute, heady stuff. The future.

The consummate team player, Demon gave his all, tearing his abdomen but playing on and causing him to miss the Australian Open.

A few days later, after a corporate breakfast in Adelaide he slipped out only to be surrounded by the news media. It was not the best timing clearly but he didn’t flinch and answered all queries honestly, eye to eye. That he was desperately disappointed was apparent to even the most thick-skinned journalist but the questions kept coming and Demon kept answering, candid always.

He has been grounded well.

Of Spanish and Uruguayan parentage, Demon has three younger siblings and has flitted between Spain and Australia since his mum moved back to Alicante in Spain when he was eight. He has been a wanderer ever since, but is loyal and Australian to the core.

Davis Cup captain Lleyton Hewitt has long been a believer, even inviting the teenage De Minaur to stay in his Melbourne family home for a couple of years.

There are obvious physical comparisons, both men are resilient and far smaller than the long-limbed, basketball-style giants ever more populating men’s tennis. Young of face, Demon looks like he might be redirected to the junior tournament at any moment but it would be disingenuous to think he is anything but a genuine contender for a world top 10 slot.

John Newcombe has spoken approvingly of the man who won the 2018 Newcombe Medal (jointly with Ash Barty).

“He is very talented, he loves hard work and he loves to win, and he fights for every point. You’d want him on your team. Lleyton is the perfect guy for him.”

But it can be a lot of work when you’re on the sporting small side – and constant questioning of his size grates the 183cm tall Demon.

He will be boosted this fortnight by British girlfriend and fellow player Katie Boulter, who pulled off a stunning comeback to upset last year’s singles finalist Karolina Pliskova on Thursday.

Tennis tour romances can be iffy but the Aussie was quick to show his more thoughtful side at the start of his media conference after beating Jack Draper in three hours in round two.

“Before we talk about my match, can we just talk about Katie Boulter today?” asked De Minaur. “She had a pretty good win herself.”

Demon and Nick aren’t the only Aussies left in the singles. Ajla Tomljanovic faces last year’s surprise French Open champion, Barbara Krejcikova, on Friday with the prospect of the current French Open champion, Iga Swiatek, in the next round should she progress. Swiatek is currently on a record-breaking 37-match winning streak but is yet to convince on grass.

The American Maxime Cressey, perhaps the purest serve and volley artist in the draw, awaits qualifier Jason Kubler whose second-round match was delayed by rain on Thursday, with the Queenslander two sets up and just one game, one serve, away from victory.