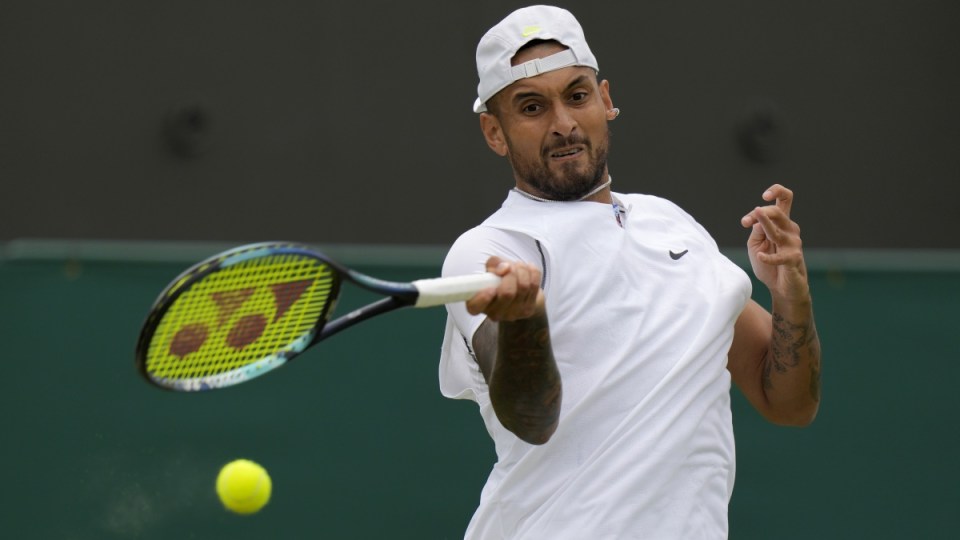 Nick Kyrgios was on his best behaviour as he raced into the third round at Wimbledon. Photo: AP

With no histrionics, no wars and no noise, Nick Kyrgios was the spitting image of a quiet, no-nonsense businessman as he blasted into the third round at Wimbledon.

Two days after being embroiled in unsavoury controversy as he struggled to tame Briton Paul Jubb in front of the vociferous Court 3 fans, Kyrgios was the very model of focus as he knocked out Serbian No.26 seed Filip Krajinovic 6-2 6-3 6-1 with brutal efficiency on Thursday.

On Court 2, Kyrgios demonstrated why he believes he’s one of the best grass-court players in the world as he quietly demolished a capable opponent who’s good enough to have reached the recent prestigious Queen’s Club final.

Quite devastating behind his first serve, the Australian swept to his win in under 90 minutes, having cracked 24 aces and losing only nine points on his own delivery

Those attracted to the idea of seeing Kyrgios, who admitted to spitting towards a spectator in Tuesday’s contest, in self-destruct mode were to be left sorely disappointed as the controversy magnet was on his best behaviour.

There was an early dispute over a line call and a grumble or two towards a coughing spectator before he was serving, but they didn’t even register as the most minor tremors on the normal Kyrgios scale of meltdowns.

In the first set, Kyrgios didn’t drop a single point on serve and only conceded the first on his own delivery after 21 straight points, when already 2-0 up in the second stanza.

Krajinovic just looked increasingly dispirited as winner after winner flashed past him, and Kyrgios finished with a flourish, advancing on the Serb’s serve to pulverise a backhand return for his 50th winner that sealed the deal.

It set up a mouth-watering third-round clash for Kyrgios with either his great Australian pal Jordan Thompson or No.4 seed Stefanos Tsitsipas on Saturday.

Earlier, Ajla Tomljanovic surged into the Wimbledon third round to remain on track for another deep run at the All England Club.

Tomljanovic had too much firepower for Wimbledon debutant Catherine Harrison, taking out the American qualifier 6-2 6-2 in one hour, 26 minutes.

A quarter-final loser to Ash Barty last year, Tomljanovic is doing an admirable job stepping up as Australian tennis’s new women’s No.1 following the reigning champion’s retirement in March.

The 29-year-old is yet to drop a set this campaign, conceding only nine games en route to the last 32.