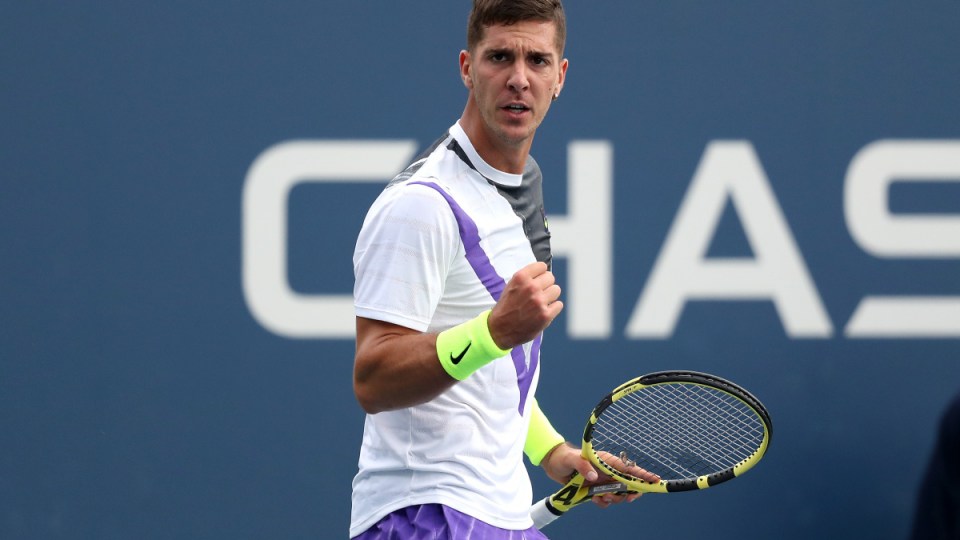 Thanasi Kokkinakis aches to face Novak Djokovic, but first he must get past Kamil Majchrzak. Photo: Getty Photo: Getty

He knows he shouldn’t but Thanasi Kokkinakis can’t help but dream about a Wimbledon show-court blockbuster with Novak Djokovic.

Returning for his first appearance at the All England Club in five long years, Kokkinakis plays Pole Kamil Majchrzak on Monday – almost certainly for the right to lock horns with Djokovic in the second round.

Only a most unlikely slip-up from the top seed and six-time defending champion against Korean world No.75 Soonwoo Kwon could deny Djokovic his passage through.

“Any time you do get the opportunity to step up against one of the greatest of all-time, it’s a dream really. You want to play on those big courts and in a big atmosphere,” Kokkinakis said.

“So I’ve got to win the first one. That’s not going to be easy.

“Kamil is a good player. He hits it really flat, has a very good backhand – so especially on grass it’s going to be tricky match and I’m not looking past anyone.

“But if I do get that opportunity, I’d definitely enjoy it for sure.

“It’s definitely in your mind but probably the other guy is thinking the same thing, to be honest.”

Guarded by experience, Kokkinakis, who has overcome a plethora of depressing injuries just to make it back to Wimbledon in a resurgent season, has been in this position before.

The 26-year-old was slated to square off with Rafael Nadal in the second round of the Australian Open in January.

But two days after claiming his maiden ATP title in his home city of Adelaide, Kokkinakis crashed back to earth with a first-round Melbourne Park defeat to world No.103 Yannick Hanfmann.

Then he was drawn to meet Spanish wunderkind Carlos Alcaraz in the second round at Roland Garros, only to come unstuck in his opener against Albert Ramos Vinolas.

Little wonder that Kokkinakis is trying not to let his mind drift off to Djokovic.

“I know the last two slams I’ve played, if I’d won, I would have played a really big name and I haven’t got past the first one,” he said.

“So I’m not taking anyone lightly.”

First and foremost, Kokkinakis was focused on getting his battered body right for Majchrzak after taking a tumble in his only grass-court outing of the European summer and hurting his left knee at Surbiton four weeks ago.

“I’m still kind of building up. I feel like I’m playing catch up a little bit. It hasn’t been an ideal prep, I’m not going to lie,” he said.

“But I think come match day I’ll be good to go and give it a crack.”

Seven others open their campaigns on Monday, including James Duckworth against two-time champion Andy Murray.

Alex de Minaur and Nick Kyrgios are among nine Australians starting on Tuesday.