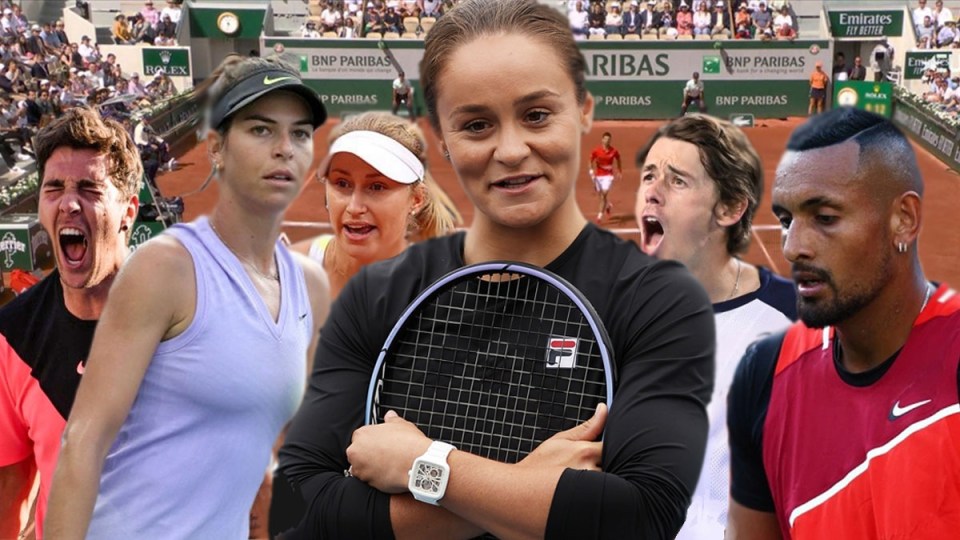 It is a little under 11 months since Ash Barty was crowned Wimbledon champion and just 126 days since she captivated her country by winning the Australian Open singles crown.

Yet tonight in Paris her successor as world number one, Iga Swiatek (21-years-old this week), will fight it out with the teenager Coco Gauff for the French Open singles crown.

It is nothing less than a wholesale upending of the global order and the ramifications for Australia so soon after what was perhaps Melbourne Park’s best-ever Open are huge.

Barty was not alone in being bathed in national acclaim in January. Thanasi Kokkinakis and Nick Kyrgios reshaped how to play and watch double, and there was celebration even in retirement as Dylan Alcott reached his eighth Australian Open quad singles final. The under-appreciated Sam Stosur also took her final bow.

For a tournament initially mired in the Novak Djokovic visa furore, it was a heady fortnight.

But as Paris has shown these past two weeks, much has changed and Australian tennis is no longer looking as rosy as it did in peak summer.

Barty’s shock April retirement is a blow to national pride and standing, but the state of tennis across the nation should not be judged by one player alone and the success of the Queenslander has masked a serious papering over of the cracks.

Only one Aussie, Alex de Minaur, made it to the fourth round of this January’s Open, while only wildcard Madison Inglis joined Barty in reaching the women’s last 32.

The numbers at Paris 2022 are not encouraging either.

Take the men: an impressive eight singles entrants but every one a first-round loser and only the 127-ranked Daria Saville scrambling through to the women’s third round.

Listening to the Australians in Paris is deflating yet offers balance. The will is there, but so too is a feeling of displacement.

Saville and de Minaur pointed to the complexity of playing before partisan throngs in their defeats. Saville conceded she was rattled by a crowd she likened to a zoo.

“I did not expect the crazy fans. I was taken back a little bit,” the 28-year-old said.

“I missed a few shots in the warmup and they were screaming and I was shocked. I’m not making excuses, but I haven’t experienced that, so I’m just going to learn from that, so that’s fine.”

The ever-resilient de Minaur also felt the crowd’s opprobrium in a late-night loss to Frenchman Hugo Gaston – a mirror, maybe, to how opponents of the ‘Special Ks’ (Kyrgios and Kokkinakis) felt in Melbourne this January.

“It felt like kind of an away Davis Cup match and I thrive on that. It was a lot sometimes and you do your best to focus on playing a tennis match,” de Minaur said.

“There’s outside factors that you do your best to control. What I know is I didn’t play my best tennis when I needed to in the super-buster (fifth set tie-break). It’s a shame.”

Name-calling and niggling from the crowd was disappointing, he said.

Fortuitously, Popyrin has no points to defend until September’s US Open and the chance to climb the rankings – he has peeked at 59 – is there.

But first comes Wimbledon, where the 22-year-old is thinking big. Any upheaval around this year’s tournament, stripped of rankings points by the ATP and WTA for its ban on players from Russia and Belarus, has not swayed the Popyrin mindset.

“It is the most prestigious tournament and for me, with or without points I’ll go play,” he said.

“Playing Wimbledon is always an honour so I’m really happy to go and play Wimbledon. The crowd there is unbelievable.

“If you win the tournament and you don’t get any points, you still have a grand slam to your name.”

Yet the wider picture already looks bleak, especially for the women.

Ajla Tomljanovic, ranked 44, is the only Australian woman in the top 100. The Wimbledon cut-off point for direct entry this month will be 104. Don’t hold your breath for the Aussies.

Much is to do with the global evolution of tennis. Whereas America and Australia once dominated, now it is Europe. Check out the Spanish men flooding the upper rankings in the wake of Nadal’s dominance over the past two decades.

And herein lies Australia’s great challenge: bringing through young players fuelled by the exploits of generations they can relate to.

We do not know how Kyrgios and Kokkinakis might inspire youngsters in the way that Lleyton Hewitt did or how sustainable is their high octane approach.

Yet there is hope.

Before Andy Murray, Wimbledon stood as everything good and dismal about British tennis. The best tournament every year but an embarrassment. All that money and plaudits and, eventually, just one star player.

Australia faces a similar scenario. Despite the Djokovic comedy this January, Tennis Australia has cultivated a wonderful tournament but it can blind the public to domestic player shortages beyond the top line.

There are 12 Aussie men in the world top 200 and two or three of them need to stand up now. De Minaur and Kokkinakis have it within them to crack the top 20 regularly while Kyrgios’ 2022 record is outstanding: played 15 and won 11. Yet he simply doesn’t turn out enough, his next tournament, on grass in Stuttgart, will only be his fifth of the year.

That the Stuttgart organisers saw fit to label Kyrgios as “eccentric” on its website is worrying.

There was trash talk last month of a showdown between Kyrgios and a man facing terminal public indifference, Bernard Tomic – 10 years ago Australia’s great hope.

Tomic wanted to show his worth, winner takes all, a $2 million purse. Fortuitously the Kardashian-esque showdown has not come about but for such contrived match-ups to make headlines says much about the dearth of excitement and belief in Australian tennis post-Barty.

Australia puts on a tremendous show every year in Melbourne. But without a greater showing on court, it will ultimately count for little.