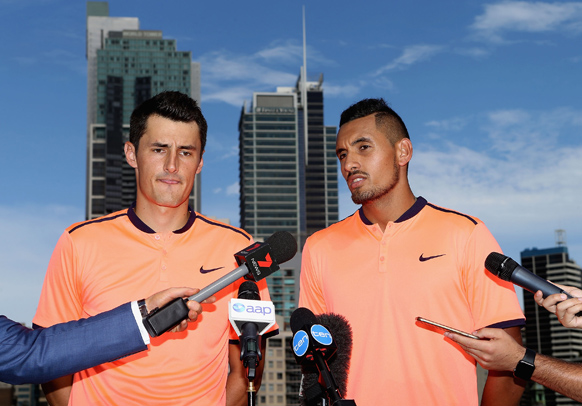 Australian tennis stars Nick Kyrgios and Bernard Tomic have escalated their off-court feud with a back-and-forth barb on social media about their respective tennis careers.

Tomic took to Instagram on Wednesday night to revive the ongoing fight between him and Kyrgios, responding to the Canberran’s recent comment addressing a fan who claimed Bernard was the better of the two.

“Better in what way?” Kyrgios said on the weekend.

“I’ve got a higher career high (ranking). More money, more wins and give back whenever I can.

“It’s time for BT to just quiet down. He ain’t even playing anymore. I got years left.”

Tomic – currently ranked 418th in the world – took offence at the comment, posting screenshots of the quotes and uploading a video of himself rebuking Kyrgios on Wednesday night.

“The only logical explanation is that I’m his idol,” Tomic said.

“He’s always been in my shadow growing up. That’s why any time someone mentions my name to him, it gets under his skin.”

Tomic told his Instagram followers that Kyrgios “knows he can’t re-write history”, referring to his achievements as a teenager, when he became the youngest quarter-finalist at Wimbledon since Boris Becker.

“He knows my style dominates his and he knows he will lose.”

“Bernard, I didn’t realise it was this bad. I low key feel bad now,” the 27-year-old posted.

“Hit me up if you need me to help you remember how to play. Geezus.”

In a separate Instagram story, Kyrgios also laid into Tomic’s financial troubles and his poor reputation as the “most hated athlete in Australia”.

“Let’s not forget the time I payed (sic) for your flight home from Shanghai because you had no money,” he said, accompanied by laughing emojis.

“Hahaha re write history, you are the most HATED athlete in Australia. You are right, no one can take over that.”

The feud between Kyrgios and Tomic had laid dormant over a year, with Kyrgios letting loose on a comparison to Tomic in April 2021.

“I got compared with Bernard Tomic today and I’ve never felt more insulted,” he said at the time.

Preparing your tax return? Here are the COVID-19 tax deductions you may not have heard about
Jason Kubler loss shatters Australian hopes in men’s singles draw at Roland Garros
Today's Stories