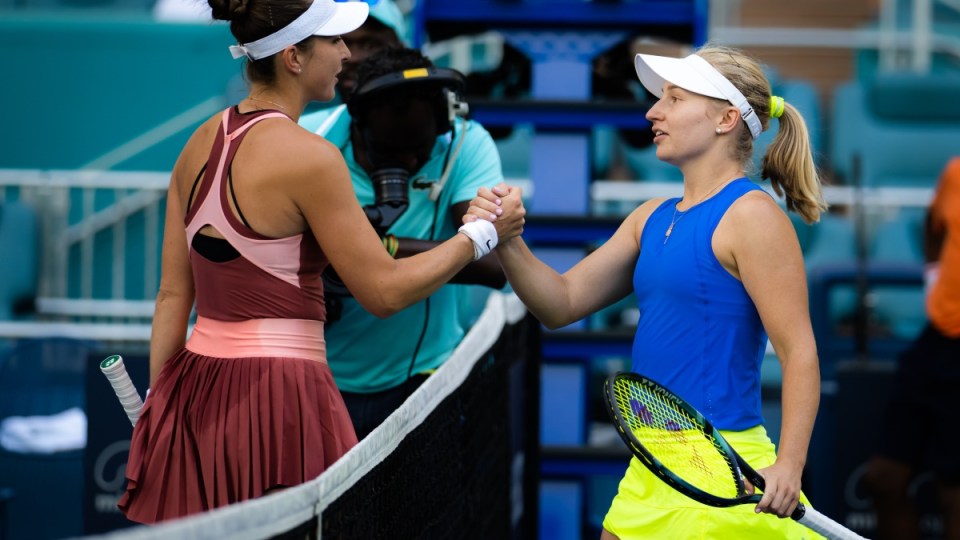 Daria Saville has been beaten in the quarter-finals of the Miami Open. Photo: Getty

Daria Saville’s fantastic run at the Miami Open has come to an abrupt end with Olympic champion Belinda Bencic dominating their quarter-final.

Saville, just the fourth wildcard in the WTA 1000 tournament’s history to reach the last eight, was thoroughly outplayed by Bencic in a 6-1 6-2 defeat for the Australian.

The 22nd-seeded Bencic needed just 69 minutes to advance the last four in Miami for the first time.

Saville had her serve broken three times in each set while she only converted on one of eight break-point opportunities.

The match’s early games were tight as Bencic broke on her third chance in the opening game and saved five break points against her for a 2-0 advantage.

Saville got back to 2-1 before Bencic reeled off the next straight games in a row.

But Saville stopped the rot when she broke serve before getting back to 4-2, only for Bencic to win eight of the last nine points to seal a comprehensive victory.

Despite the defeat the 28-year-old Saville will leap up the rankings from 249th to world No.122 — having been 627th in mid-February as she embarks on a career renaissance after achilles surgery last year.

World No.28 Bencic, who is yet to face a seeded player in the tournament, has won 48 of the 65 games she’s played in her four matches.

“Everything else is a bonus.”

Bencic will play another unseeded player next but former world No.1 Naomi Osaka should pose more than a few problems — although the Swiss ace does hold a 3-0 head-to-head advantage in WTA matches.

Osaka — who hasn’t won a tournament since the 2021 Australian Open — made quick work of Danielle Collins in their last-eight meeting.

The Japanese star romped to a 6-2 6-1 success in just an hour to dispatch Collins, who will still move up a career-high world No.8 ranking.

“I’m glad I was able to get through quickly. I focused on trying to hit a lot of really good returns,” Osaka, who fired 13 aces in the match, said.

Including her remarkable ace count, Osaka struck a total of 25 winners to just three unforced errors against Collins.

Osaka started the event ranked 77th but would finish inside the top 30 if she wins the Miami title.

Who is Peter Dutton? The ex-cop tipped to be the next leader of the Liberal Party
‘Everyone’s just the worst’: Kyrgios in another epic meltdown
Today's Stories