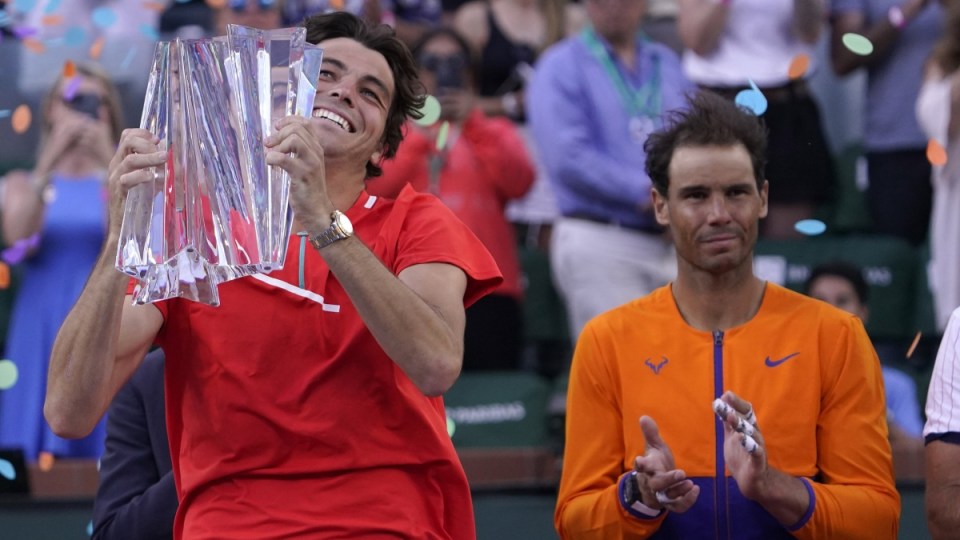 Fritz won 6-3 7-6 (7-5) in two hours and five minutes to become the first American since Andre Agassi in 2001 to win the southern California event, which is touted as the “fifth grand slam”.

There were errors from both throughout as Fritz took the first set and overcame an early break down in the second set.

Nadal fought off a match point on his serve with a forehand winner to tie the second set at 5-all.

He had two break points on Fritz’s serve in the next game, but the 20th seed held for a 6-5 lead.

Nadal held to force the tiebreaker.

Another Nadal error sent the 24-year-old Fritz to the biggest victory of his career — just two hours from where he grew up in San Diego.

“Winning this tournament is just one of those crazy childhood dreams that you don’t think is ever going to happen,” Fritz said.

The first came after he lost the first set with the second after falling behind 5-4 in the second set.

Fritz battled through his own injury issues, after he hurt his right ankle in his semi-final win.

He aggravated the injury during his pre-final warm-up session on Sunday morning but dealt with the pain to score his second ATP Tour title and deny Nadal a record-tying 37th ATP Masters 1000 crown.

“It’s an honour to even be on the same court as this guy,” Fritz told the crowd.

“I grew up watching this guy win everything.”

Nadal’s 20-0 start to the year included the Australian Open, his 21st major championship that broke a tie with Novak Djokovic and Roger Federer.

He was extended in wins over Nick Kyrgios and Carlos Alcaraz this week which pushed the 35-year-old to his limits.

“I tried my best during the last two weeks,” Nadal said.

“Today was not possible. I had a good fight to the end.”

While Nadal to move up one place to third in the rankings when they are updated on Monday, Fritz will jump seven spots to a career-high 13th.