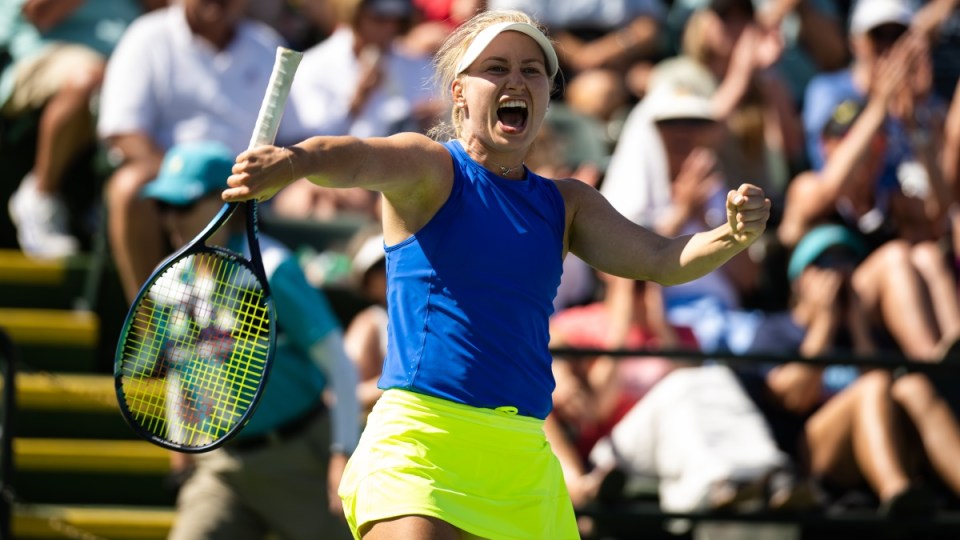 Injury has thwarted Daria Saville’s charge at the WTA 1000 event in Indian Wells with the qualifier unable to complete her round-of-16 match against Maria Sakkari.

Saville called for a medical timeout at the change of ends trailing 4-1 and after a brief spell off court returned to inform Sakkari and the chair umpire that she was retiring.

The 28-year-old Australian had her left thigh heavily strapped during the match and was visibly hampered in her movement.

The resurgent Saville, who has overcome chronic achilles pain to return to the tour, was unable to convert three break-point opportunities in a 13-minutes opening game and then dropped her serve to go further behind.

The qualifier had defeated two seeded players in Indian Wells to advance to a meeting with world No.6 Sakkari.

She recorded her first Top 10 win since 2018 by accounting for Ons Jabeur and followed that up by defeating Elise Mertens in the third round.

Her run in Indian Wells will result in a jump of 160 places to 249th in the world rankings.

Halep, who won the event in the Southern California desert seven years ago, cruised past fellow Romanian Cirstea but Swiatek had to dig deep to outlast three-time major champion Angelique Kerber 4-6 6-2 6-3.

“I felt like she wanted to use her experience and kind of trick me,” Swiatek said.

“I like that because it’s like a new experience for me. I’m pretty proud of myself that I could win against such a smart player.”

Seeking to become the first woman to defend the Indian Wells title in over three decades, Paula Badosa powered past Leylah Fernandez 6-4 6-4 to reach the quarter-finals.

Badosa, who is looking to emulate Martina Navratilova’s feat of retaining the crown in 1990-91, converted three out of her 12 break points and the Spaniard held her nerve in key moments of the tight contest to prevail.

The Sydney champion, who has not dropped a set at the WTA 1000 tournament in the Southern California desert, is looking to secure only the fourth title of her career.